Column: Lawrence just wanted to play, now he must watch 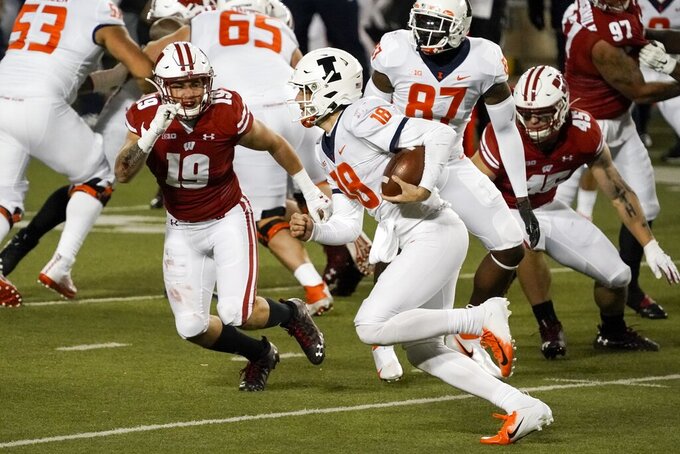 All he can do for now is watch.

The star quarterback of the nation's top-ranked college football team has joined millions of victims of the coronavirus pandemic, becoming another stark reminder of just how tenuous this season really is.

A positive test this week forced Lawrence to sit out Clemson's 34-28 victory over Boston College on Saturday.

More stunningly, he won't be able to play next weekend in one of the biggest games of the season against No. 4 Notre Dame because of Atlantic Coast Conference protocols.

“My symptoms have been fairly mild while I'm following the protocol from Clemson and the ACC," Lawrence wrote on Twitter. “The only thing that hurts is missing an opportunity to be with my teammates this weekend and play the game I love."

It was a cruel twist of fate for a player who energized the movement to have a season when he urged those in charge to “Let Us Play.”

“He's the best player in college football,” Notre Dame coach Brian Kelly said after his team defeated Georgia Tech. “But the virus is indiscriminate. It doesn't care. The virus is going to do what the virus does.”

While it's probably a stretch to say there wouldn't have been a season without Lawrence's pleas — seriously, do we think athletic departments were going to pass up all that television money? — it was still a powerful message coming from a player who will likely be the No. 1 pick in next year's NFL draft.

No one should blame Lawrence — even now, when he’s hopefully recovering with no long-term health issues — for his passionate desire to play one more season with the Tigers.

Lawrence certainly didn't need a third year to improve his draft stock after leading the Tigers to the national championship as a freshman and another trip to the title game last season. But he really seems to enjoy the college game and simply wanted another crack at a trophy with the Tigers.

Whether it was the right stand to take will likely be debated for years to come as frightening news just keeps on coming from a virus that couldn't care less who wins on Saturdays.

The tally of new U.S. cases has climbed near 100,000 and shows no signs of abating — especially in the Midwest, where state after state keeps reporting new highs for daily infections.

Those states are essentially the footprint of the Big Ten, which initially chose to hold off playing at least until after the first of the year.

We still think that was the proper call, especially now. But when three other major conferences decided to take the field, the Big Ten (as well as the Pac-12) buckled to recruiting and financial pressures to hold an abbreviated season that began last weekend.

It was a horrific bit of timing, coming right in the midst of the worst numbers yet for a worldwide health crisis that shows no signs of abating.

No. 9 Wisconsin was forced to cancel its game Saturday at Nebraska and pause team activities for at least a week after at least 22 people in the program — including coach Paul Chryst — tested positive for COVID-19.

“We're still having additions in our cases, and that's something we've got to get our arms around and control it," athletic director Barry Alvarez said on ESPN's “College GameDay.”

Peters’ backup, Isaiah Washington, also missed the game due to contact-tracing protocols. In all, 12 Illinois players were scratched, including kicker James McCourt.

Forced to go with its fourth-string quarterback, Illinois lost to Purdue 31-24.

Under Big Ten rules, Peters and Moore will have to sit for 21 days — missing three games in an eight-game regular season — before they are eligible to return.

While Chryst understood the decision to postpone Wisconsin's game, he was kicking himself for being part of an outbreak so early into a season that had taken so long to get off the ground.

“When you have a hand in it," he said, “that’s where there’s disappointment.”

It's not known when the Badgers will return to the field.

Wisconsin has only one other quarterback on scholarship.

Lawrence will miss the game at Notre Dame under ACC guidelines that require him to sit out at least 10 days.

“I hate that I can’t be there, but I’ll be watching from isolation and pulling for our guys while I wait for the opportunity (to) rejoin the team," Lawrence said.

In the meantime, freshman DJ Uiagalelei will handle the quarterback job for the Tigers.

Before learning of his positive test, Lawrence insisted that he and his teammates were following all the safety protocols.

“We do a good job here staying our social distance, six feet, in our meeting rooms wearing masks, all those things to where we’re not close contacts, we’re not around each other, so we couldn’t transmit the virus,” he said.

Lawrence will surely head to the NFL after this season, where speculation is rife over who might be in position to land him with the top overall pick.

He might want to consider moving on even sooner.

There is no real joy to this season. Wins and losses are becoming more and more trivial.

The only goal that matters is getting to the end with everyone alive.

Paul Newberry is a sports columnist for The Associated Press. Write to him at pnewberry(at)ap.org or at https://twitter.com/pnewberry1963. His work can be found at https://apnews.com/search/paulnewberry