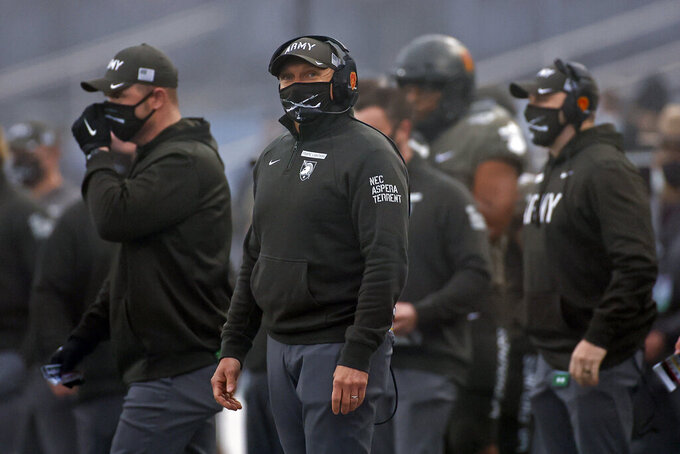 FILE - In this Dec. 12, 2020, file photo, Army coach Jeff Monken watches the team play Navy during the first half of an NCAA college football game in West Point, N.Y. Army, which faces West Virginia in the Liberty Bowl, has gotten a lot of attention and support after nearly being left out of the bowl season when opt-outs left Independence Bowl officials with no opponent for the Black Knights, forcing a cancellation. (AP Photo/Adam Hunger, File)

Army is playing West Virginia in the Liberty Bowl thanks to Tennessee's withdrawal because of COVID-19 issues. Army can notch its third season with double-digit victories in Jeff Monken’s seven years as head coach. The senior class already has an academy-record 35 wins. Without Monken, only one other Army team has a 10-win season. West Virginia is in its 38th bowl all-time, and the Mountaineers could win their first game this season away from Morgantown this season.

The Army triple option against the West Virginia defense. The Black Knights are averaging 281.3 yards rushing per game to rank fourth nationally and have scored 33 touchdowns on the ground, two behind national co-leaders Alabama and North Carolina. The Mountaineers rank 24th nationally against the run, allowing 126.2 yards per game and eight rushing touchdowns this season.

Army: Sophomore QB Tyhier Tyler. He is Army's top rusher with 502 yards and led the Black Knights to victory over archrival Navy in his second start by running for 96 yards. He was hurt in a helmet-to-helmet collision in a season-ending win over Air Force, Monken says he’s been practicing and is ready to go.

This is the ninth bowl in Army's history and fourth with coach Jeff Monken. The Black Knights have won four straight bowl games. ... This is Army’s first berth in the Liberty Bowl sponsored by AutoZone and third for West Virginia. ... The Mountaineers have played in a bowl 17 of the past 19 years and are 15-22 all-time, including 0-2 at the Liberty Bowl. The Mountaineers played Utah in the 1964 Liberty Bowl at the Atlantic City Convention Center, the first college bowl game played indoors. The Mountaineers also played Texas A&M in the 2014 Liberty Bowl. ... Army beat Duke 21-16 at Michie Stadium on Nov. 11, 2017, to complete an undefeated season at home. It was Army’s last win over a Power Five team. ... The Black Knights have seven players with over 230 yards rushing. ... Army is second nationally in total yards allowed giving up 271.1 yards a game and second in scoring defense with an average of 14 points a game. ... West Virginia ranks fifth in total defense, giving up 297.2 yards a game. All-American defensive lineman Darius Stills has 3 1/2 sacks and 7 1/2 tackles for loss. ... West Virginia RB Leddie Brown ranks 14th nationally with 945 yards rushing.