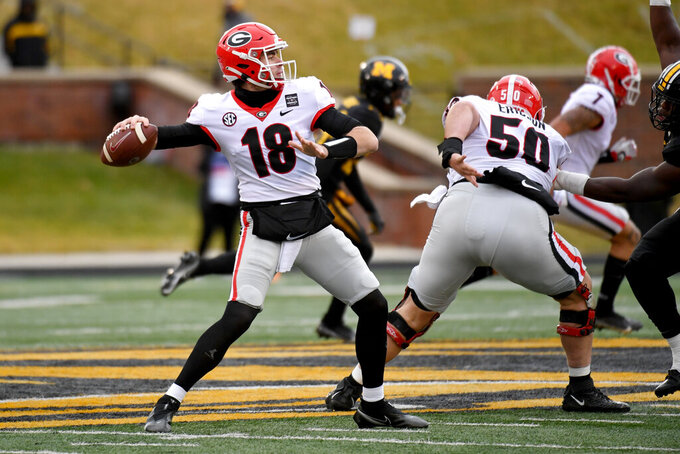 COLUMBIA, Mo. (AP) — Georgia quarterback JT Daniels is confident that wherever he tosses it, George Pickens will make the catch.

Daniels threw three touchdown passes, two of them to Pickens as No. 12 Bulldogs broke away from Missouri 49-14 Saturday.

Zamir White ran for 126 yards and a score while Georgia (7-2) dominated the line of scrimmage on both sides of the ball. Missouri (5-4) managed just 200 yards of offense after topping the 600-yard mark each of the past two weeks.

“I think Missouri’s a good football team — I really do — and they’re a team that’s growing, young, getting better, and we were able to overpower them in the second half,” Georgia coach Kirby Smart said.

Smart said his players had great practices on Monday and Tuesday despite being eliminated from contention for the SEC championship game last weekend. Florida and Alabama, the two teams that beat the Bulldogs this year, will play for the title next week.

This game was tied at 14 when Pickens reached to his shoe tops to gather in a 36-yard touchdown toss from Daniels in the final minute of the first half. The pair connected again on the first drive of the second half, with Pickens catching a short pass on a slant route, stepping out of a tackle attempt and racing 31 yards for a score.

Daniels completed 16 of 27 passes for 299 yards. Pickens caught five passes for 126 yards and James Cook caught a TD pass and ran for a score.

Missouri’s Mason Pack blocked a punt deep in Georgia territory to set up Larry Rountree’s 1-yard touchdown run that made it 14-all with 1:20 left in the second quarter.

Rountree, who had rushed for more than 180 yards in each of the last two games against Vanderbilt and Arkansas, managed just 16 yards on 14 carries.

Connor Bazelak completed 17 of 28 passes for 139 yards and ran for the Tigers' other score.

Missouri: Drinkwitz’s first season, the Tigers have taken care of business against the SEC’s middle- and lower-tier teams, but there is a talent gap between them and the league’s elite. Missouri, which checked into the College Football Playoff rankings at No. 25 this week, has been outscored 128-52 in losses to Alabama, Florida and Georgia.

Georgia: The Bulldogs are a different team with Daniels at quarterback. In his three games as starter, Georgia is averaging 41.7 points. The Bulldogs averaged 28 points before Daniels took over.

Missouri: The Tigers visit Mississippi State on Saturday in the regular-season finale.

Georgia: The Bulldogs complete the regular season with a home game against Vanderbilt on Saturday.