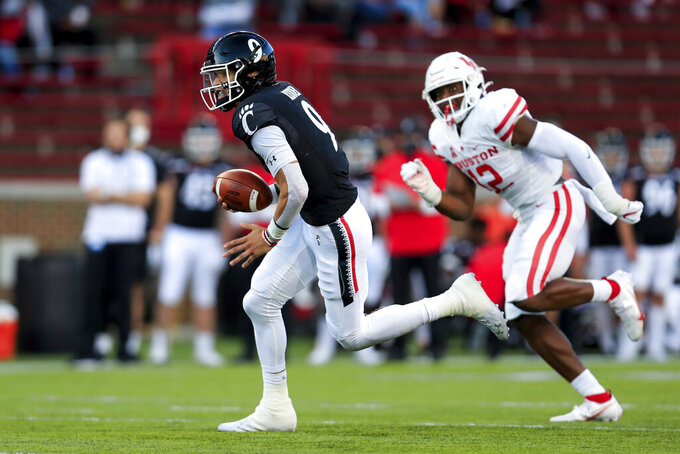 Cincinnati quarterback Desmond Ridder, left, carries the ball for a touchdown during the first half of an NCAA college football game against Houston, Saturday, Nov. 7, 2020, in Cincinnati. (AP Photo/Aaron Doster)

He added the Bearcats' resume with a stellar performance Saturday.

Doaks rushed for a career-high 184 yards, Desmond Ridder ran for three scores and threw for another, and No. 6 Cincinnati rolled to a 38-10 victory over Houston.

“No doubt, why not?” Doaks said when asked about the Bearcats becoming the first team from a non-Power 5 conference to reach the playoff. “Why not get a shot? We put in our work just like other teams do. Our goal is to make a statement every week. Go out there and dominate.”

Ridder rushed for 103 yards and threw for 162. He has accounted for 13 touchdowns (eight running, five passing) in the past three games.

The Bearcats rushed for 342 yards.

“It was kind of a monotonous, grinding kind of game,” coach Luke Fickell said. “With our ability to do what we did, run the football, it really helped our defense.”

Doaks found a huge hole on a third-and-1 play in the first quarter and raced 72 yards, setting up his 2-yard touchdown run two plays later. Doaks' career-long run came on his second carry.

“It really warms you up, gets you ready to go,” he said. “I got in the end zone, eventually.”

Doaks had 109 all-purpose yards in the first quarter. He had 11 carries for 166 yards by halftime.

The Bearcats' read option with Doaks and Ridder kept the Cougars defense off balance all afternoon.

“If I’m having a big day, the ends are taking the other one,” Ridder said. “We’re just opening holes for each other.”

“Their quarterback is hard to tackle,” Cougars coach Dana Holgorsen said. “Give them credit.”

Cincinnati scored twice in the final two minutes of the first half for a 28-10 lead, starting with Ridder's 32-yard touchdown run. A 48-yard run by Doaks led to a 4-yard TD pass from Ridder to tight end Josh Whyle, who made a leaping catch in the end zone.

The banged-up Cougars were without playmaking wide receiver Marquez Stevenson and several others, but were out of the game by halftime.

“We’re just not good enough to compete with a team like Cincinnati right now,” Holgorsen said.

Holgorsen spoke this week about the importance of establishing the running game, but it never really got going. Kyle Porter, the team's leading rusher, had 69 yards on 16 carries. The rest of the team had 24 yards on the ground as the Cougars were outrushed 342-93.

“They aren’t complicated defensively,” Holgorsen said. “It started up front. They beat us on the line. We have to get better at running the ball.”

Just before halftime, Houston had a first down at the Bearcats 11 following a 54-yard catch by Nathaniel Dell. The Cougars settled for a field goal to get within 21-10. But a 45-yard kickoff return by Tre Tucker set up a 28-second scoring drive that put the Bearcats ahead 28-10 at the half.

“Those are body blows,” Fickell said. “We get the stop on defense and Tre Tucker almost takes it to the house. Those are blows, mentally and physically.”

With the national buzz growing around the Bearcats, Fickell said he was impressed with the way his players responded this week.

“Tonight was as impressive to me because of all the noise,” Fickell said. “The coaches have done a great job delivering the right message. There was a lot of unselfishness.”

The Bearcats haven't lost at home since Nov. 10, 2017, when they lost 35-24 to Temple. Cincinnati is one of four teams to go undefeated at home the past two seasons, along with Ohio State, Notre Dame and Clemson.