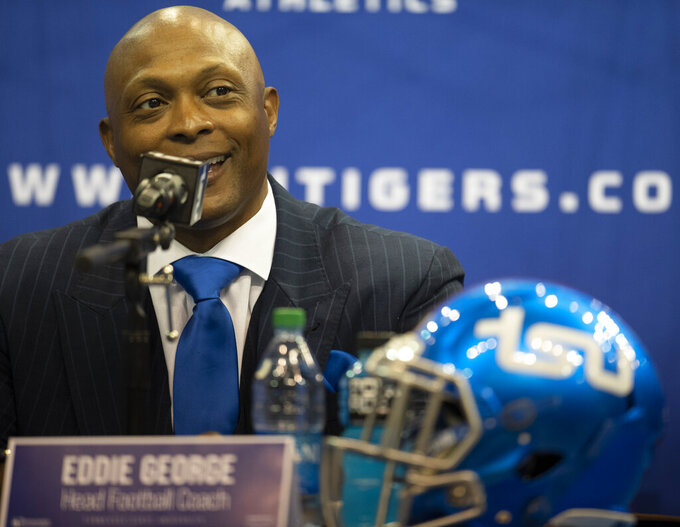 FILE - In this April 13, 2021, file photo, New Tennessee State University NCAA college football coach Eddie George smiles during a news conference in Nashville, Tenn.. George is one of several high-profile former pro athletes to take on athletic programs at black colleges and universities at a time when the country seems more than ready. (George Walker/The Tennessean via AP, File)

He's one of several high-profile former pro athletes to give up their lavish retirement lifestyles, roll up their sleeves and accept historically Black colleges and universities coaching positions at a time when the country seems ready to embrace social change.

“It’s high risk, high reward," SWAC Commissioner Charles McClelland said. “The biggest challenge that high-profile coaches have to deal with coming to historically Black colleges and universities is that those resources that they are accustomed to are not necessarily there all the time.”

Many of the high-profile coaches earned tens of millions in salary during the pro careers and now are working in athletic departments operating on a fraction of those dollars.

George, being paid $400,000 a year, says it's a calling for him to be coaching at an HBCU. He didn't have to relocate to take the job at Tennessee State, which is where he first practiced when the then-Houston Oilers relocated from Texas to Tennessee. Nashville also has been his home for a quarter century.

“You want to enhance that world and bring a light to the HBCU world and the great storied programs that have produced NFL talent and great talent into the world, period,” George said. "That comes along with it. But at its core, at its impetus, it’s always first and foremost these young men that are in this building.”

Seeing former professional athletes coaching at an HBCU is nothing new for anyone paying attention.

Super Bowl MVP Doug Williams went to Grambling State in 1998 for his first of two stints coaching his alma mater. McClelland hired former WNBA star and Naismith Hall of Fame player Cynthia Cooper in 2006 when he was AD at Prairie View and again at Texas Southern. The woman who has a statue on the Nike campus helped bring gear Prairie View normally couldn’t get.

Still, it's hard to imagine the timing could be any better for this new wave of coaches. George, Sanders and others have elevated HBCUs to a level where they’ve never been before. McClelland and administrators like him hope all the attention translates into new revenue streams and increased support.

The SWAC has led FCS attendance in 43 of the last 44 seasons, and McClelland said the market, excitement and fan bases were there already — now it's being fueled by the celebrity status these coaches bring to the sidelines.

All of it will be on full display Saturday night when George and Tennessee State square off against Jackson State and Sanders in the Southern Heritage Classic in Memphis.

The game usually draws nearly 50,000 fans, but McClelland said with the former NFL standouts coaching against each other the matchup on ESPN3 will attract new fans.

“Individuals that might not necessarily know anything about Tennessee State or Jackson State now know something about Deion Sanders and Eddie George (and) are going to watch that game, and we can open up our brand to other entities and other individuals," McClelland said. "So it is definitely significant.”

George is looking forward to stepping into the spotlight at the Southern Heritage Classic, which pits schools once coached by College Football Hall of Famer “Big” John Merritt.

“This is another opportunity for us to showcase our talent, to showcase our coaches, the brand of our schools, and show the the pageantry and the tradition of HBCU football on a grander scale, hopefully,” George said.

He and Sanders have been on the sidelines less than a year — George was hired in April, and Sanders was introduced Sept. 21, 2020 — but have already made their presence felt.

Sanders’ connections helped his Tigers get uniforms by Under Armour with Walmart assisting with a new turf field. George has former NFL head coach Hue Jackson as offensive coordinator and is pushing for a new turf field for TSU’s indoor practice facility and other improvements.

Tennessee State kicked off a fundraising campaign the day George was hired, though the new coach says he's being patient as he learns what the university has done before he arrived and how he can help use his corporate ties best now.

It also helps that these coaches have personal experience dealing with endorsement deals with new name, image and likeness rules. Sanders is in a new ad for Aflac, while George is part of Nissan's Heisman House commercials that roll out each season.

“No one wants you to endorse their product if you’re not good,” Sanders said.

Ultimately, winning games is how all coaches are measured.

George knows he won't get some athletes determined to play at a program like his alma mater Ohio State or Alabama. His pitch to players to attend TSU is for them to lay the groundwork for the next stage of success at a program that has produced the likes of Ed “Too Tall” Jones and Claude Humphrey. Then he sprinkles in the promise of growth with a new stadium and better facilities.

“We’re going to try to get to the FBS level, know those are our aspirations to take this program to new heights,” George said of his lure to players and recruits. “So you’re our forefather. You’re building bricks and layers, a foundation for what’s to come.”

How long Sanders and George remain in their respective positions is anyone's guess. College coaches leave, get fired, move on; it's part of the business. But even if they use HBCUs as stepping stones to other endeavors, McClelland said it's a win-win for both the conference and the schools.