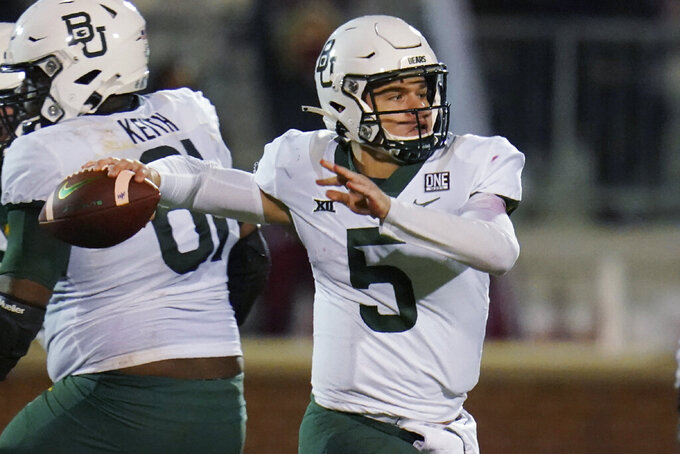 FILE - Baylor quarterback Charlie Brewer prepares to throw a pass during the first half of the team's NCAA college football game against Oklahoma in Norman, Okla., in this Saturday, Dec. 5, 2020, file photo. Charlie Brewer is on a mission to make a name for himself as Utah's newest quarterback. Since his high school days, when he was lightly recruited before signing with Baylor, Brewer has driven himself to prove his doubters wrong. Now his competitive spirit is giving him the inside track to win the starting quarterback job with the Utes. (AP Photo/Sue Ogrocki, File)

SALT LAKE CITY (AP) — Charlie Brewer is on course to make a name for himself as Utah's newest quarterback.

Since his high school days, when he was lightly recruited before signing with Baylor, Brewer has been driven by a desire to prove doubters wrong. That competitive attitude helped him become a four-year starter with the Bears.

“I’ve just always had a competitive nature about me and always enjoyed competing,” Brewer said.

Now he has the inside track on the starting quarterback job with the Utes.

Brewer brought a track record of success to the Utes. He helped lead Baylor to a runner-up Big 12 finish and a Sugar Bowl berth during his junior season in 2019, two years after the Bears went 1-11.

When Brewer left Baylor, he departed as the No. 2 ranked passer in school history. He was also just the second Bears player to eclipse 10,000 career yards in total offense, after tallying 1,039 rushing yards over four seasons.

“All those reps he had in the Big 12 were prepping him for when he got here,” Utah coach Kyle Whittingham said. “He’s a guy that’s played so much football at this level.”

Brewer came to the Utes as a graduate transfer following the 2020 season, joining a quarterback room that includes Cam Rising, Texas transfer Ja’Quinden Jackson and freshman Peter Costelli. Rising won the starting job a year ago but suffered a season-ending shoulder injury in the opener against Southern California. The redshirt sophomore has not participated in spring practices while he continues to rehab the shoulder.

Rising’s absence opened the door for the other quarterbacks to get additional reps and Brewer quickly rose to the top of the depth chart over the spring. Whittingham praised Brewer’s performance in the team’s most recent scrimmage.

“He does all the little things that make a difference between being just average or being really good,” Whittingham said. “He’s paid that price and it didn’t start during spring ball. From the day he set foot on campus, he’s been in that playbook and in the film room. What we see out on the field is a product of all that hard work.”

Brewer has also built good chemistry with offensive linemen and receivers who have been in the program for several years. Utah returns its leading receivers, Britain Covey and Brant Kuithe, from the past two seasons. The Utes also return all five starting offensive linemen from 2020 — a group headlined by first-team All-Pac-12 selection Nick Ford that has combined for 98 total starts.

Their knowledge and experience have made it easier for Brewer to grasp Utah's offense.

“A lot of people around me — coaches, teammates — have made it a smooth transition for me,” Brewer said.

Brewer led Baylor to a New Year’s Six Bowl in his junior season. He’s confident Utah can achieve a similar level of success this fall and points to the potential to compete for a Pac-12 title as a major reason he chose to come to Salt Lake City.

“I think we’ve got the guys to do it,” Brewer said. “Now it’s just about the little things that go into it. I definitely see the potential.”

Utah fans will get their first live look at Brewer at the team’s annual spring game Saturday. The school is allowing 6,500 fans to attend with masks and social distancing required for all attendees.

Normally a free event, Utah charged $10 per ticket or $22 for a four-ticket bundle. Funds from ticket sales will be donated to the new Ty Jordan Memorial Scholarship Fund. The school created the fund in honor of Jordan, Utah’s former running back who died in an accidental shooting in December.