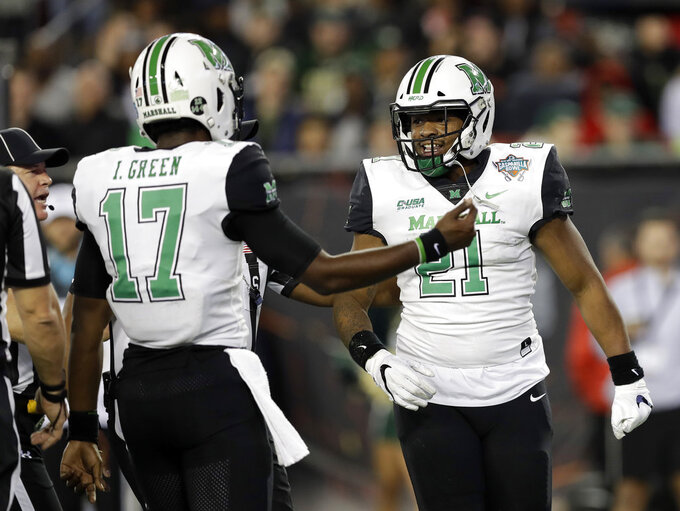 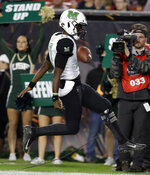 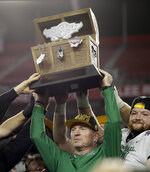 TAMPA, Fla. (AP) — It was a family affair as Marshall ended the season with another bowl victory.

"It's fun to get to play my senior year with my cousin, sharing the experience," said Davis, who was the game MVP.

"It was my first time contributing to a (bowl) win," Green said. "It feels good to be able to show people that just because I'm a freshmen doesn't mean I can't play this game like I'm not a freshman."

Green also had a touchdown run in the first quarter, while Davis' second TD — from 16 yards out — put the Thundering Herd ahead 38-20 with 6 1/2 minutes to play.

Davis had 94 yards on 14 carries, while Brenden Knox gained 93 yards on 12 rushes — all during the first half.

"Keion is a special player," Holliday said. "He makes things happen every time he gets the opportunity to play."

Blake Barnett, slowed by shoulder and ankle injuries, replaced Chris Oladokun for South Florida 10 minutes into the game and completed 11 of 23 passes for 212 yards. Barnett, a transfer from Arizona State who also started one game for Alabama in 2016, sat out two of the Bulls' previous three games.

USF (7-6) lost the bowl game played on its regular-season home field to end the season by losing six in a row after a 7-0 start.

"We know this, there's work that needs to be done in the program, and we've got to go get it done," coach Charlie Strong said.

Green scored on an 10-yard dash and Anthony Anderson had an one-yard TD run over a 37-second span as Marshall took a 14-0 lead with 4:43 left in the first. The second score was set up by Darius Hodge's fumble recovery and 29-yard return after Barnett couldn't handle a high snap.

After USF wide receiver Tyre McCants took a direct snap and threw a 38-yard touchdown pass to Randall St. Felix, the Thundering Herd went up 21-7 during the final minute of the first on Knox's eight-yard TD run.

St. Felix had six receptions for a school-bowl record 165 yards.

Marshall has outscored its opponent 101-39 in the first quarter this season.

USF got to 28-10 on Coby Weiss' 22-yard field goal four seconds before halftime.

South Florida settled for a 31-yard field goal by Weiss on a second-half opening 14-play drive.

"We were in position to make some plays and we didn't make them," Strong said. "We had our opportunities."

Marshall countered with Justin Rohrwasser's 28-yard field before Barnett connected on a 33-yard scoring pass with St. Felix that cut the Bulls deficit to 31-20 late in the third.

Marshall: Green will be back next season to anchor a promising offense as the Thundering Herd try to win eight or more games for the fifth time in six years.

South Florida: Barnett returns in 2019 and being healthy could be key in the Bulls' bid for their first American Athletic Conference championship.