Hokies AD: Fuente 'wanted to move on' now, not be in limbo 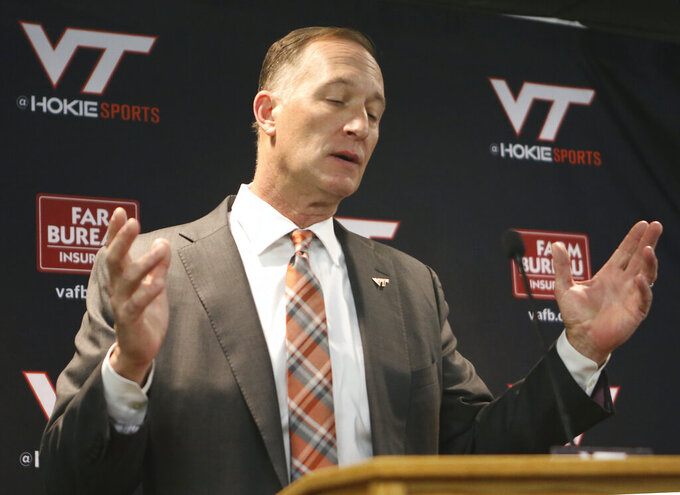 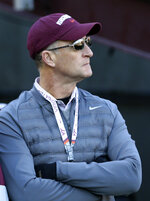 Virginia Tech's Justin Fuente could see the writing on the wall so the Hokies football coach decided he would rather leave the program now rather than wait and be told to pack his bags.

Virginia Tech announced Tuesday that Fuente is out, effective immediately.

Discussions about Fuente's future picked up last Wednesday when Hokies athletic director Whit Babcock informed Fuente in a weekly meeting that his return for another season was far from certain. Instead of remaining in limbo, Fuente “wanted to move on,” the AD said during a news conference Tuesday.

That announcement came after Fuente and Virginia Tech officials worked out the details of his buyout Monday. Fuente and the school agreed to reduce Virginia Tech's buyout obligation from $10 million to $8.75 million. Before the negotiated settlement, according to his contract, if Fuente were to be fired before mid-December he was to be paid $10 million; if he remained in his job until after that time, he was owed $7.5 million.

Babcock said the lack of an identity and consistency were two big factors in his decision to make the coaching change and begin a national search for Fuente's successor. The AD said he would have preferred Fuente finish the season.

The Hokies (5-5) play at Miami on Saturday and finish the season at Virginia.

“This is a place to do something special never before been seen at Virginia Tech,” said Babcock, who was hired in 2014. “Our next coach will get us there. ... We define excellence at Virginia Tech is to rise up and surpass and that’s exactly what we need the next coach to do. And that we fully plan to do."

Fuente, 45, replaced College Football Hall of Famer Frank Beamer to start the 2016 season and had immediate success. The Hokies were 10-4 and won the Atlantic Coast Conference's Coastal Division championship with Fuente earning ACC coach of the year honors, but that success became harder to sustain.

The Hokies started this season with a 17-10 victory over division favorite North Carolina and rose to No. 15 in the Top 25. But after beating Middle Tennessee, they lost four of their next five games, and three of the losses were decided in the final minute.

Virginia Tech still has a remote chance to win its division, but even if the Hokies beat the Hurricanes and Cavaliers, they would need help from other teams to earn a spot in the ACC Championship in Charlotte, North Carolina.

Babcock thinks he won't have a problem finding willing successors.

“We see this as a destination job," Babcock said, listing numerous improvements made to its football facilities and nutrition programs. “Our facilities are in the top one or two in this league."

Finding a replacement with head coaching experience will be a priority, Babcock said, but he wouldn't rule out considering an assistant who has never led a program.

Fuente seemed to be that when he was hired, heralded as creative offensive mind who specialized in developing quarterbacks when he was hired away from Memphis. He worked with TCU's Andy Dalton when Dalton led the Horned Frogs to a 13-0 season capped by a Rose Bowl victory over Wisconsin. Fuente also worked with Paxton Lynch at Memphis, and he became an eventual NFL first-round draft choice by Denver, though he's now in the Canadian Football League.

In his tenure at Virginia Tech, though, Fuente's program has been hurt by a rash of transfers. The Hokies were 6-7 in 2018, their first losing season since 1992, and 5-6 last season when they were among the teams hardest hit by the pandemic.

Virginia Tech's streak of 27 seasons playing in a bowl game also came to an end when the team voted not to participate in the postseason last year.

Fuente angered the Hokies faithful after his meeting with Baylor about its coaching opening last offseason became public. For much of this season, the Hokies' signature entrance to Metallica's “Enter Sandman” has been accompanied by boos when Fuente appeared on the field.

That dalliance, Babcock said, had “absolutely nothing to do with” Tuesday's announcement.

Fuente was not available Tuesday, saying goodbye in a message.

“We leave Blacksburg with many great memories, but above all else, our family cherishes the many relationships that have been established and that will always endure," Fuente said in a statement released by the school.

“To all of those players, coaches and staff who are still fighting on, know that the Fuente family is always cheering for you."