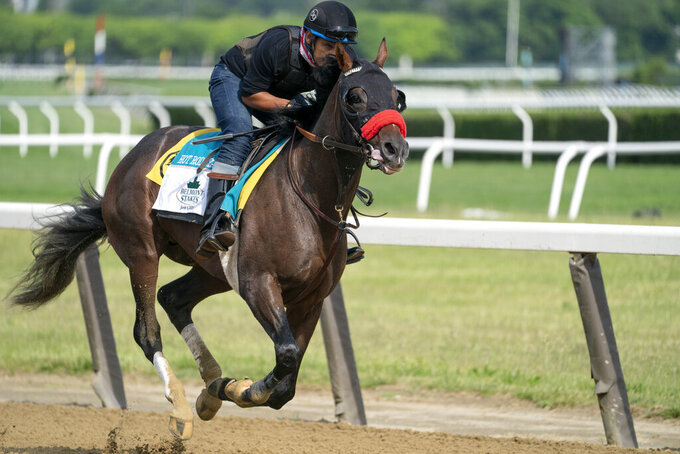 His death in August in a car crash stopped all that at age 16.

After his father, Stephen, fought through the first wave of grief, good friend and trainer Doug O'Neill called to offer any help he could for the family. Turns out it came in the form of 3-year-old colt Hot Rod Charlie, co-owned by nephew Patrick and now running in the Belmont Stakes in memory of Jake Panus.

“There aren’t really proper words to describe the gratitude that we have for Doug and Patrick, their selflessness in allowing my family and Jake’s story to kind of become part of Hot Rod Charlie’s journey on the Triple Crown this year,” Stephen Panus said Thursday. “It’s remarkable.”

O'Neill, himself with a son around Jake's age, couldn't believe what Panus was going through and the willingness to spearhead this cause through the pain.

“He's done it in a brave way because I’d be in a fetal position and not wanting to come out," O'Neill said.

Neither Doug nor Patrick O'Neill ever met Jake Panus but heard all about him from Stephen, a horse racing executive with The Jockey Club and America's Best Racing. They learned even more about him over the past few months, while Hot Rod Charlie was winning the Louisiana Derby and went into the Kentucky Derby as a top contender.

“Everyone around him was just drawn to him in a way that has that almost natural leadership,” Patrick O'Neill said. “That guy whenever he enters the room, it’s smiles, it’s laughs and he just has this aura to him. Talking to Stephen or talking to some of the people that run this foundation — it sounds like that’s kind of who Jake was.”

Hot Rod Charlie’s saddlecloth bears Jake’s initials and symbols of his life and goals, and his Triple Crown season is dedicated to raising awareness for scholarships in Jake’s name. One such symbol is a pendant Jake wore around his neck of a bear, which represents courage, confidence, healing and protection among some Native American tribes, and the other is the South Carolina Gamecocks logo to symbolize his desire to follow his father in playing football there.

Memorial scholarships were set up to help Oglala Sioux students from the Pine Ridge Reservation in South Dakota go to college and pay for a South Carolina walk-on football player who earns a scholarship. Over $100,000 has been raised for the Jake Panus Walk-on Football Endowed Scholarship since just before the Kentucky Derby, in which Hot Rod Charlie finished third.

“Him wanting to walk on to South Carolina’s football team: How do you not root for that?” Doug O'Neill said. “I just think it’s a great way to keep Jake alive with us and I hope to be a small part of it for a long time to come.”

The Belmont is the next step in that. Hot Rod Charlie — known as “Chuck” to Patrick O'Neill and his Boat Racing LLC co-owners — already brought 250 people together at the Kentucky Derby, and a victory in the third leg of the Triple Crown would only shine a brighter light on Jake Panus and his story.

“It would be emotional," Doug O'Neill said. "It’s heartbreaking. He was such a courageous kid, such a caring kid. I’m a very small part of trying to get the word out there to keep the legend of Jake Panus alive.”