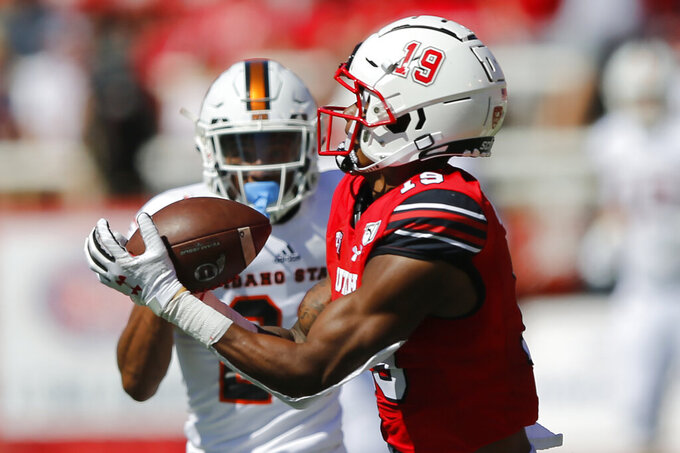 SALT LAKE CITY (AP) — Tyler Huntley and No. 11 Utah didn't use much of the playbook as the Utes romped through the nonconference season. They did put Pac-12 defenses on notice Saturday with a long passing game to compliment the ground-and-pound of Zack Moss.

In the first quarter of Utah's 31-0 victory over Idaho State, Huntley approached speedster Bryan Thompson on the sideline and said a call was coming that would allow him to shine.

"I told him he just needed to get on top of the DB and we'd make a play," said Huntley, who launched a career-long 82-yard touchdown throw to Thompson to make it 17-0 in the first quarter.

"Not much. (Offensive coordinator Andy) Ludwig has done a very good job of just keeping things really basic. We've just been running the first couple installs we did going into this year ... but if you can win with your basic stuff, that's really good for your offense," Moss said.

A vertical pass game is essential to keep defenses honest and the Utes may have found their deep threat in Thompson.

"It's been a long time coming, but it's nice showing everyone what I can do. But I'll leave the spotlight to those other guys," Thompson said as he walked off the field.

Huntley threw for 282 yards and three touchdowns, and Moss ran for 106 yards and another score.

"It's a good accomplishment, but there's so much more to come," Moss said. "We got off to a fast start and the plan was to just get me in and get me out."

His 1-yard scoring plunge later in the quarter moved him into the No. 2 spot by himself in career rushing touchdowns at 27. On just 10 carries, Moss also recorded his 13th 100-yard rushing performance with 10:05 still left in the second quarter.

"Finally, the coaches had been preaching it all week. They were dying and begging to have us get a good start, so it felt good. Hopefully, we can carry that forward," Moss said.

Huntley completed 15 of 19 passes before leaving in the third quarter as Utah moved to 3-0 for the fifth time in the last six seasons.

Through the first two games, Utah didn't throw many long passes, but Huntley aired it out on his third pass — an 82-yard TD strike to Bryan Thompson that traveled 55 yards in the air.

On Utah's next possession, Huntley connected on a 60-yard pass to Brant Kuithe for another score.

"I think it means a lot to Tyler and Zack, too. Teams can't just focus on the run if we can stretch the field," Thompson said.

Thompson, who has battled injuries in his career, had 105 yards receiving and two touchdowns as the Utes went deep a few times.

"What he did today is exactly what we need from him all season long. He's got a great skillset - he's big, 6-2, 205 pounds, he can run, he's got great hands," Utah coach Kyle Whittingham said. "It didn't surprise me. It was impressive."

The lone first-half highlight for the Bengals (1-1) was stopping the Utes on fourth down at the 1 when Huntley mishandled the snap on a sneak attempt.

"Your margin for error is minimal when you play one of these games and you can't give up big plays," lamented ISU coach Rob Phenicie. "But there was never a sense of panic in the whole game on the sideline. It's a tribute to these guys."

Utah was the only team in the FBS that had yet to commit a turnover or allow a sack this season until Britain Covey lost a fumble with 9:46 to play.

Idaho State only managed 116 yards in the game and the Utah defense was proud of the shutout.

"That's what you shoot for every game — zero points. If you don't score, you don't win," said linebacker Devin Lloyd, who had nine tackles including 3.5 for a loss.

The Utes have won all eight games they've played against the Bengals and the closest game was 24-0 in 1944.

The Utes scored on their first four possessions and drove to the 1 on their fifth drive while holding the Bengals to 57 yards in the first half while most starters were still in the game. Considering the FCS competition, the gaudy statistics and lopsided score may not be enough to move the Utes up or even hold steady.

Idaho State: The Bengals looked overmatched from the start and didn't cross mid-field until the second half. Idaho State played both Matt Struck and Gunnar Amos but neither had much time to throw and often missed their targets.

Utah: The offense showed a few new formations and plays and completed a few downfield passes to gain a comfortable lead that allowed them to sit Moss midway through the second quarter. Other than 11 penalties and a fourth-quarter lost fumble ("It got sloppy there toward the end," Whittingham said), the Utes achieved their goal of playing clean and getting a host of second- and third-team players some experience. The defense bolstered its suffocating reputation.

The Utes open Pac-12 play at No. 24 Southern California on Friday.