Hurricanes are reeling, and the honeymoon is over 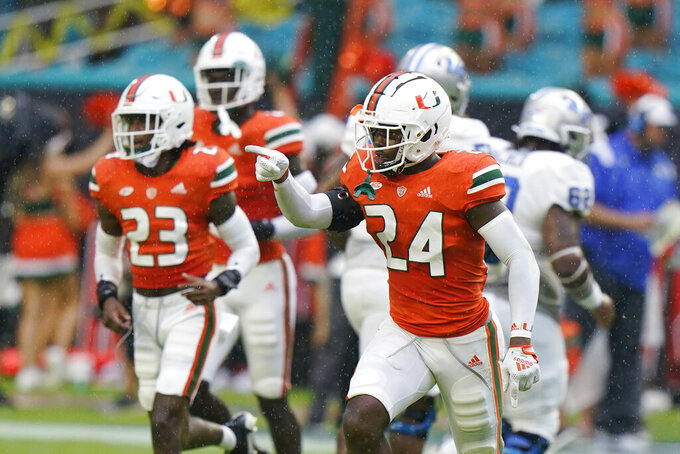 MIAMI GARDENS, Fla. (AP) — Miami is on a two-game losing streak, plus has some major injury problems, a disgruntled fan base and quite possibly a quarterback controversy.

The honeymoon for the Hurricanes is officially over.

Miami’s 45-31 loss to Middle Tennessee State on Saturday did more than knock the Hurricanes (2-2) out of the Top 25. It showed that the offense is continuing to sputter and the defense is suddenly susceptible to big plays. It also brought out more booing from those who showed up for the game — there weren’t many — and left everybody afterward reaching for answers.

“We’ve got a long ways to go,” Miami coach Mario Cristobal said. “I knew we had a long ways to go upon arrival, but the progress that we had made in some respects, I feel like certainly we’ve regressed. And we’ve got to do a better job.”

Cristobal was hired late last year, tasked with getting the Hurricanes back to a contending level the likes of which he enjoyed as a player while part of two of Miami’s five national championship teams.

He cautioned that the process would take time, and he wasn’t wrong. The Hurricanes are 2-2 for the third time in the last four years, and still have their entire Atlantic Coast Conference schedule awaiting.

“There's always going to be growing pains," said Buffalo Bills defensive end Greg Rousseau, a former Hurricanes standout. “Rome wasn't built in a day. I have all the belief in Mario Cristobal. He's the guy to turn the program around. But there's a culture that's embedded in the program from before and it might take years to completely break that up. They're headed in the right direction, as crazy as it sounds."

The preseason favorites to win the ACC's Coastal Division haven’t looked sharp in their last three games following an easy opening win over lower-division Bethune-Cookman. The Hurricanes started slowly against Southern Miss before winning 30-7, couldn’t find the end zone in a 17-9 loss at Texas A&M, then turned it over on their first three possessions on Saturday.

Tyler Van Dyke, the quarterback who was mentioned as a bit of a Heisman Trophy candidate and potential first-round pick in the 2023 NFL Draft going into the season, was 33 of 45 (73%) in his first two games. He’s 37 of 73 (51%) since, and got pulled on Saturday for backup Jake Garcia — who had better numbers against MTSU than Van Dyke managed.

Part of the problem there is injuries; top receiver Xavier Restrepo was hurt two weeks ago and isn’t expected back until the second half of the season, and there are now health issues among the running backs as well. Plus, Van Dyke’s top two targets from his breakout 2021 campaign — Charleston Rambo and Mike Harley — aren’t Hurricanes anymore, with Rambo electing to forgo his final year of eligibility and Harley graduating.

“We’ve got to do a better job setting him up for success and doing things offensively that allows us to have a more successful and a more productive pass game,” Cristobal said.

It’s not just the offense.

The 507 yards for Middle Tennessee were the most allowed by Miami to a non-conference opponent since giving up 554 to Louisville — then a member of the American — in the 2013 Russell Athletic Bowl. The 45 points by the Blue Raiders were the most by a non-conference foe since Kansas State put 52 up on Miami in 2012.

Here’s perhaps the most damning stat of all: In the most recent 91 Miami games before Saturday, the Hurricanes allowed five pass plays of 69 yards or more. MTSU hit on four such plays on Saturday alone.

“Extremely proud and happy for our players,” MTSU coach Rick Stockstill said. “It’s always fun to do stuff that nobody thinks you can do.”

His team left exuberant on Saturday, never having beaten a ranked team before. It’s new territory for the Blue Raiders.

For Miami, it’s more of the same. The Hurricanes are struggling, again. A bye week before ACC play starts on Oct. 8 against North Carolina gives them time to heal and keep working, but the season already seems to be hanging by a thread.

“The only expectation is for everyone to show up, for everyone to get better and do their best and work hard,” Cristobal said. “Obviously, what we have done is not good enough.”