Huskers open practice out to end streak of 4 losing seasons 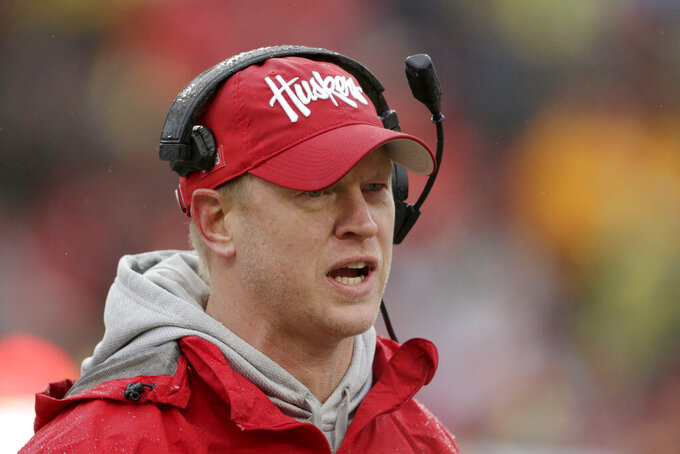 FILE - Nebraska head coach Scott Frost calls instructions during the first half of an NCAA college football game against Iowa in Lincoln, Neb., in this Friday, Nov. 29, 2019, file photo. Nebraska is 12-20 in three years under Frost. The Cornhuskers, who haven’t had a winning season since 2016, open Aug. 28 at Illinois.(AP Photo/Nati Harnik, File)

On the eve of the first preseason practice, the tone from Frost and his players was what would be expected from a team predicted to finish fifth again in its seven-team division.

“Get back to a brand of winning football,” center Cam Jurgens said Thursday, summarizing the goal. “I'm not going to put a number on it, but I think Husker fans will know if it’s a good product on the field."

Under Frost, the Huskers are 12-20 and yet to finish higher than fifth in the Big Ten West. They were 3-5 against a conference-only schedule in the pandemic-shortened 2020 season.

In 2017, when he was coming off the high of an unbeaten season at Central Florida, Frost said at his introductory news conference in Lincoln it was his intention to make the rest of the Big Ten adjust to him and his offense, not the other way around.

Frost's first three years have been a major disappointment, especially following the fanfare that came with the 1997 national championship-winning quarterback returning to turn around his alma mater. Now he has a new boss in athletic director Trev Alberts, the defensive great who played for Tom Osborne in the early 1990s.

Alberts has pledged to help Frost in any way possible, but this is unquestionably a pivotal year for a program that brings back a four-year starting quarterback and eight starters on defense.

Asked how he would define success, Frost said, “I’ve been asked that question 100 times. Day by day, we get better and better. We keep getting better inside the house, results are going to come.”

The Huskers, among eight FBS teams with 900 all-time wins, are mired in their worst stretch since six straight losing seasons from 1956-61. They haven't gone to a bowl since 2016 or won a conference title since 1999.

Transfer receiver Samori Toure, an FCS All-American at Montana, said he doesn't think his new teammates are beaten down by the losing. He said there's an air of positivity heading into fall camp.

“A lot of it is our team being accountable for the past,” Toure said. “Everyone knows we haven’t been as successful as in the past but everyone knows we’re on the right track. This year we have a different mindset. We know we have to be a lot better when it comes to game day.”

“I can say I love to win. I believe my teammates love to win,” Taylor-Britt said. “That mindset has switched over. You know, I don’t know what our mindset was before.”

Nebraska opens at Illinois on Aug. 28. The Illini have a new coach in Bret Bielema and return many of the players from the team that beat the Huskers 41-23 in Lincoln last year.

“I think it’s a huge game and it’s the most important game of the season because it’s our first game,” quarterback Adrian Martinez said. “It's a Big Ten West opponent, and guys are excited to be back playing sort of a regular looking season. I think it will be big for us in creating momentum and also setting a standard for how we want to play the rest of the season.”

NOTES: Frost sidestepped a question about how many of his players have received the COVID-19 vaccine. “I’m not comfortable yet with how many I perceive are vaccinated,” he said. “I think vaccinations are the best way for us to have an uninterrupted season, so we’re going to do our best to educate the guys and and try to improve.” ... LB Will Honas, the Huskers' second-leading tackler in 2020, probably won't be available this season because of an undisclosed spring injury. ... TE Thomas Fidone, one of the top players in the 2021 recruiting class, is expected to play late in the season after injuring a knee in the spring.