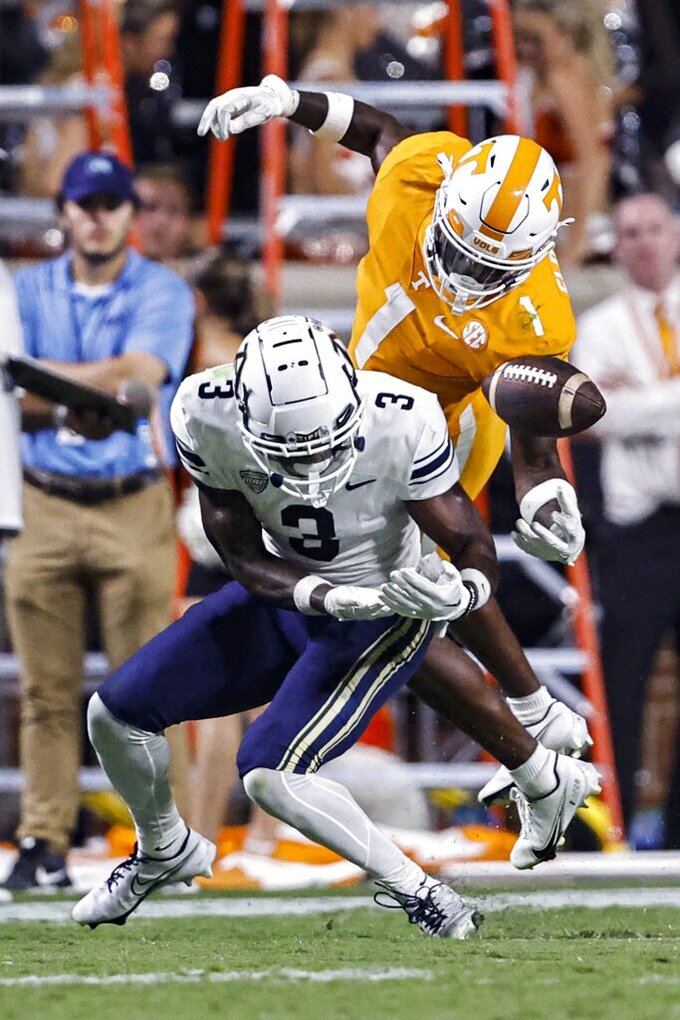 Hyatt caught five passes for 166 yards and two touchdowns to lead No. 15 Tennessee to a 63-6 victory over Akron.

“It was a great team game,” said Hyatt, who had scoring passes of 57 and 48 yards in the first half as the Volunteers (3-0) jumped to a 35-0 lead over the Zips (1-2). "We haven’t gotten to (Southeastern Conference) play yet. I’ll just keep my head down and keep working.”

Tennessee coach Josh Heupel said Hyatt worked in the offseason to reach his goals, adding, “I trust him. He understands what we're doing. I'm proud of the way he played tonight.”

Tennessee quarterback Hendon Hooker threw for 251 yards and two scores in the first 30 minutes and finished with 298 yards. Hooker extended his streak of games with a TD pass to 15, three behind school leader Heath Shuler.

In an effort to focus on the run game, the Vols had 165 first-half rushing yards before substituting freely in the second half. Jaylin Wright led the way with 96 yards and two TDs.

“Our passing game created some really big plays,” Heupel said. “At the half, there was a lot of football left to be played. We had to start fast (in the third quarter).”

Akron coach Joe Moorhead summed up the night by saying: “We all knew they were all explosive.”

Akron's best chance for a TD in the first half came with second-and-goal on the 5 when Daniel George fumbled on an end around.

Two key Tennessee offensive players — running back Jabari Small (right arm) and receiver Cedric Tillman (left knee) — left the game in the first half with injuries. Freshman Dylan Sampson filled in for Small and scored twice. Heupel didn't think they would be significant injuries. ... Vols receiver Jimmy Calloway was ejected in the third quarter when he threw at least five punches at an Akron defender.

For the first time since Oklahoma in 2015, Tennessee sold out a nonconference game. The Vols will have two sellouts in a row when 101,915 will cram Neyland Stadium next Saturday for the Florida game.

Akron: Moorhead is convinced that the team can find positives in the lopsided losses the last two weeks (Michigan State and Tennessee), but they have to be ready to pick on someone their own size for a change.

Tennessee: The efficient victory gave the Vols an opportunity to work through some of the concerns from the win over Pitt before they tangle with Florida next week.

Akron: The Zips will play their third consecutive road game at Liberty next Saturday night before they start MAC play at home with Bowling Green on Oct. 1.

Tennessee: SEC rival Florida will come to Knoxville next Saturday for a showdown.