'Mini-offseason' over as No. 12 Tar Heels return against BC 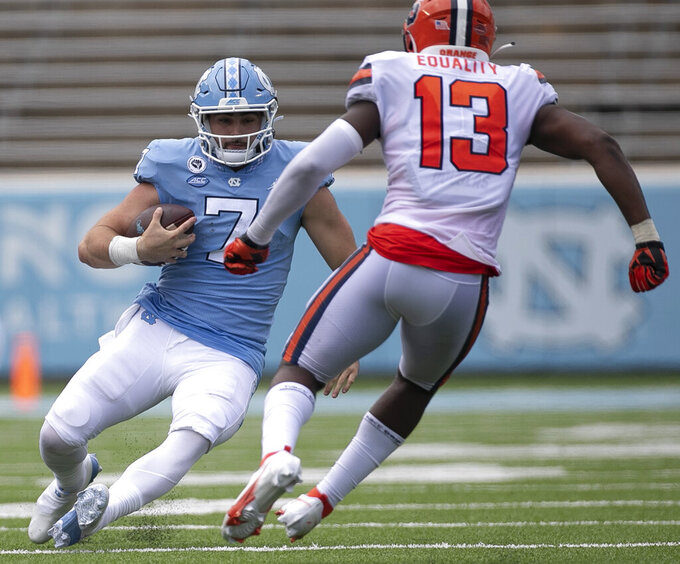 BOSTON (AP) — It’s been so long since No. 12 North Carolina played its last game that it almost feels like a new season to coach Mack Brown.

Three weeks after starting things off with a victory over Syracuse, the Tar Heels (1-0, 1-0 Atlantic Coast Conference) travel to Boston College (2-0, 1-0) to resume their pandemic-shuffled season Saturday. It’s the first time Carolina has had back-to-back open dates in the regular season since a campus polio outbreak in 1952.

“We’ve got to completely start over,” Brown said this week. “I’ve listened to some of our players and I’ve talked to them, and they said they think it’s been really good because we’re fresh.”

After beating Syracuse 31-6, the Tar Heels had their Sept. 19 game against Charlotte canceled because of coronavirus concerns two days before kickoff. Last weekend was an open date, but they couldn’t schedule a replacement in time.

“Just having two weeks off, it feels like we’ve had like a little mini-offseason,” Carolina receiver Beau Corrales said.

The Eagles fell behind Texas State 21-7 last week before quarterback Phil Jurkovec led them to 17 unanswered points and a 24-21 win — their first double-digit comeback since Matt Ryan rallied BC from a 10-0 deficit against Virginia Tech in 2007.

The Eagles had been a three-touchdown favorite against Texas State, a Sun Belt Conference school that was already playing in its fourth game of the season. BC coach Jeff Hafley said going against a team that’s been sitting for a while is a different kind of challenge.

“You only get the one game (of tape) from this past year, which always makes it harder,” he said. “The nice thing for them is they’ve had two weeks to prepare for us, they’re fresh and they kind of got guys back who’ve been injured and they’re probably excited to play, too.”

Brown is a member of the College Football Hall of Fame who has won nearly 250 games, including the 2005 national championship and a loss in the BCS title game four years later, but he has never faced Boston College in his 32-year career. Hafley, in his first year as a head coach, has two wins on his resume.

“It’s an honor for me to have the opportunity to go and coach against him," Hafley said. “He’s got to be one of the best college coaches of all time. ... I just have so much respect for him. He’s done an incredible job everywhere he’s been.”

Boston College is last in the ACC in rushing yards per game -- quite a come-down for a school known as O-Line U that blocked A.J. Dillon to three straight 1,000-yard season and led the conference in rushing last year. Hafley said not to blame the line, which has four starters returning but has had to shuffle around a little bit.

“We’ve got these great receivers and a great quarterback now,” center Alec Lindstrom said. "So as much as I would love to run the ball for 500 yards every game, like against Syracuse last year, Phil and the receivers have done a great job.

Hafley also noted that BC fell behind against Texas State and ran the ball only four times in the fourth quarter while trying to come back. In all, top back David Bailey ran just eight times for 33 yards.

“We had to play catch up and we had to start to throw the ball,” Hafley said. ”In the second half, he kind of disappeared a little bit. (It was) just the situation of the game: We needed to score extremely fast, and we needed to start throwing the ball."

UNC beat Mercer, North Carolina State and then Temple (in the Military Bowl) by a combined 152-30 margin to end last season and gave up just two field goals to Syracuse. The 36 points allowed in those four games are the program’s fewest since surrendering 34 points during the final three games of the 1999 season and the 2000 opener.

While much of the attention is on Carolina quarterback Sam Howell and the offense, the Tar Heels could use another defensive performance like their opener.

They allowed their lowest scoring and yardage (202) totals to an ACC opponent since the 2009 season in the 31-6 win against the Orange. They also had seven sacks, with five different players tallying at least one.

One thing to work on: They had three turnovers and nine penalties for 91 yards against Syracuse.