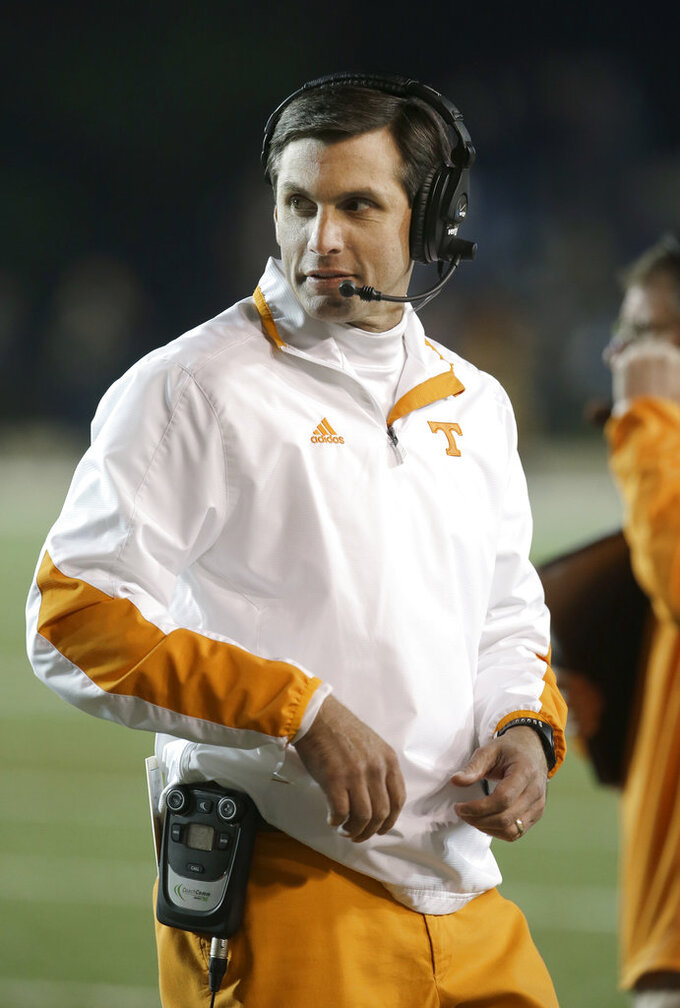 FILE - In this Nov. 17, 2012, file photo, Tennessee head coach Derek Dooley walks the sideline in an NCAA college football game against Vanderbilt in Nashville, Tenn. Dooley, now offensive coordinator at Missouri, says he has no hard feelings toward Tennessee as he prepares for his return to Knoxville. Missouri plays Tennessee on Saturday, Nov. 17, 2018.(AP Photo/Mark Humphrey, File)

KNOXVILLE, Tenn. (AP) — Missouri offensive coordinator Derek Dooley said he's grateful about the opportunity he had at Tennessee as the former Volunteers head coach prepares for his return to Knoxville.

Dooley went 15-21 at Tennessee from 2010-12 before getting fired amid his third straight losing season. After spending five years in the NFL as the Dallas Cowboys' wide receivers coach, Dooley came back to the college ranks this season as Missouri's offensive coordinator and quarterbacks coach.

"We didn't of course get the results we wanted when I was there, but that experience there — 32 months — made me a better coach and made me a better man," Dooley told reporters after practice Tuesday in Columbia, Missouri. "In some ways, you're always grateful for every experience you've got, and they gave me a great opportunity."

Dooley noted that much has changed since his Tennessee tenure. The coach who succeeded Dooley isn't there anymore. Neither is the athletic director who fired him.

Butch Jones replaced Dooley as Tennessee's coach and went 34-27 in five seasons before getting fired last November. Tennessee has since handed the job to Jeremy Pruitt , a former Alabama defensive coordinator.

Dave Hart dismissed Dooley but later stepped down as athletic director and was replaced in 2017 by John Currie , who lasted only eight months on the job before former coach Phillip Fulmer took over.

"It's been six years and two coaches, a couple of AD's, a president, so there's been a lot of change," Dooley said. "Nobody on the roster (remains), but I'll know some people there."

Tennessee went 6-7 and lost the Music City Bowl in Dooley's first season but failed to earn a bowl bid either of the next two years.

Dooley's tenure never really recovered after Tennessee ended the 2011 season with a 10-7 loss at Kentucky that ended the Vols' 26-game winning streak in that annual series. Dooley was fired the day after a 41-18 loss at Vanderbilt.

"Every place you go, you learn and you grow from," Dooley said. "There's not one place I don't go and look back and go, 'Gosh, I could have done a little better here and I could have done a little better there.' That's what experience is. I feel like I'm a lot better ... today than I was six years ago, and that's because of the experience I had in Knoxville."

Pruitt said this week that Dooley has done a "fantastic job" with Missouri's offense.

"I know that some of the guys I've worked with have a whole lot of respect for (Dooley), what kind of coach that he's been when they worked with him on the staff," Pruitt said. "I'm watching what they're doing offensively and they're doing a really good job."

No matter how much Dooley has tried to downplay his return to Tennessee, Missouri's players suspect this game is particularly important to him.

"I think if you're a really good coach, you don't necessarily show whether or not one game means more to you than other ones," Missouri quarterback Drew Lock said. "It probably means a little bit to him, but he's not going to show that to us. He'll probably express how he felt during the week after the game is over."

This will mark the second time this season that Tennessee has faced off with one of its former coaches. Jones is now an offensive analyst at Alabama, which trounced Tennessee 58-21 at Neyland Stadium last month.

Some Tennessee fans got angry after that game when photos circulating on social media showed Jones smoking a cigar , a postgame tradition for the winner of the annual Alabama-Tennessee game. Alabama players also doused Jones with a bucket of water on the field to celebrate the Crimson Tide's victory.