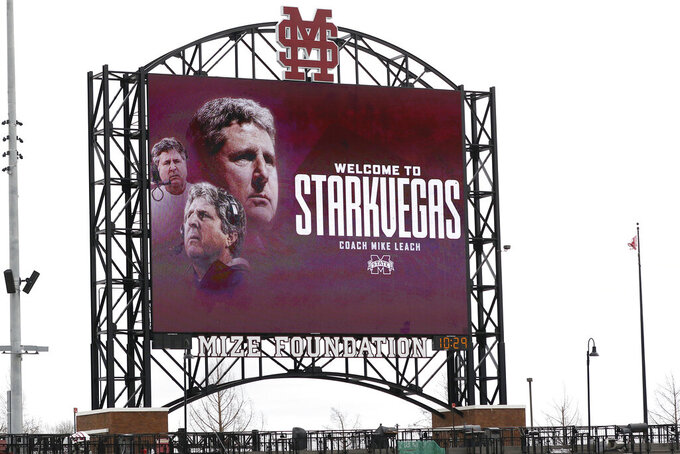 Instead, both coaches — and their respective offenses — will encounter stiffer challenges in their Magnolia State debuts. Leach and the Bulldogs visit defending national champion and sixth-ranked LSU on Saturday, a challenge for his pass-happy Air Raid scheme.

Leach, whose team is a 17-point underdog in the Southeastern Conference matchup, doesn’t mind the challenge especially after an offseason of uncertainty because of COVID-19.

“We’re all excited about that,” said Leach, who was hired in January after going 55-47 in eight seasons at Washington State. “I think it’s gone for me like it has kind of for everybody in the SEC. We’re even more excited because, you know, the distractions and so working through that.

“When we hit the field, (we) just try to embrace all that," the coach added. “I do think there’s been a lot of enthusiasm because I think that on our teams’ part there’s a certain amount of relief when they get out there and they get to play because it feels normal, it feels structured and it’s a period of time where it’s not distracted.”

Before Deion Sanders made a prime-time splash when he was hired by Jackson State on Monday; Leach and Kiffin were splashy hires in the state. Kiffin and Leach inherited programs trying to make headway in a division regarded as the toughest in college football, the SEC West.

And both have track records built on innovative offense and play calling.

But they faced added challenges as new coaches who didn’t have spring practice to start implementing their systems and getting first-hand looks at their new players because of COVID-19.

They finally get to lead their teams onto the field a few weeks later than initially expected, to start 10-game schedules of all league games.

Kiffin doesn’t expect to be exactly overwhelmed by emotion.

“I don’t think I’m a real emotional guy on things, so I don’t think it will be any different for me,” he said. The former head coach at Tennessee, USC and most recently Florida Atlantic resurrected his coaching fortunes in the SEC West as Alabama’s offensive coordinator.

The Rebels have won a combined three SEC games the past two seasons under Matt Luke, going 5-7 and 4-8 overall.

Quarterbacks John Rhys Plumlee and Matt Corral are once again vying for the starting job, and Kiffin hasn't tipped his hand publicly if he's made a decision.

The Rebels do figure to have more offensive balance after ranking 102nd nationally in passing and ninth in rushing.

“I think everybody’s real excited about it, to get a little bit more variety in this offense,” Plumlee said during preseason practices. “I felt like last year sometimes we could be one-dimensional, but I think this upcoming year we’re going to turn some heads for sure.”

Leach turns to fifth-year senior K.J. Costello, a former Stanford starter who passed for 6,151 yards and 49 touchdowns in three seasons. He also has a prolific runner in Kylin Hill for a team coming off a 6-7 season.

Leach believes his high-octane offense is built for the all-SEC schedule. His only concern is how his team weathers the initial growing pains with a faster pace.

“I think there’s been less trial and error,” the coach said. “We’ve really got to hone it down and try to feature what we’re best at to put personnel in the best position we can. I was inclined that way anyway, but there’s less margin of error on it.”

Both teams figure to have scant margin for error in the coaches' debut games.

___ AP Sports Writer Gary B. Graves contributed to this report.