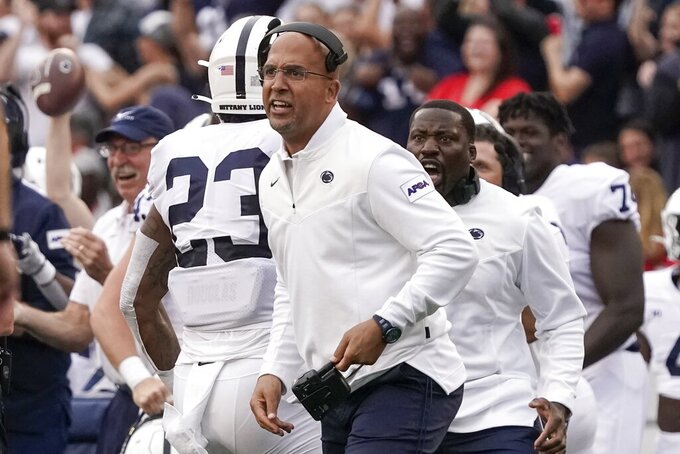 STATE COLLEGE, Pa. (AP) — Weeks like this are why Penn State coach James Franklin tries to keep his messaging focused on the opponent at hand.

If he talks about a weeks-away SEC foe or a looming Big Ten road trip, it may appear that Franklin is overlooking Penn State’s more immediate challenge. In Saturday’s case, that's reigning MAC champion Ball State.

“I do believe in trap games if you’re sending mixed messages,” Franklin said. “I believe in teams playing inconsistent because they either look forward, look back, get caught up in praise, get caught up in criticism, don’t have the correct amount of respect for the opponent or the process."

The matchup for the No. 11 Nittany Lions (1-0, 1-0 Big Ten) against the senior-filled Cardinals (1-0) has gotten hype all week inside Penn State’s practice facility.

Ball State will bring 20 returning starters riding an eight-game winning streak, with two against Top 25 teams, to Beaver Stadium. The capacity 106,000-plus venue is expected to be packed for the first time since COVID-19 forced fans to watch last season from home.

Cardinals coach Mike Neu said he made practices “as obnoxious as possible” this week with music and artificial crowd noise. Many of his players, especially those who were around for the team’s 24-16 loss at Notre Dame in 2018, are looking forward to returning to a big, storied venue.

Ball State has 16 fifth-year seniors listed on its roster.

“That was a program as well that had a very storied past and tremendous history, so very similar,” Neu said. “We just got to make sure we don’t give them a bunch of reasons to be really loud.”

Penn State running back Noah Cain waited a long time to make his return from a leg injury that ended his 2020 season. When he did so last week, he got just eight carries.

Cain said he has developed more patience as a result of his injury. But he wants to do more to help the Nittany Lion's offense get going. Penn State opened the season with five punts and a turnover on downs. Cain, who averaged six yards per carry, scored the go-ahead touchdown in the fourth quarter.

“The younger me would’ve kind of been more frustrated not having more carries in the first half, and let that get in my head,” Cain said. “That would affect me handling my business in other areas of the field.”

Jesse Luketa was all over the field last week. He played defensive end for the Nittany Lions before switching back to middle linebacker after starter Ellis Brooks was ejected for targeting in the second half.

Luketa, who is naturally a linebacker, will likely be needed at his old spot again as Brooks will have to sit out the first half by rule.

Ball State quarterback Drew Plitt enters the game among the top 15 nationally in career passing yardage and touchdowns, with 6,698 and 52, respectively. He and senior wideout Justin Hall have developed a nice connection over the years.

Hall has caught at least one pass in each of the 44 games he has played and leads all FBS players with 265 career receptions.

Penn State has alternated between Jordan Stout and Jake Pinegar over the last two seasons, usually with Stout handling longer kicks and kickoff duties. He punted and kicked against Wisconsin and earned Big Ten weekly honors for his 53.9 yard average on seven punts.

Stout, the team’s preferred kickoff man for his strong leg, made a 24-yard field goal but missed one from 23. He also missed an extra point. Franklin didn’t sound ready to pull the plug on Stout handling place-kicking, punting and kickoff duties.

“We won’t make that determination off one game,” Franklin said.