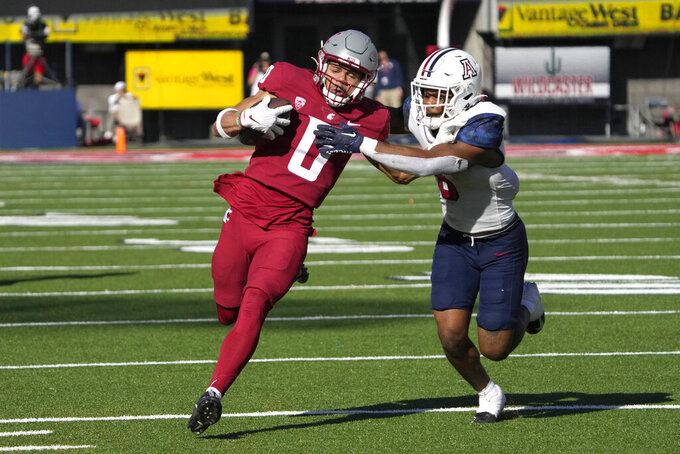 Washington State defensive back Sam Lockett III (0) gets tackled by Arizona running back Michael Wiley after making an interception in the second half during an NCAA college football game, Saturday, Nov. 19, 2022, in Tucson, Ariz. (AP Photo/Rick Scuteri)

Washington will know by the time the Apple Cup kicks off whether it got the help from the rest of the conference needed to have a shot at playing in the Pac-12 championship game opposite Southern California. The Huskies have a chance at a 10-win season in Kalen DeBoer’s first year in charge and likely secure a top-tier bowl berth with a win. The Cougars snapped a seven-game losing streak to the Huskies in blowout fashion last season in Seattle. But the Cougars have not beaten the Huskies in Pullman since 2012 and haven’t won consecutive Apple Cups since 2007-08.

Washington’s pass game vs. Washington State’s secondary. Can the Cougars hold up in the passing game against Michael Penix Jr. and the top passing offense in the country? That’s the big question for Washington State. The Cougars have allowed just one 300-yard passer since Week 4 and just two all season. The Cougars made up for allowing 357 yards passing last week to Arizona by coming up with four interceptions. Penix played limited minutes in last week’s blowout win over Colorado and the Huskies had under 300 yards passing for only the second time this season.

Washington: WR Rome Odunze. It’s been a breakout season for the sophomore which has raised the possibility of Odunze becoming an early entry to the NFL draft and making Saturday potentially his last regular season game for Washington. Odunze has five 100-yard receiving games this season and needs 69 yards to reach 1,000 for the season.

Washington State: RB Nakia Watson. The Cougars have simply been a different offense since Watson returned after missing nearly a month with injury. Watson had 166 yards rushing against Stanford and 116 against Arizona State, and while he had only 56 yards on the ground last week against Arizona, he scored two touchdowns — one rushing and one receiving. Washington’s run defense has been an issue at times, including 318 yards allowed to Oregon and 175 to Oregon State.