No. 17 TCU heads to No. 19 Kansas for showdown of unbeatens 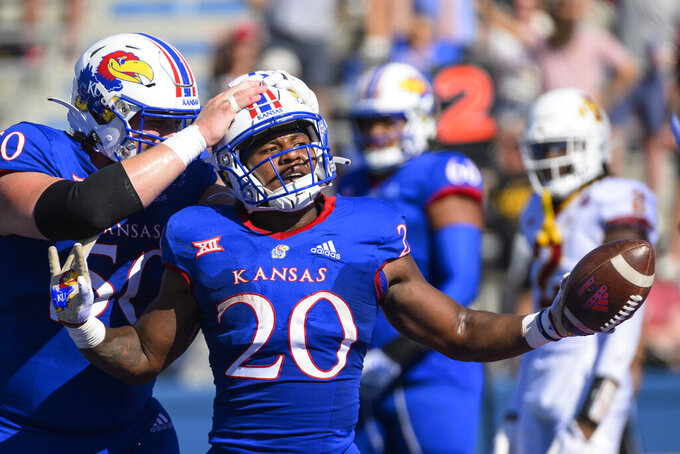 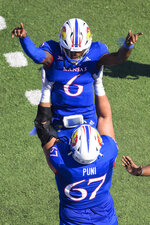 Line: TCU by 7, according to FanDuel Sportsbook.

TCU and Kansas will be playing to stay atop the Big 12 when they meet Saturday at Memorial Stadium. Who would have thought that would be the case before the season? The Jayhawks are 5-0 for the first time since 2009, when they went on to lose their last seven games, while the Horned Frogs are coming off a blowout of Oklahoma. The last time Kansas won its first six was 2007, when it went 12-1 and won the Orange Bowl. The Horned Frogs have not won their first five since 2017, when they started 7-0 before finishing 11-3 with a win in the Alamo Bowl.

TCU quarterback Max Duggan against Kansas counterpart Jalon Daniels. Sure, the two won't match up in the literal sense, but the team that wins will probably be the one that gets better quarterback play. Duggan leads the nation in pass efficiency and is third in completion percentage at 74.5, and he's thrown 11 touchdown passes without an interception. Daniels has thrown for 983 yards with 11 touchdowns and one pick while rushing for a team-best 335 yards and five more scores.

TCU: RB Kendre Miller leads active Power 5 players at 7.43 yards per carry for his career, and he did nothing to hurt those numbers against Oklahoma. Miller carried 13 times for 136 yards with TD runs of 15 and 69 yards in the 55-24 romp. Kansas limited Iowa State to 26 yards on the ground last week.

TCU has won nine of 10 games against Kansas as members of the Big 12. The Horned Frogs won 31-28 on a 25-yard field goal in the closing seconds last season. ... The last time the Horned Frogs were 4-0, current coach Sonny Dykes was on staff as an offensive analyst. Dykes is the first TCU coach to win his opening four games since Francis Schmidt in 1929. ... TCU has not trailed since the first 24 seconds of the second quarter of its opener against Colorado. ... The Horned Frogs are second nationally in scoring (48.5 points per game) and total offense (549.5 yards per game). ... TCU had four TDs of at least 62 yards in its win over Oklahoma. ... Kansas has not beaten a ranked team since No. 15 Georgia Tech in 2010. It has not beaten a ranked conference opponent since No. 12 Missouri in 2008. ... The Jayhawks have not beaten a ranked opponent at home while also ranked since Nov. 24, 1973 (No. 19 Missouri 14-13). ... The Jayhawks have allowed two sacks this season. ... Kansas tops the Big 12 in red zone defense.