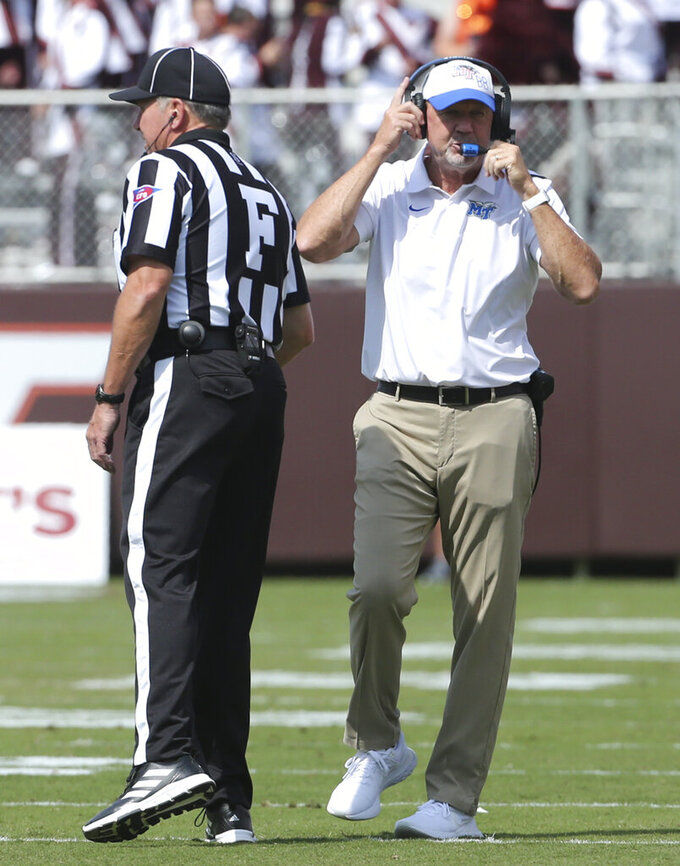 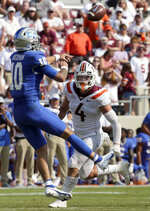 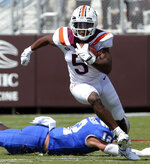 BLACKSBURG, Va. (AP) — Raheem Blackshear rushed for two touchdowns to lead No. 19 Virginia Tech to a 35-14 victory over Middle Tennessee on Saturday after a slow start.

The Hokies (2-0, 2-0 ACC) scored on their first three possessions of the second half, including back-to-back TDs by Blackshear, in a game they led 14-7 at halftime.

Virginia Tech broke open the game when Jalen Holston scored on a 29-yard, third-quarter run to take a 21-7 lead. Blackshear, who rushed for 58 yards, then scored on runs of 6 yards and 1 yard on ensuing possessions to help the Hokies build a 35-7 cushion.

“At halftime, it was obviously a tight ball game. I didn’t feel like we were shocked it was close,” Virginia Tech coach Justin Fuente said. “I don’t know that we’re the team that can just blow the doors off people. That’s just not how we’re built right now.

“I didn’t sense any panic or shock. That’s what happens with teams that are overconfident or arrogant. They’re shocked that the other team wants to play. We knew what we were getting into, so there was no shock, no panic. Those guys were ready to go back out there and play.”

Braxton Burmeister went 14 of 24 for 142 yards and a score for Virginia Tech, which finished with 375 yards.

“I’m really proud of our team,” Middle Tennessee coach Rick Stockstill said. “We’ve got a really good football team. I’m disappointed we lost, but we fought our guts out. We get better at a few things and and we’ve got a chance to have a good team.”

Middle Tennessee: The Blue Raiders kept the game close until Hockman threw a third-quarter interception that led to Blackshear’s 6-yard score to give the Hokies a 28-7 lead. Middle Tennessee, which fell to 0-21 versus ranked foes, now gears up for Conference USA play, which starts next Saturday.

Virginia Tech: The Hokies avoided a letdown after an upset of then-No. 10 North Carolina in their season opener, using a balanced attack and good defense in a methodical win over the Blue Raiders. Virginia Tech will receive a much stiffer test next weekend with a road game at rival West Virginia — its first road test of the season. The Hokies and Mountaineers have faced each other just once in the past 16 seasons.

At worst, the Hokies will remain in their current spot, but they could move up pending action in Saturday’s later games.

Virginia Tech’s coaching staff has been encouraging Burmeister to slide or get out of bounds more to avoid hits, and it breathed a sigh of relief after Burmeister returned to the game following a big hit from Middle Tennessee safety Gregory Grate Jr. in the first quarter.

The Hokies need Burmeister, who missed seven plays before returning, to remain healthy. Their backup, Knox Kadum, had played in just one game in his career before seeing action against Middle Tennessee.

“I’m not used to sliding,” Burmeister said. “I haven’t really thought about sliding until this year. It’s definitely a work in progress, and there are definitely some situations where I can be more aware and get down earlier, but also get as many yards as I can.”

Middle Tennessee: The Blue Raiders play at UTSA on Saturday.

Virginia Tech: The Hokies play at West Virginia on Saturday.