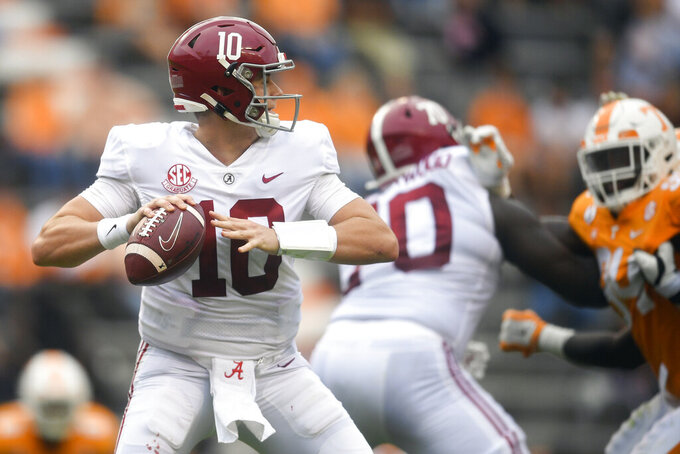 Mississippi State is trying to add another bright spot to a season that has gone downhill since an opening win over LSU that now looks less impressive. Alabama is trying to sustain the momentum heading into an open date. The Crimson Tide is also adjusting to life without injured star wide receiver Jaylen Waddle.

It's Alabama and the SEC's top pass offense against the league's No. 1 pass defense. The Bulldogs are allowing just 192.3 yards per game through the air. Quarterback Mac Jones and the Tide rank third nationally with an average of 397.8 yards a game and still have plenty of weapons.

Mississippi St.: QBs K.J. Costello and Will Rogers opened the week “neck and neck" for the starting job, according to coach Mike Leach. Both have thrown more interceptions than touchdowns. Rogers, though, was 15-of-18 passing against Texas A&M and, unlike Costello, didn't throw a pick. The Bulldogs are averaging 358 passing yards per game but rank last in the league and 98th overall in turnover margin.

Alabama: WR Slade Bolden is set to replace Waddle likely as a starter on offense and as the punt return man. He doesn't have to put up huge numbers with DeVonta Smith and John Metchie III, but it's a chance for him to carve a role in the offense. Freshman Javon Baker is among those who also could see bigger roles.

Alabama has won the last 12 meetings since Nick Saban's first year in 2007. Mississippi State hasn't won in Tuscaloosa since 2006. ... The Tide puts its FBS-record 94-game winning streak against unranked teams on the line. ... Leach's Texas Tech team lost to Alabama 13-10 in the Cotton Bowl in January 2006. ... Rogers set a Mississippi State record for completion percentage (83.3) against the Aggies with a minimum of 15 attempts. ... Leach says tailback Kylin Hill remains unavailable and is apparently opting out the rest of the season to prepare for the NFL draft. He hasn't been used much as a runner but did have 23 catches.