No. 2 Georgia gets tough test at No. 13 LSU in SEC matchup 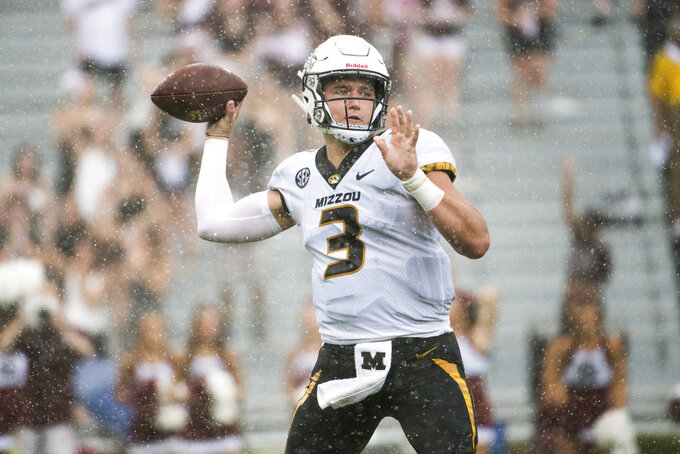 Here are a few things to watch in Week 7 of the Southeastern Conference football season:

No. 2 Georgia at No. 13 LSU: Georgia might be in for its toughest game so far this season when it travels to face LSU in Death Valley. The Bulldogs have coasted the past few weeks with big wins over Tennessee and Vanderbilt , but LSU's defense should provide a tougher challenge. The Tigers are trying to bounce back from last week's loss to Florida and need to get more consistency on offense.

Missouri's offensive line vs. Alabama's defense. Missouri's a 28-point underdog on the road against the top-ranked Tide. The only way the Tigers have a chance is if their veteran offensive line can give Drew Lock time to find his receivers and complete some big plays. Alabama's defense looked slightly shaky last week when giving up 31 points to Arkansas, but has otherwise had a very good season.

Six of the nation's top 12 teams in scoring defense are from the SEC. Mississippi State (12.7) is first, Georgia (13.0) is second, Kentucky (13.8) fifth, Auburn (14.3) sixth, Florida (14.8) eighth and Alabama (16.0) 12th. ... Alabama is outscoring teams by 40 points per game. ... Tennessee has lost its last 15 games against SEC West teams and hasn't beaten a team from the West since a 52-14 triumph over Mississippi in 2010. The Vols face back-to-back West opponents when they visit No. 21 Auburn on Saturday and host No. 1 Alabama on Oct. 20. ... Florida has three players with at least 6 ½ tackles for loss: Vosean Joseph (6 ½), Jachai Polite (7 ½) and Jabari Zuniga (7 ½). East Carolina, No. 16 Miami and Oklahoma State are the only other Football Bowl Subdivision teams to have three players with at least 6 ½ tackles for loss. Florida also has Chauncey Gardner, who has collected six tackles for loss. ... No. 13 LSU has won 20 straight October home games. LSU hasn't lost an October game at Tiger Stadium since falling to No. 1 Florida in 2009. ... Mississippi gained a school-record 826 yards of total offense Saturday in a 70-21 victory over Louisiana-Monroe. That's the largest single-game output by any FBS team this year.

LSU is a 7 ½-point underdog at home against No. 2 Georgia, which is undefeated but arguably hasn't looked quite as impressive as it did last year. LSU already has beaten Miami at a neutral site and has split road contests with Auburn and No. 14 Florida, so the Tigers should savor the opportunity to play a ranked team at home.

South Carolina QB Jake Bentley is expected to play this week against Texas A&M and should have plenty of incentive. When an injured left knee prevented Bentley from playing last week, Michael Scarnecchia filled in and threw three touchdown passes as the Gamecocks rallied to beat Missouri 37-35 . Bentley has been South Carolina's starting quarterback since the second half of the 2016 season but hasn't played particularly well this year. If Bentley struggles, South Carolina might not hesitate to see if Scarnecchia can build on what he did last week.