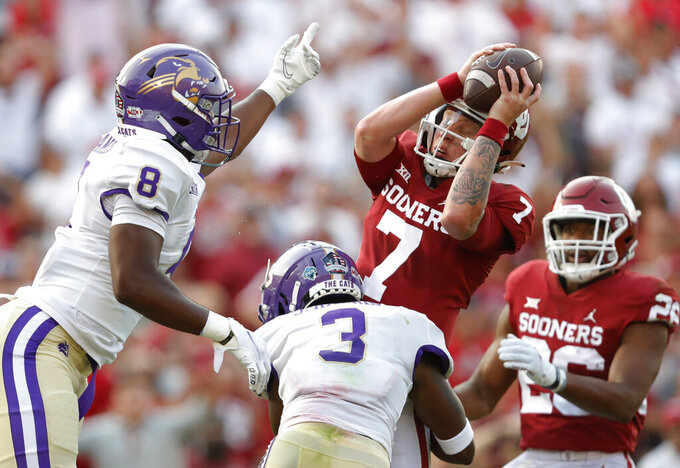 Line: Oklahoma by 22 1/2, according to FanDuel Sportsbook.

Pride always is on the line when these two old rivals meet. Oklahoma wants to extend its 10-game win streak. The Sooners likely can’t afford a loss and remain in the national title hunt. They want to keep building momentum after rolling past Western Carolina 76-0 last Saturday. A Nebraska win could take pressure off coach Scott Frost, who has struggled since taking over before the 2018 season.

Nebraska QB Adrian Martinez vs. Oklahoma's defensive line. Martinez has rushed for 256 yards in three games and is capable of creating passing opportunities with his legs. Oklahoma is talented up front, but the Sooners had some trouble with Tulane quarterback Michael Pratt, who also has good mobility.

Nebraska: WR Samori Toure. He has 308 yards receiving already this season -- second nationally -- and he had two 68-yard touchdown receptions last week against Buffalo. The transfer from Montana has gone over 100 yards in each of the past two games.

Oklahoma: QB Spencer Rattler. He bounced back from a subpar opener against Tulane to throw five touchdown passes in the first half against Western Carolina last Saturday. He likes big stages, and he has one this week.