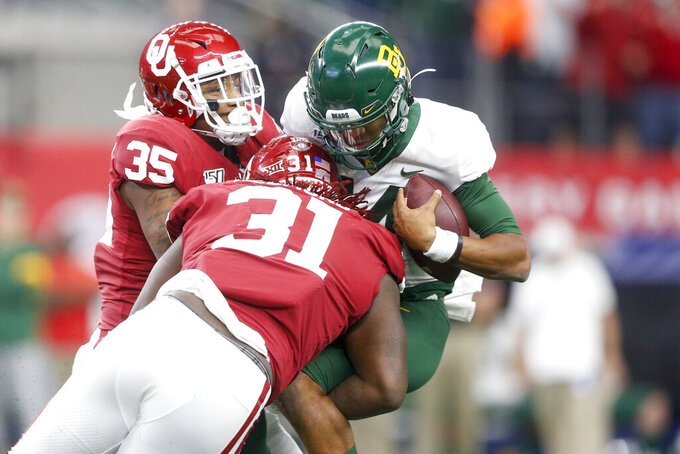 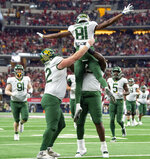 ARLINGTON, Texas (AP) — No. 6 Oklahoma has done all it can, winning a fifth Big 12 title in a row with another close win over No. 8 Baylor.

Now the Sooners wait to see if they are going to get in back in the College Football Playoff. That is up to the selection committee, though it will be virtually impossible to keep Oklahoma from being one of those four teams.

“I hope they see the Big 12 champions. They’ve got a job to do, I get that," coach Lincoln Riley said after Oklahoma's 30-23 overtime win Saturday.

A day after No. 5 Utah lost in the Pac-12 championship game, and before No. 4 Georgia fell 37-10 to No. 1 LSU in the SEC title game, Oklahoma (12-1, No. 6 CFP) became the first team in any league to win 10 conference championship games. It was the 13th Big 12 title overall for the Sooners, who went to the playoff three of the past four seasons.

It was the second time in four games that Oklahoma beat the Bears (11-2, No. 7 CFP), who in coach Matt Rhule’s debut season two years ago lost 11 games with a depleted roster in the aftermath of a scandal that led to the firing of two-time Big 12 champion coach Art Briles.

Rhule said Oklahoma should be in the playoff regardless of any other results.

As for his team, Rhule told them to “feel that pain" of watching the Sooners celebrate.

“Let that drive you in the offseason," he said. “But at the same time, also understand what we've done."

There was an 81-yard catch-and-run touchdown by Trestan Ebner with 9:41 left in regulation and a 78-yarder to Chris Platt that set up John Mayers’ 27-yarder with 3:25 left to make it 23-all.

After Oklahoma scored on three plays to start overtime, the Sooners put the heat on Zeno. He was sacked for a 10-yard loss, and then he was under duress again when he flung a game-ending pass that fell to the turf harmlessly.

The Bears had only 105 total yards before the 81-yard TD pass in the fourth quarter by Zeno, who had played in only one game and was the scout team quarterback imitating Hurts in practice this week. They finished with 265.

Hurts, who last year led Alabama’s comeback win over Georgia in the SEC title game, was 17-of-24 passing for 278 yards and a touchdown. CeeDee Lamb had eight catches for 173 yards after missing the previous game against the Bears.

Brewer was taken out of the game not long after bulling over a defender at the end of a 7-yard run early in the second quarter. He finished that series and played one more, apparently hitting his head on the ground when being sacked by Kenneth Murray, before Gerry Bohanon took over.

Referee Mike Defee went to the sideline and asked Rhule to get Brewer checked out, because the ref said the quarterback “just seems a little bit out of it.”

Bohanon directed Baylor on scoring drives on its last two possessions before halftime. He threw a 33-yard touchdown to Tyquan Thornton before a 28-yard field goal by Mayers put the Bears up 13-10 at halftime — even with only 98 total yards.

Three weeks after their biggest comeback ever, a 34-31 win at Baylor after a 25-point deficit, the Sooners jumped ahead 10-0 on the Bears.

Lamb turned a short catch into a 71-yard gain to the 7 on Oklahoma’s second drive, setting up Kennedy Brooks’ 6-yard TD run. On the next drive, Lamb’s 26-yard catch came before Gabe Brkic kicked the first of his three field goals — he has made a school-record 17 in a row this season without a miss.

Oklahoma: The Sooners are 10-1 in Big 12 championship games. They became the first Power Five team since Alabama from 1971-75 to win five consecutive outright conference titles. (Clemson had the chance to match that in the ACC on Saturday night). The 36-year-old Riley is 36-5 as head coach, with Big 12 titles in all three seasons since being promoted from offensive coordinator after Bob Stoops suddenly retired in the summer after winning his 10th Big 12 championship. Oklahoma has a 27-3 series advantage over the Bears, though this was the first game between them with both ranked in the Top 10.

Baylor: The 11 wins matched a school record, and Baylor still has a chance to break that in their bowl game. Rhule said while his Bears are disappointed with the loss, he knows they will be ready for their bowl.

Baylor would go to the Sugar Bowl against an SEC team if the Sooners make the playoff, and could still be in a New Year’s Six game if they don’t.