No. 9 Notre Dame has stacked deck of youthful linebackers 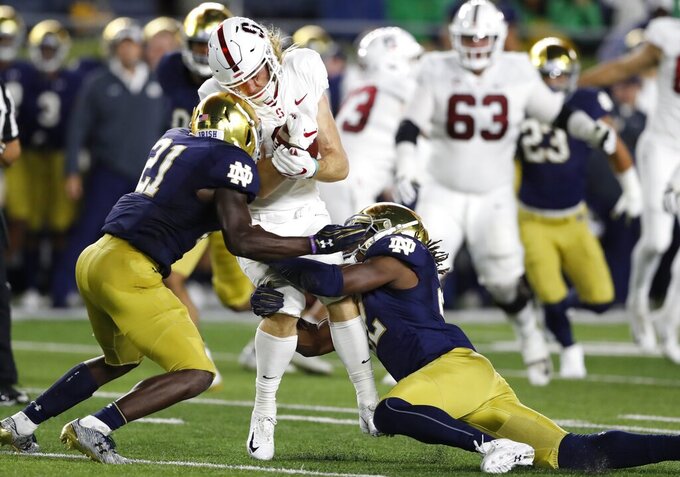 SOUTH BEND, Ind. (AP) — For a guy who generally holds his cards close to the vest, Clark Lea may have a couple aces up his sleeve.

The defensive coordinator and linebackers coach for No. 9 Notre Dame said he sees leaders everywhere on his side of the ball with the season opener at Louisville coming up on Monday.

In the secondary, free safety Alohi Gilman and strong safety Jalen Elliott are both team captains and the Fighting Irish are counting on senior Troy Pride Jr. to replace All-American Julian Love at boundary corner. On the defensive line, senior ends Julian Okwara and Khalid Kareem also were named captains by their teammates. Junior Myron Tagovailoa-Amosa has replaced the graduated Jerry Tillery and junior Kurt Hinish has stepped up at nose tackle.

"The thing I'm excited about is we have a talented group," Lea said. "Everyone has the ability to have a role in the game. We're not having two guys take the brunt of snaps this season. We have rotations, we have specific skills that are executed in situations."

Asmar Bilal, a 6-2, 227-pound grad student who saw the majority of snaps at rover last fall and finished with 50 tackles, has spent time at both Coney's middle and Tranquill's weakside linebacker positions. Drew White, a 6-foot, 230-pound physical junior who saw limited action in four games, has returned from shoulder surgery and is part of the rotation in the middle. Jeremiah Owusu-Koramoah, a 6-1, 216-pound junior, has been impressive in Bilal's old rover spot.

"(White's) got a really, really nice knack of finding the ball," added Lea, who likely will remove the once overlooked former three-time state champion at St. Thomas Aquinas (Florida) in passing situations. "He's a winner who has fought through adversity and hasn't wavered or backed down."

Coach Brian Kelly said he realizes that how well this young group grows will determine how far the Irish will go in 2019.

"We've got a better feel on who (the players) are and what their strengths and weaknesses are," Kelly said. "We'll use different packages and you'll see different faces. For this team, it's going to be about the basic tenets of football — we're going to have to run the ball well and stop the run. We're going to have to play with a physicality."