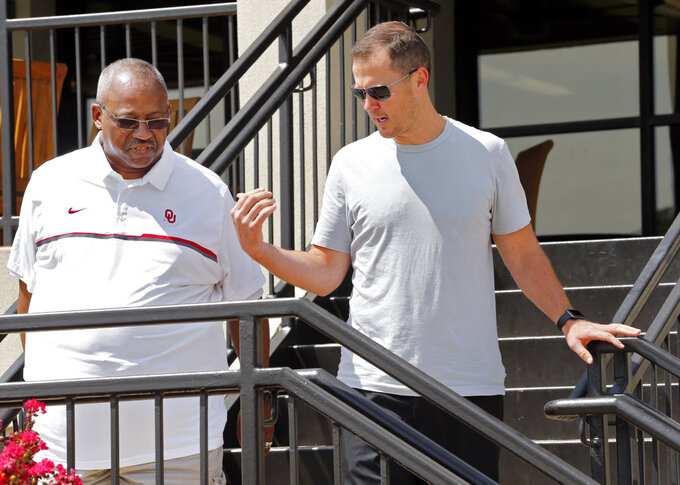 In this July 26, 2017 photo University of Oklahoma head football coach Lincoln Riley, right, and assistant football coach Ruffin McNeill walk to a golf event at Jimmy Austin Golf Course in Norman, Okla. Oklahoma fired defensive coordinator Mike Stoops on Monday, Oct. 8, 2018 after the Sooners struggled to stop Texas during their first loss of the season. McNeill will be the defensive coordinator for the rest of the season. (Steve Sisney/The Oklahoman via AP)

The ninth-ranked Sooners want to change course after a 48-45 loss to Texas and the drama that followed when coach Lincoln Riley fired defensive coordinator Mike Stoops . After having a weekend off, Oklahoma is ready to get back on the field Saturday against TCU.

The defense will be under the microscope after making Ruffin McNeill interim defensive coordinator . The Sooners rank 76th out of 129 schools nationally in points allowed per game and 97th in total defense. Riley said everyone associated with that side is accepting responsibility for the issues.

"Everybody has to look in the mirror,'" he said. "Everybody has to step up. It's not just the two guys who are team captains or the other three or four who are recognized as team leaders. Everybody's got to be willing to look at it and say 'what can I do better.' I saw the start of that and that needs to continue."

The Sooners have been adjusting to McNeill, who had been defensive tackles coach for the Sooners since Riley hired him last year. The players expect an easy transition.

"Coach Ruff is a great guy," cornerback Tre Norwood said. "From the first day he stepped on campus, he was just that guy the players were attracted to because he's a great players' coach. He's always going to joke around with you, play around with you, but when it comes time to get serious, he's going to be hard on you and coach you because that's the love he has for each and every one of us."

The Sooners said the practices have been intense since McNeill took over. Often, the first offense has been matched up with the first defense.

"This past week, this bye week was definitely one of our most competitive weeks of practice of the year, since camp," quarterback Kyler Murray said. "I think we got a lot of good work in, good-on-good work in. It was competitive all week. I think that'll come into this week."

Part of Oklahoma's motivation comes from still being in a good place. The Sooners remain in position to challenge for a spot in the College Football Playoff if they win out.

"To me, everything feels the same despite the loss (to Texas) and losing coach Stoops," Murray said. "All we can do is control what we can control as players. Moving forward, we've just got to continue to practice hard, continue to get better and at the end of the day we'll end up where we want to be."