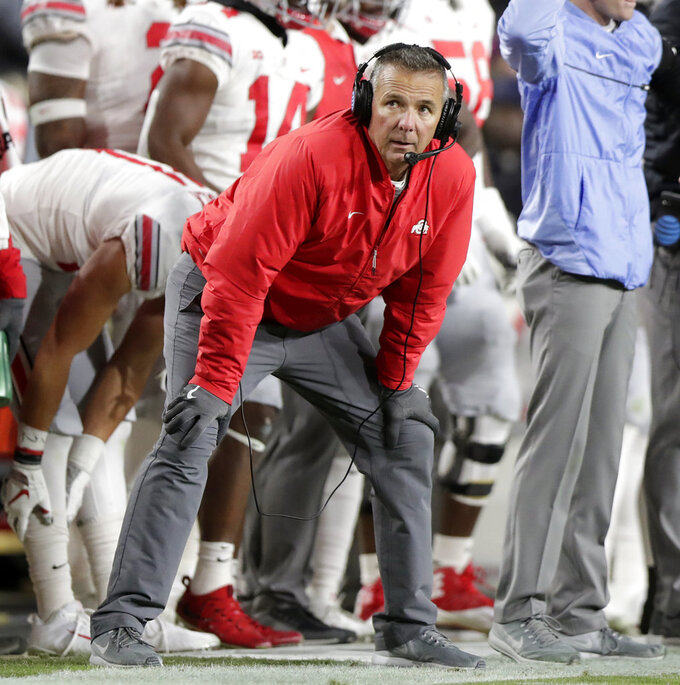 FILE - In this Oct. 20, 2018, file photo, Ohio State head coach Urban Meyer watches from he sideline during the first half of an NCAA college football game against Purdue, in West Lafayette, Ind. Retiring Ohio State coach Urban Meyer isn't easing out of the job just yet, not as long as there's one more game to win. Buckeyes players said this week that Meyer has been at the Woody Hayes Athletic Center for every practice and is fully engaged in preparations for the Rose Bowl. As usual, he's still sweating the small stuff. That kind of intensity made him one of the greatest college coaches of all time, but it also hastened his exit from the game. (AP Photo/Michael Conroy, File)

COLUMBUS, Ohio (AP) — Retiring Ohio State coach Urban Meyer isn't easing out of the job just yet, not as long as there's one more game to win.

Buckeyes players said this week that Meyer has been at the Woody Hayes Athletic Center for every practice and is fully engaged in preparations for the Rose Bowl. As usual, he's still sweating the small stuff. That kind of intensity made him one of the greatest college coaches of all time, but it also hastened his exit from the game.

Meyer announced Dec. 5 he would step down after the Jan. 1 game and hand the keys to the program to offensive coordinator Ryan Day. Debilitating headaches caused by a cyst in Meyer's brain worsened throughout the season, and he said he needs to step away from the high-stress job. His season started with a three-game suspension over mismanagement of now-fired assistant Zach Smith, who had been accused of domestic abuse.

By all accounts, he hasn't taken his foot off the gas yet, even if he seems to be enjoying himself more than usual.

"Usually coach Meyer is really tough on us, but it brings the best out of us," running back Mike Weber said. "But lately it is good to just see him smile and joke around and everything is not always about football. You get to enjoy him kind of like a father figure, just enjoy having normal conversations and see a different side of him."

"Seeing a smile on his face brings a smile to your face," receiver Johnnie Dixon said, "because you see nothing but joy and know he's at peace right now."

Despite emerging with an 11-1 record, a second-consecutive Big Ten championship, Rose Bowl berth and No. 6 ranking, this season was a rough one for the seventh-year Ohio State coach.

It began with a three-game suspension . When he got back, he lost star defensive end Nick Bosa to a season-ending injury and the defense struggled, leading to a loss at Purdue on Oct. 20 that ultimately kept the Buckeyes out of the College Football Playoff.

Meyer seemed in pain at times on the sideline. During one game in early October, he dropped to a knee because of a severe headache and was treated by medical staff.

All of that, he acknowledged, contributed to his decision to retire but remain in Columbus and stay connected in some capacity to Ohio State. He said he won't coach again.

"I don't think that it has dampened any spirits," offensive tackle Isaiah Prince said. "I think it is a little emotional because coach Meyer has done a lot for us, especially me. I am forever grateful for him, but I think a lot of us have the attitude to just go out with a bang and send coach Meyer out the right way."

The Buckeyes face No. 9 Washington, the PAC 12 champion, in Pasadena.

"(He's) still driving, still pushing us," defensive tackle Robert Landers said. "You mess up, he's gonna tell you about it, so nothing has changed. I feel that's a part of what coach Meyer is. He's naturally a competitor. Stepping out is one of the hardest things he's had to do and while he's still here in the facility, he's not gonna change. It's in his nature. He couldn't help it if he wanted to."

Players said the "win one for coach" talk is intensifying.

"When one of your toughest soldiers is calling it quits, we need to go out with a bang," Dixon said. "It means a lot to us and a lot to him — all the work we've put in together. It's a good thing to leave him with something that would mean a lot to him, which is another win."

As expected, junior defensive tackle Dre'Mont Jones said he's foregoing his senior year to enter the NFL draft. Several Ohio State players will decide whether to leave early for the draft, but they are waiting until after the Rose Bowl to make any announcement.

Quarterback Dwayne Haskins Jr. is among them. The Heisman Trophy finalist broke scores of single-season passing records in his first year as a starter. If he leaves, which he is expected to do, he's projected to be a first-round pick.