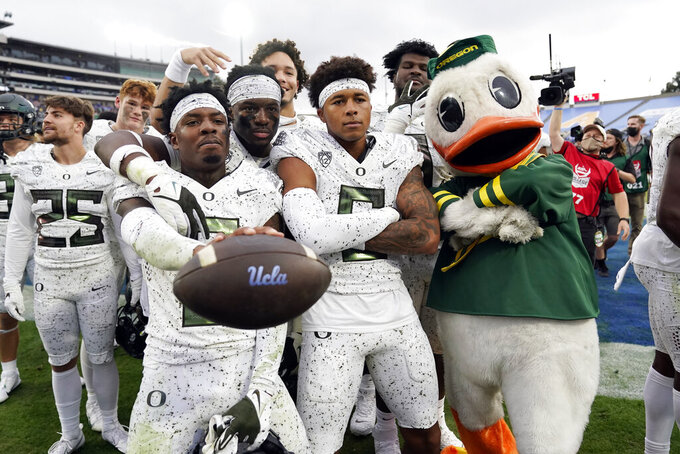 Line: Oregon by 24, according to FanDuel Sportsbook.

Following last weekend's 34-31 victory at UCLA, Oregon jumped three spots in the AP Top 25. The Ducks, who beat Ohio State but fell to Stanford, will have to win out to have a chance of making the College Football Playoff. Oregon is the lone ranked Pac-12 team. Colorado has struggled, and on Monday Buffaloes coach Karl Dorrell announced that offensive line coach Mitch Rodrigue had been relieved of his duties. Colorado is coming off a 26-3 loss at California.

Colorado quarterback Brendon Lewis is one of just seven Power Five quarterbacks who are classified as freshmen this season. He'll face an Oregon defense that has 11 interceptions, led by Verone McKinley III, who ranks second nationally with four interceptions. Lewis will also have to face Heisman hopeful Kayvon Thibodeaux, who had nine tackles and 4.5 tackles for loss — including two sacks — against UCLA.

Colorado inside linebacker Nate Landman became just the sixth player in Buffs' history with 400 career tackles last week. The fifth-year senior's status is up in the air for Saturday because of a soft-tissue injury and he'll likely be a game-time decision.

Oregon quarterback Anthony Brown faced boos the last time he played at Autzen Stadium, but his team has rallied behind him. Last week he threw for a career-high 296 yards against UCLA, and ran for 85 yards and a score. After the victory, coach Mario Cristobal said “Hey! No more booing at Autzen!”

Oregon has been in the top 10 for seven straight weeks. ... It is the second of back-to-back road games for Colorado. ... The Buffaloes are 3-6 all-time in Eugene. ... Oregon has won 16 straight games at Autzen, third-longest active streak in the nation. ... Colorado freshman Brenden Rice, son of 49ers great Jerry Rice, returned a kickoff 67 yards against Cal, the longest return for the Buffs since 2012. ... Against UCLA, Oregon running back Travis Dye became the first FBS player to run for a touchdown on four consecutive carries.