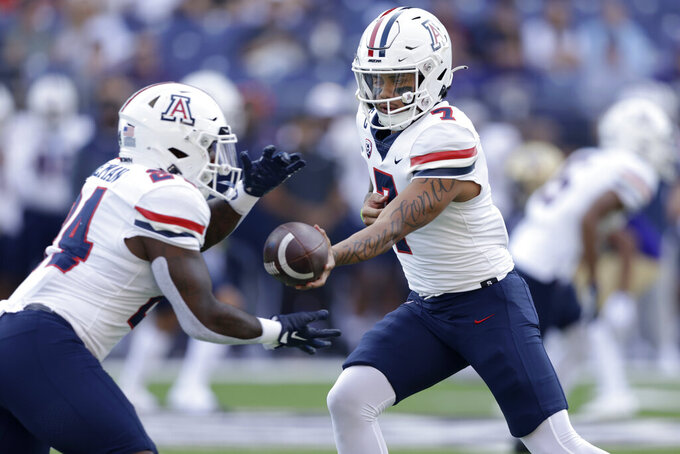 Arizona quarterback Jayden de Laura hands off to running back Jonah Coleman during the first half of an NCAA football game against Washington, Saturday, Oct. 15, 2022, in Seattle. (AP Photo/John Froschauer)

SEATTLE (AP) — Michael Penix Jr. passed for a school-record 516 yards and four touchdowns and ran for another score and Washington beat Arizona 49-39 on Saturday.

Penix hit Rome Odunze on scoring passes of 45 and 48 yards in the decisive third quarter to help the Huskies snap a two-game losing streak. The junior transfer entered the game as the nation’s second-leading passer and didn’t disappoint in a game that featured the Pac-12 Conference’s top two offenses and two of its star quarterbacks.

Penix led the Huskies to 608 total yards of offense and, along with breaking Cody Pickett’s passing record of 455 yards, he set the school record for total yards with 529, breaking Marcus Tuiasosopo’s record (509 yards).

“It’s not just about what he did statistically,” Washington coach Kalen DeBoer said. “He just keeps putting the pressure on and leading the charge to help us win the football game. We needed all those points and all those yards that he gave us.”

Penix led the Huskies to a quick 7-0 lead on their first drive, hitting Jalen McMillan in the back of the end zone for a 23-yard touchdown. Jayden De Laura tied the game two drives later when he hit Tetairoa McMillan, who broke a tackle on his way to a 46-yard touchdown.

Tailback Cameron Davis put Washington up 14-7 with a 1-yard dive early in the second quarter, one of two scoring runs.

The Huskies’ early lead might have been bigger, but the Wildcats defense came up with two fourth-and-short stops in the first half. Jalen Harris and Jacob Manu stuffed Taulapapa on fourth-and-2 in the first quarter and D.J. Warnell Jr. stopped Cameron Davis for no gain on fourth-and-1 at the 19 in the second quarter.

De Laura tied it 14-14 on a 39-yard pass to Dorian Singer, who came wide open down the right sideline when his defender, Jordan Perryman, came up lame and began to limp.

He kept it rolling, hitting Odunze for a 45-yard touchdown and a 28-14 lead just 46 seconds into the second half. And he added an 8-yard scoring run midway through the quarter to answer a Jonah Coleman 3-yard touchdown dive and keep the Huskies up 35-21.

Then Penix seemed to put the game out of reach with another deep shot to a wide open Odunze, who caught the 48-yard touchdown to make it 42-24 with 1:56 left in the third.

De Laura, last seen in Seattle leading an upset of the Huskies last season for Washington State, escaped the Washington rush again and again to keep Arizona in it. He hit Tetairoa McMillan again midway through the fourth, this time from 26 yards out, to cut the lead to 42-37. But Penix led another long drive capped by a 19-yard Davis scoring run with 5:25 left for the win.

Arizona: No sacks, no turnovers forced. De Laura planted a Washington State flag in Huskies turf after leading the Cougars to victory over UW last season. In two games at Husky Stadium (one as a Cougar), de Laura is 52 for 66 passing (78.8 percent) for 645 yards, four touchdpowns and no interceptions. He now has three 400-yard passing yard games and all three have come in his last four games. Though he played a spirited game, the Wildcats showed they need more than the sophomore quarterback to compete. Other than those four-down stops, they made very few defensive plays.

Washington: The Huskies stopped their slide and won their sixth straight against Arizona. They should have with a more talented roster than the bottom-tier conference foe. But Washington will learn how far it has come this season under Kalen DeBoer with road trips in two of its next three games.

Odunze became the first Washington wide receiver to record 100-plus yards receiving in four straight games after finishing with nine catches for 169 yards. Odunze’s first touchdown came in a circus catch where he knocked the ball into the air, then caught it as he crossed the goal line. The second touchdown catch came after he shook free of the defense. Penix found him standing along at the 1 for the easy walk in.

Washington: The Huskies travel to Cal next Saturday.