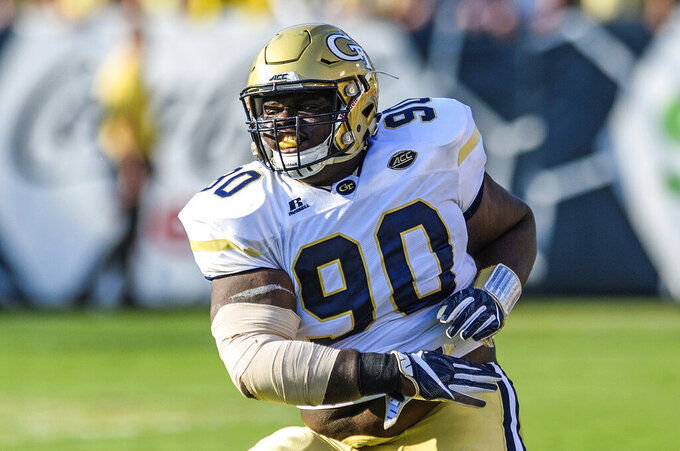 FILE - In this Saturday, Sep. 10, 2016, file photo, Georgia Tech defensive lineman Brandon Adams reacts during the second half of an NCAA football game against Mercer, in Atlanta. Georgia Tech is mourning the death of one of its own while trying to prepare for a season, trying to move on without one of its brothers but still coming to grips with the shocking death of defensive lineman Brandon Adams last weekend. (AP Photo/Danny Karnik, File)

There was nothing in Adams' autopsy to indicate foul play and no evidence to warrant a criminal investigation, Atlanta police spokesman James H. White III said in a statement to The Associated Press.

According to a police report accompanying the statement, Adams collapsed in a garage area near the Georgia Tech campus early Sunday morning.

"They took a water break, and when Mr. Adams went to drink some water he fell backward, hit his head on the ground, started to convulse, and foamed up white substances from his mouth," the report said.

The player was pronounced dead at nearby Emory hospital. Campus police, who had been investigating the incident, called in Atlanta police after learning of Adams' death. An investigator said "it appeared to be natural and that there was no apparent foul play involved."

The autopsy was conducted Monday by the Georgia Bureau of Investigation, which did not rule on the cause of death. Police are awaiting the results of toxicology and other lab reports before deciding if further action is warranted.

The school announced Adams' death on Sunday, two days before the start of spring football practice. He was 21.

White, a 6-foot-2, 325-pound rising senior, had battled weight issues but was coming off his best season, starting three games in 2018. He was expected to play a key role on Georgia Tech's defensive line this season, their first under new coach Geoff Collins.

Police did not release further details of the dance routine, but Omega Psi Phi issued a statement this week saying Adams was in the process of becoming a member of the fraternity and that it was offering grief counseling to the player's family and friends.

"We particularly mourn his passing since he was a candidate to become a man of Omega and we were ready to welcome him into our fold," the fraternity said in a statement issued to WSB-TV in Atlanta. "We pray that God's comfort embraces Brandon's entire family, his fellow Omega initiates, his teammates, his university, and his true friends as well as all that were fortunate to ever meet Brandon Alonzo Adams."

Percussive dance routines, known as stepping, are an important part of social life within African-American fraternities, including celebrations to mark the initiation of new members. Many of these organizations, including Omega Psi Phi, have created their own signature moves.

Omega Psi Phi announced shortly after Adams' death that it was imposing an indefinite moratorium on most membership selection and social activities. There was no mention of Adams' death in the statement on the fraternity's website, but national president David Marion said he was obligated to protect the organization "at any cost."

"No workarounds attempting to circumvent this moratorium, including, but not limited to underground processes, hosting Omega events in the names of other individuals or entities, or purchasing private insurance, will be approved or tolerated," Marion said. "Sanctions will be issued up to expulsion and chapter revocation."

The fraternity's executive director, Kenneth Barnes, did not respond Friday to an email from the AP seeking comment.

The Yellow Jackets began spring practice as scheduled, but will be at Adams' funeral Saturday in his hometown of Nashville, Tennessee. The entire team, along with coaches, administrators and former players, plan to attend.