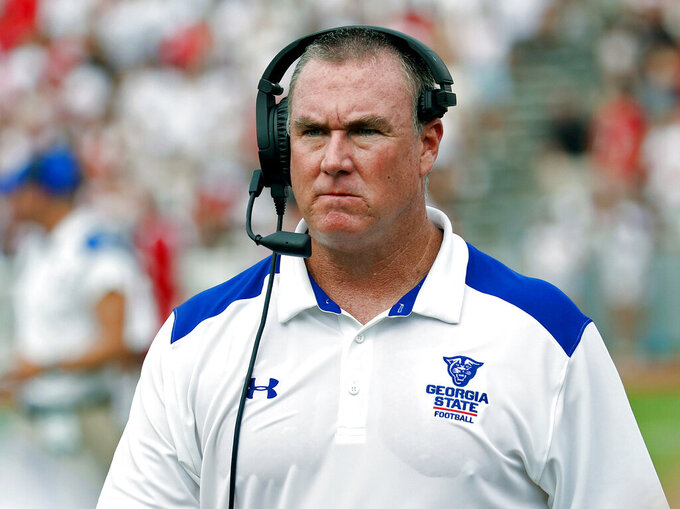 FILE - In this Sept. 8, 2018, file photo, Georgia State head coach Shawn Elliott walks the sidelines during the first half of an NCAA college football game against North Carolina State in Raleigh, N.C. The NCAA’s new transfer rules, including the creation of the so-called portal, have changed the process by which athletes switch schools, loosening some restrictions and leading more players to explore options. Elliott said if the Panthers bring in a transfer he prefers it to be a player with which the staff is already familiar. (AP Photo/Chris Seward, File)

Justin Crouse, director of player personnel for Memphis, makes his first check of the transfer portal around 8 a.m. each day, searching for new names in the NCAA's database of football players looking for a new school.

He checks again at lunch and one more time — at least — before he calls it day.

For years, Crouse's primary duties for Memphis have been identifying and evaluating recruits in high school and junior college. That was pre-portal.

"I would say 40 percent of the time now is concentrating on guys that are leaving other places," Crouse said.

The NCAA's new transfer rules have changed the process by which athletes switch schools, loosening some restrictions and leading more players to explore options. Football coaches have responded by throwing more manpower toward monitoring that growing talent pool and scouting the portal.

"We get an alert every day that somebody gets added into the portal, but then we get a weekly breakdown of position, hometown," Memphis coach Mike Norvell said. "And then trying to collect all the information, the video, to get a sense of who these kids have developed to be."

The portal is the NCAA's cryptic name for the database it maintains to track which athletes — in all sports — have notified their schools they wish to transfer. The big change from last year's rules reform was athletes no longer needed to request permission to transfer. Schools and coaches can no longer stop a transfer and dictate where the athlete goes. The point of the portal was to create transparency and order.

Before rules reform, the transfer process could be clandestine. Because athletes needed permission from their current coach to be contacted by other schools, it encouraged third parties to get involved, an active grapevine filled with high school and 7-on-7 coaches, personal trainers, parents and friends of friends.

"Before it was by word of mouth," Minnesota coach P.J. Fleck said. "Somebody gave you a call, 'This guy might be transferring,' and get going. Now, it's every day we have people that are in our program checking the portal."

The portal provides more exposure for the transferring player and, ostensibly, more opportunities. Instead of deals being struck under the table even before players officially were granted their release, now every school in the country has chance to make a pitch.

"It takes away ... the middleman in making the connection," Norvell said.

Georgia Tech coach Geoff Collins said: "I think it's beneficial for the players."

Portal patrol duties tend to fall to the player personnel department — or some equivalent.

Crouse said he prioritizes players from Memphis' recruiting area and those who play positions of team need. All highly productive players and quarterbacks get a look, too. Crouse compiles background material and film, going back to high school, using services such as Hudl and Pro Football Focus. He then sends that information to the Memphis coaches sorting by position, recruiting area and previous relationships.

Georgia coach Kirby Smart compared working the portal to NFL teams having a portion of their scouting department dedicated to veteran free agents.

"We just happen to have a larger pool (of players), which is the portal," Smart said. "We know most of the guys on the board because we knew them coming out of high school and so we had a background on that. We said, 'yeah, we didn't think that guy was very good there and that's why he's leaving. So we'll pass. That guy is an intriguing guy because we don't have that position or we just had a mass exodus of three guys leave some position, juniors came out early we weren't expecting. Better go to the portal, find a good backup.'"

The portal has opened up the process, but ultimately relationships built during high school recruiting still play a major role.

Oregon coach Mario Cristobal said he wants his staff to keep track of players who really liked Oregon coming out of high school but chose to sign elsewhere.

"This is one we may want to keep on a hot file," Cristobal said. "So if it does happen, then you have the option to act relatively quickly."

Staffers are on the lookout not just for talent, but fit — on the field and off.

"He went to this college, but he's from here. Yeah, that raises attention regardless of position," Collins said. "He's leaving because he wants to be closer to home. Well, if his home is Dallas then don't worry, we're good."

Background checks might be the most important part of portal scouting. Why exactly is the player leaving?

It's those stories that have made some coaches stick to an old-school approach to pursuing transfers.

Georgia State coach Shawn Elliott said if the Panthers bring in a transfer he prefers it to be a player with which the staff is already familiar.

"But you know we do look at (the portal), but like I said I don't think you want to build your football program with a bunch of guys that have already quit somewhere," Elliott said.

And that grapevine is still plenty active.