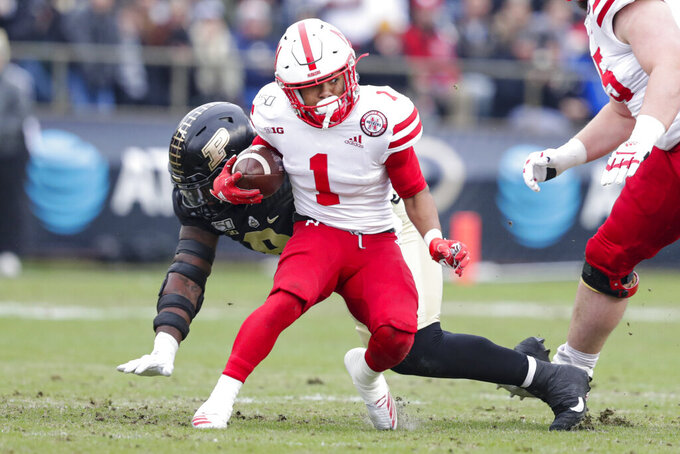 FILE - Nebraska wide receiver Wan'Dale Robinson (1) is chased down by Purdue defensive tackle Anthony Watts (8) during the first half of an NCAA college football game in West Lafayette, Ind., in this Saturday, Nov. 2, 2019, file photo. The NCAA made it official Thursday, April 15, 2021, announcing the Division I Council had voted to approve a proposal that would permit all college athletes to transfer one time as an undergraduate without having to sit out a season. Among the notable transferring football players who will now be eligible next season at their new schools are Wan'Dale Robinson, who switched from Nebraska to Kentucky. (AP Photo/Michael Conroy, File)

An NCAA rule change will allow football players to transfer once as undergraduates without sitting out a season. The change goes into effect for the 2021 season. It was not unexpected, but now that it is official a bevy of players are assured of being on the field this fall. Some of the most notable:

Demarkcus Bowman, RB, Florida (from Clemson): Bowman was a five-star recruit in the class of 2020, but didn't see much action for the Tigers as a freshman. He returns to his home state with the Gators' offense looking for playmakers. The sophomore should get the opportunity right away to live up to the recruiting hype.

Wan'Dale Robinson, WR, Kentucky (from Nebraska): The speedy and versatile Robinson caught 91 passes in two seasons with the Cornhuskers before returning to his home state to play for the Wildcats. Kentucky's offense was in need of game-breakers last season. Coach Mark Stoops will hope to get that from Robinson, who gained 1,494 yards from scrimmage and scored seven touchdowns with Nebraska.

Wanya Morris, OT, Oklahoma (from Tennessee): Morris was a two-year starter for the Volunteers after signing as a five-star recruit. The Sooners typically have one of the best offensive lines in the country, but they were in danger of entering 2021 thin at tackle until the Georgia native decided to head to Norman. He will compete for a starting spot.

Ryan Hilinski, QB, Northwestern (from South Carolina): Hilinski started 11 games as a freshman for the Gamecocks in 2019, but played just two last season. He was a four-star prospect out of Southern California. The Wildcats have started the last two seasons with transfer quarterbacks, getting good results from Peyton Ramsey (Indiana) in 2020 and not so good in 2019 from Hunter Johnson (Clemson).

Tykee Smith, S, Georgia (from West Virginia): Smith was a third-team All-American as a sophomore last season in Morgantown. The Philadelphia native landed in Athens shortly after his position coach with the Mountaineers, Jahmile Addae, made a similar move. He should slip right into a hole Georgia has in its secondary.

Tyrique Stevenson, CB, Miami (from Georgia): Stevenson was one of the top-ranked defensive back recruits in the country in 2019 and has been a contributor to Georgia's defense the last two seasons. After being used as more of a nickel back in the Bulldogs' scheme, he will likely be asked to fill a more traditional outside corner role for the Hurricanes as he returns to his home city.