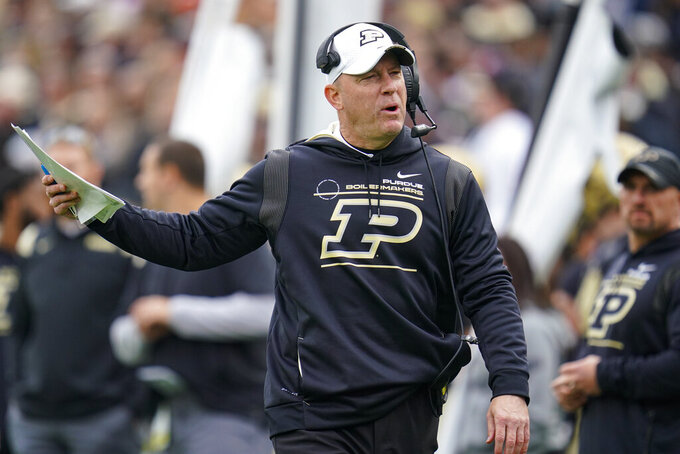 Line: Tennessee by 6 1/2, according to FanDuel Sportsbook.

Purdue needs a victory to finish with the Boilermakers' most wins in a season since 2003. A ninth win would be only the 12th time in the Boilermakers' 134-year history to win nine games in a season. Purdue also is looking for its first bowl victory since the 2017 Foster Farms Bowl in coach Jeff Brohm's first season. Tennessee already has more than doubled the wins of a a season ago. Coach Josh Heupel can become the sixth Volunteers' coach all-time to win eight or more games in his debut season. Tennessee is playing after university officials chose not to self-impose a bowl ban after firing Heupel's predecessor in January.

Tennessee's up-tempo offense against Purdue's defense. The Volunteers not only score fast, they have outscored opponents 169-44 in the first quarter this season. Purdue ranks 19th nationally allowing 20.5 points a game. The Boilermakers also have 14 takeaways over the past seven games after having only two combined through the first five games.

Purdue: QB Aidan O'Connell. The fifth-year senior led the Big Ten completing 73.5% of his passes and has completed 74% or better in seven straight games. O'Connell was at his best against top competition, averaging 433.7 yards, completing 75.3% of his passes and throwing nine TDs with no interceptions in games against Iowa, Michigan State and Ohio State.

Tennessee: QB Hendon Hooker. The senior ranked third nationally and led the Southeastern Conference with a 182.15 passer rating. He took over as the starter Sept. 18 and went 6-4 as a starter throwing 24 TD passes with only two interceptions. He had 2,866 yards of total offense completing 68.6% of his passes. He has 26 TD passes and five rushing TDs overall. Hooker has thrown at least one TD pass in 11 straight games, tied for the fourth-longest streak in school history.

Purdue won the only other game between these teams in the Bluebonnet Bowl 27-22 on Dec. 31, 1979. Purdue is one of 48 schools Tennessee has faced only once, 23 of which remain in FBS. ... This is Purdue's second berth and Tennessee's third trip to the Music City Bowl, now sponsored by TransPerfect. The Boilermakers lost 63-14 to Auburn in 2018. Tennessee lost to North Carolina in double overtime in 2010 and beat Nebraska 38-24 in 2016. ... Purdue is 10-9 in bowls all-time and third in Brohm's five seasons. ... Two of Purdue's victories came over previously unbeaten No. 2 Iowa and No. 3 Michigan State, giving the Boilermakers two wins over Top Five teams for the first time since 1960. ... Purdue completed a school-record 381 passes, topping the mark of 377 set in 1998 when Drew Brees completed 361 passes. ... This is Tennessee's 54th bowl, which ranks fifth all-time behind Alabama, Georgia, Texas and Oklahoma. Tennessee ranks seventh nationally with a 29-24 bowl record. ... Tennessee has won four straight bowl games, all against Big Ten opponents, and is 11-5 all-time against Big Ten teams in bowls.