Questions abound as No. 11 Miami prepares for Virginia 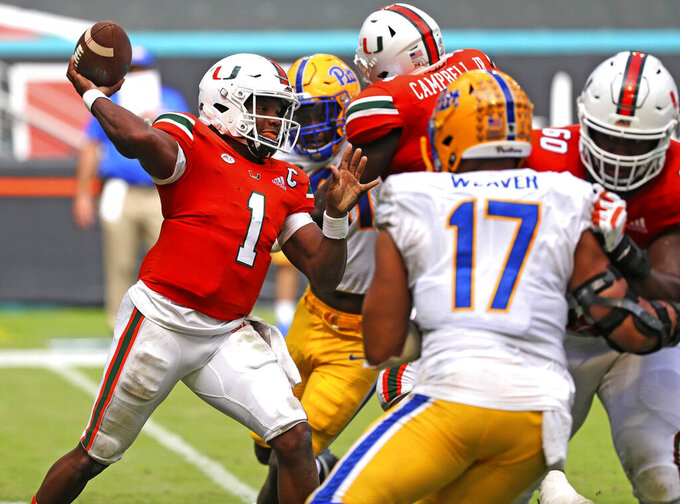 No. 11 Miami (4-1, 3-1 Atlantic Coast Conference) plays host to Virginia (1-3, 1-3) this week, each side looking for clarity about certain elements of their offense. The Hurricanes listed nine receivers as starters for three spots on this week’s depth chart, an obvious sign that the competition for playing time there is wide open. And Virginia is coming off a week where it used two quarterbacks while waiting for starter Brennan Armstrong to satisfy requirements for being removed from concussion protocols.

If recent Miami-Virginia history is any guide, this one might not be an offensive showcase.

He’s right: Virginia won 16-13 two years ago and Miami won 17-9 last season. Since the start of the 2018 season, only six of 145 ACC games saw a team win by scoring 17 points or less — and the Hurricanes and Cavaliers are responsible for two of those matchups.

Virginia hasn’t shown that kind of defense of late, giving up 41, 38 and 40 points in its last three games, all of which were sizable losses. But Cavaliers coach Bronco Mendenhall believes his team is closer than some might think to being on the right path.

“I love my team. I love who they are. I love how they prepare,” Mendenhall said. “And yeah, a handful of plays each week are what we need to make to continue to grow and improve our program. But those areas are, I would say, a consolidation of where most of our focus is right now.”

With Armstrong out, the Cavaliers used Lindell Stone and Ira Armstead at quarterback last week. The uncertainty there — whether Armstrong or Stone starts this week — is a complexity for Miami, since Diaz said the Cavaliers’ scheme changes considerably depending on who is under center.

“It’ll be a challenge for our defense in terms of their preparation and awareness during the game,” Diaz said.

Here’s some of what to know going into Saturday’s game:

Under normal circumstances, Virginia would get the chance to play at Hard Rock Stadium once every two years. But Saturday’s game will be the Cavaliers’ third trip there in about 54 weeks; they lost to Miami 17-9 on Oct. 11, 2019 and then fell 36-28 in last season’s Orange Bowl to Florida on Dec. 30. The ACC scheduling model, which would have ordinarily sent Miami to Virginia this season, was changed considerably for 2020 — and, yes, calls for Virginia to come back to Miami yet again in 2021.

Hurricanes QB D’Eriq King started the season by completing 67% of his passes with no interceptions in Miami’s first three games, and has seen those numbers slip to 47% with four interceptions in his last two games. Part of that is based on the opponents — Clemson and Pitt — but part is also based on receivers not playing to Miami’s liking. That’s why Miami opened up the receiver playing-time competition in practice this week, raising the chance that some younger wideouts might get called upon. “Listen, we’re trying to get more guys we can play, because that’s ultimately what makes the whole football team better,” Diaz said.

Virginia has been one of the best teams in the country this season in terms of not being penalized, with only 18 flags through four games — and only two holding calls that have stuck, both of them coming in last week’s loss to Wake Forest. Miami hasn’t shown the same discipline; the Hurricanes are getting flagged 8.4 times per game so far, a rate that only 13 teams out of the 77 that have played entering this week are exceeding.

No active player in major college football has more career sacks than Miami DE Quincy Roche, the graduate transfer from Temple. He has 28.5 sacks, 6.5 more than anyone else at the FBS level — plus is tied for second among active FBS players in forced fumbles with seven.