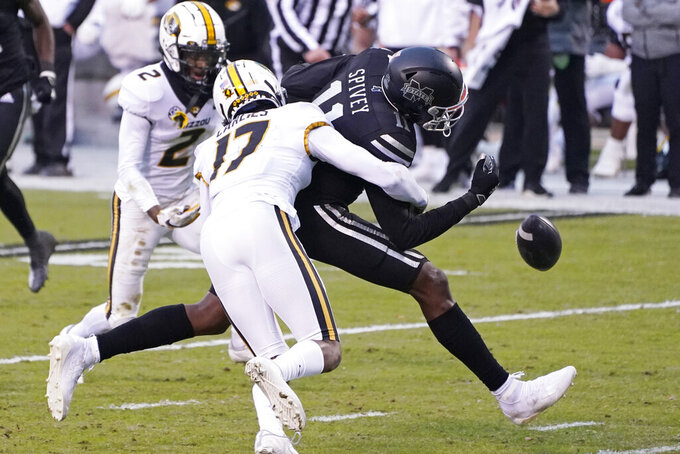 Mississippi State wide receiver Geor'quarius Spivey (11) has the pass knocked away by Missouri defensive back Jaylon Carlies (17) during the first half of an NCAA college football game, Saturday, Dec. 19, 2019, in Starkville, Miss. (AP Photo/Rogelio V. Solis) 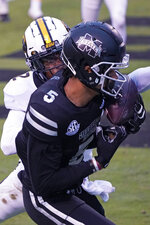 STARKVILLE, Miss. (AP) — Will Rogers threw for 295 yards and three touchdowns to lead Mississippi State to a 51-32 victory over Missouri on Saturday.

After weeks of floundering offensively, Mississippi State (3-7, 3-7 Southeastern Conference) finally got many of their young weapons working in tandem.

“I thought we’ve had it in us, but as far as getting everything congruent, that’s been the challenge,” first-year coach Mike Leach said. “And it was a challenge tonight too. We still have kind of a skeleton crew out there.”

The Bulldogs racked up 446 yards of total offense in the game, including a season-high 151 yards on the ground. Their previous high was 87 yards in a loss to Arkansas in the second game of the year.

“I thought we played better on the offensive line, and I thought our backs did better job reading holes, things like that,” Leach said. “Some of the balls we threw early probably opened things up for us too.”

Missouri (5-5, 5-5) logged 342 yards of total offense, but many of them after the outcome of the game was already decided, and they turned the ball over four times. This is the second-straight .500 finish for the Tigers.

“I don’t think we drank any Kool-Aid,” Missouri coach Eli Drinkwitz said. “The fact is, we’re down to 52 players. The guy that was our starting quarterback the first two games of the season played safety for us the entire second half. We’re doing every single thing we can just to play the game. When you get down to this kind of stuff, execution is not where it needs to be to be successful, and that’s what happened.”

Mississippi State led 27-10 at the half and Jo’quavious Marks punched in another score on the opening drive of the third quarter. Marks had 12 rushes for 70 yards. Jaden Walley led all receivers with five catches for 129 yards. Rogers was 21 of 36 and had one interception.

“We’ve had a high tempo in practices, and it finally carried over into the game,” Marks said. “We’ve been trying to put that together. Now I think it’ll bleed over into next season and into the bowl game.”

For the Tigers, Conner Bazelak was 22 of 38 for 225 yards, two touchdowns and three interceptions. Larry Rountree led all rushers with 121 yards and two touchdowns.

Missouri: Drinkwitz, the other first-year head coach in this game, finishes the season on a two-game losing streak, but is still ahead of schedule with a third-place finish in the SEC East and wins over Western Division foes LSU and Arkansas.

Mississippi State: If the Bulldogs can improve their running game enough to keep defenses honest, as they did tonight, the Air Raid might just be a winning ticket in the SEC. More than half of the team’s offensive production this year has come from true freshmen.

“You know we have been competitive all year, we just do it incongruently,” Leach said. “We do it in spurts and segmented. We’re a young team anyway, but then you add contact tracing and all that stuff and it’s been hard to get the tent over the circus, so to speak.”

Both teams are expected to receive bowl invites on Sunday.