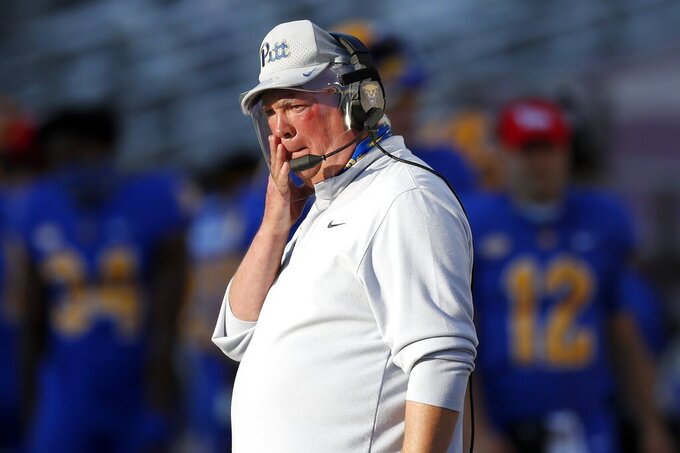 PITTSBURGH (AP) — Pat Narduzzi calls it “the 24-hour rule.” Win or lose, the Pittsburgh coach expects the Panthers to move on quickly regardless of the outcome during a given week.

The mental gymnastics are getting tougher. So is the path to the season Pitt looked like it might be on its way to as October began.

Pitt was unbeaten, ranked 24th and leading North Carolina State at home with less than 2 minutes to go on Oct. 3. Sixteen days later, the Panthers are 3-3 (2-3 Atlantic Coast Conference) and facing a schedule that includes visits by No. 3 Notre Dame and No. 19 Virginia Tech as well as a trip to top-ranked Clemson.

The energy that surrounded the program during a 3-0 start has waned. The running game remains stuck in neutral. Senior quarterback Kenny Pickett is dealing with an ankle injury that could force him to sit out when the Fighting Irish (4-0, 3-0) come to Heinz Field on Saturday. While the defense remains among the best in the country at getting to the quarterback, it has also allowed 11 touchdown passes over its last 12 quarters, including four against a banged-up Miami offense in a 31-19 loss last weekend.

“We made some mistakes in really all phases for that matter, things that hurt you as the game goes on,” Narduzzi said. “I really don’t feel any different from what I felt like on game day. A couple calls, obviously questionable, as far as penalties, those discipline things that drive you nuts as a coach. We’ve got to do a better job coaching them.”

Time is running out, a not uncommon occurrence for a program that has the fourth-most wins in the ACC during Narduzzi's six-year tenure (26) but has typically struggled to emerge from the muddled middle of a league riddled with parity behind Clemson. Pitt has been somewhere between 4-2 and 2-4 at the six-game mark each of the last five seasons. The chance for a rare hot start ended when the Wolfpack went the length of the field twice in the fourth quarter to pull out a 30-29 win and Boston College stunned the Panthers in overtime seven days later.

Losing on the road in a competitive game to the resurgent Hurricanes without Pickett — by far Pitt's best offensive player — is hardly a red flag. But given the slim margin for error, the Panthers repeated some of the mistakes that have bedeviled them during their slide.

Pitt drew 10 penalty flags against the Hurricanes and currently rank second in the ACC in total penalties and fifth in penalty yards. It is 70th (out of 77) in the country in rushing, putting more pressure on the quarterback — be it Pickett or backup Joey Yellen — to pick up the slack.

While Yellen played admirably, throwing for 277 yards and a touchdown, in place of Pickett last week, he took four sacks and fumbled once to set up a Miami score.

“The (running) holes closed fast as the game went on,” Narduzzi said. “We didn’t do a great job blocking. I think it will be a wake-up call in that (offensive line) room that we got to block them.”

Narduzzi is hopeful the chance to play in front of a home crowd will help the Panthers break out of a funk that is threatening to ruin a once-promising season. About 5,500 fans will be allowed into Heinz Field when Pitt faces Notre Dame for the 72nd time.

“That will be a motivation for our kids I think just to be able to have their families there, be with their families after a game,” Narduzzi said. “Again, play for your people. I think that’s always a big-time motivation when your family can come watch you play. You want to put on a show when that happens.”

Which is a necessity if the Panthers want to reignite September's optimism.

“I think we got great kids,” Narduzzi said. “Again, they’ve come back every time so far. I don’t expect it to be any different. Just keeping them locked into what the task at hand is.”