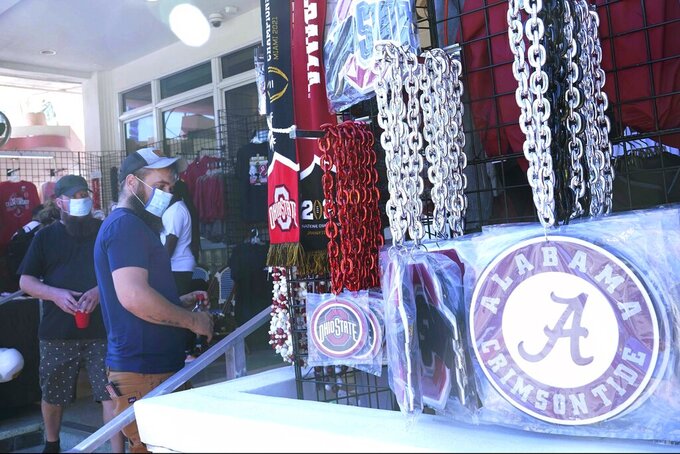 Steve Sarkisian took full advantage of three of the most dangerous weapons in college football in their final act together.

The top-ranked Crimson Tide's offensive coordinator put on another dominating play calling clinic during Monday night's 52-24 win over No. 3 Ohio State in the College Football Playoff national championship game at Hard Rock Stadium in Miami Gardens, Florida. Now Sarkisian is off to try to work the same artistry as the Texas Longhorns' head coach.

He helped Alabama win it all with one of the nation's most explosive offenses, just like old Tide teams won with dominant defenses.

“He’s just done a fantastic job this year,” Alabama coach Nick Saban said. “I can’t even put it into words what a great job he’s done and how much confidence the players have in the plan and the execution.

“Our offense was really the key to the success of this team. We’re an OK defensive team, not a great defensive team. We played well enough and got enough stops but the offense was dynamic, and that’s what made the difference."

Sarkisian dialed up plays to help get Heisman Trophy-winning receiver DeVonta Smith open — repeatedly — in the first half. He made good use of tailback Najee Harris' versatility and, of course, quarterback Mac Jones' poise and accuracy.

It was a grand finale for Sarkisian, whose two seasons running Alabama's offense produced huge numbers. The Tide racked up 621 yards against the Buckeyes on Monday.

Jones became one of the nation's best quarterbacks in his first full season as a starter.

“Coach Sark, all year long, he’s called great plays,” the quarterback said. “We really just think alike. I know exactly what he’s looking for and we had that communication that every quarterback and offensive coordinator wants. He put our best players in position to make plays. My job was only to get them the ball.”

Somehow, college football's best receiver kept getting open, on a screen for a touchdown, on a deep ball that somehow ended with Ohio State linebacker Tuf Borland chasing him in a huge mismatch. And on another where Smith went in motion, then reversed direction and was in the clear yet again.

It didn't distract him from his second shot at a national championship as the Tide's offensive boss. Jones said he stayed “locked in.”

“That just shows the type of person he is, and I know he’s going to do great things in the future,” the junior quarterback said. “And we just all love coach Sark.”

Saban elevated Sarkisian from analyst to coordinator a week before the title game in January 2017 after Lane Kiffin left early for his new head job at Florida Atlantic. Clemson beat Alabama 35-31 and Sarkisian left for the NFL's Atlanta Falcons before ultimately returning.

This time the former USC and Washington head coach had several of the nation's top playmakers and an offensive line honored as the nation's best.

Smith, Jones and Harris were all among the top five Heisman vote-getters.

Left tackle Alex Leatherwood won the Outland Trophy as the top interior lineman and Landon Dickerson (out with a knee injury for the playoffs) won the Rimington Trophy as the best center.

Smith had 12 catches for 215 yards and three touchdowns in the first half. And when he left with a dislocated finger on his right hand early in the third quarter, Sarkisian dialed up tight end Jahleel Billingsley and backup tailback Brian Robinson Jr. Then Jones found Slade Bolden for his first career touchdown catch.

And Sarkisian finished the job on a triumphant note.