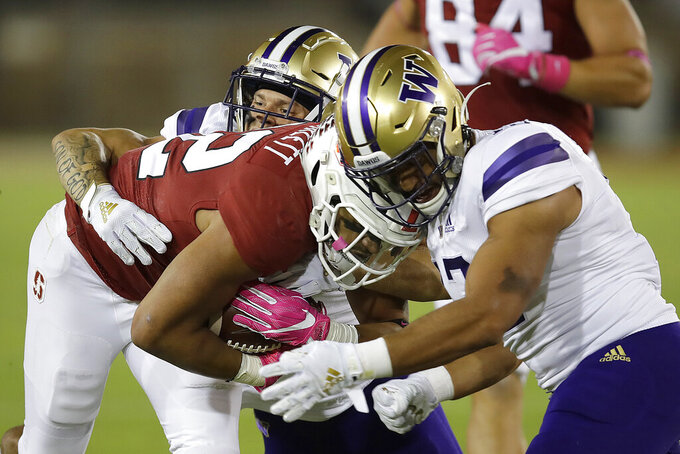 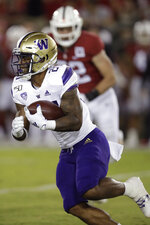 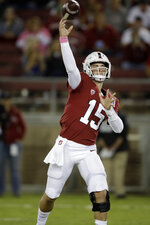 STANFORD, Calif. (AP) — Cameron Scarlett had the best day of his career, yet all Stanford coach David Shaw wanted to talk about was the fifth-year senior's blocking on a pass play early in the second quarter that led to a Cardinal touchdown.

"That was the biggest challenge we gave Cam this year, was that he needs to be a great pass protector," Shaw said. "We're faking on the left side and the safety blitz came on the right and Cam came all the way down and made a great block and allowed us to get that ball off. I can't say enough about where Cam Scarlett is right now. Just playing such great football."

Scarlett rushed for a career-high 157 yards and a touchdown, quarterback Davis Mills had another impressive game in place of injured starter K.J. Costello before apparently getting hurt himself, and Stanford pulled off its biggest win of the season, stunning No. 15 Washington 23-13 on Saturday night.

"It's very satisfying but by no means are we satisfied," Scarlett said. "It felt good to get the win. We had so many guys go down and get hurt. But it feels good. We needed that and we're going to build on it."

"They played more physical than we did and they did a better job," Huskies coach Chris Petersen said. "We have to get better in the passing game. We needed touchdowns. Field goals are not going to do against this team."

Scarlett carried the ball 33 times, including nine times on Stanford's final drive when the Cardinal worked five minutes off the clock to seal the win.

"He's playing the best football of his career right now," Shaw said. "Just handed the ball to him repeatedly against loaded boxes even when they knew we were running the ball. Broke tackles, finished runs physically. Just an outstanding game by Cam Scarlett."

Mills was crisp until coming out of the game for an unknown reason in the middle of a scoring drive in the fourth quarter. Mills was 21-of-30 passing for 293 yards and a touchdown, but spent the final 9 minutes on the sidelines with what appeared to be a bag of ice wrapped around his left calf. Jack West ran the offense down the stretch.

Stanford got a big lift from its defense, which harassed Eason into an interception and forced a punt on Washington's first two drives in the fourth quarter.

But the Huskies were held to one touchdown and two field goals while the defense eventually wore down.

"We have to be ready to bend but don't break," Washington defensive back Myles Bryant said. "At the start of the game, they made plays and got down on us but we held them to field goals. Then they started scoring touchdowns."

Washington: The Huskies had seemingly gotten over their early issues and won three straight before falling to an unranked team for the second time this season. For a plethora of reasons, this one is more difficult to swallow than the loss to Cal in the Pac-12 opener. This was a game that Washington was counting on to fatten up in the standings. Now, the conference championship seems like a pipe dream.

Stanford: There wasn't much flashiness or big plays. Just a steady stream of Scarlett, efficient passing from Mills and consistent defense across the board. Cardinal coach David Shaw's teams are 26-18 when facing Top 25 opponents.

Washington was in position to move up a spot or two after No. Iowa lost to No. 19 Michigan earlier in the day. Instead, the Huskies are headed in the opposite direction and could fall out of the rankings entirely.

Stanford did a decent job pressuring Eason early, but the Cardinal didn't get to Washington's quarterback until midway through the third quarter when linebacker Gabe Reid dropped Eason for an 18-yard loss on a third-and-5 play. Washington's ensuing punt failed to cross midfield, setting up Scarlett's short touchdown run.

Salvon Ahmed, whose 89-yard touchdown against USC last week was the Huskies longest running play in 25 years, wasn't much of a factor against Stanford and spent most of his night on the sideline while Richard Newton took the bulk of carries. Ahmed, who has been nursing a leg injury that forced him to sit out the BYU game on Sept. 21, resurfaced in the fourth quarter, shortly before Newton went down with an unknown injury.

"Most people wouldn't understand a team like us playing with confidence but that's fine. People don't have to understand." - Stanford coach David Shaw.

Washington plays at Arizona on Saturday before coming home for a pivotal home game against No. 13 Oregon the following week.

Stanford gets an extended break before hosting UCLA in a Thursday night game on Oct. 17.