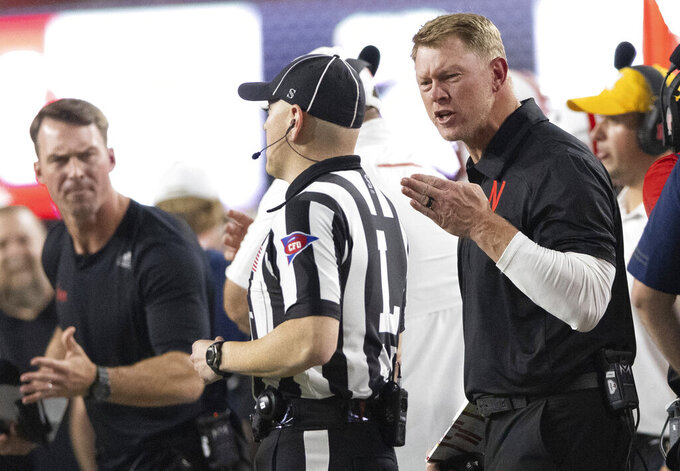 Nebraska coach Scott Frost protests a delay of game penalty for use of illegal signals, during the first half of the team's NCAA college football game against Michigan on Saturday, Oct. 9, 2021, in Lincoln, Neb. (AP Photo/Rebecca S. Gratz)

MINNEAPOLIS (AP) — Hints of that long-awaited breakthrough for Nebraska under coach Scott Frost have been apparent lately, as the Huskers more than held their own through a tough stretch on the schedule.

Their record has yet to reflect the progress, though, and the time to make this a feel-good season is running out. Their game at Minnesota on Saturday is a must-have.

“We haven't given up on each other,” quarterback Adrian Martinez said. “I have a lot of confidence in these guys, and I know it's mutual between all of us.”

With one-score losses to Oklahoma, Michigan State and Michigan over the last four weeks — all currently ranked in the top 10 of the Associated Press poll — plus a 56-7 victory over Northwestern nestled in there, Nebraska has been playing markedly better since a disheartening defeat in the opener at Illinois.

If the Huskers (3-4, 1-3 Big Ten) are going to qualify for a bowl game for the first time in five seasons, however, they’re almost certainly going to have to beat a Gophers team they’re 1-3 against since P.J. Fleck took over as coach.

After a week off and a home game against Purdue, Nebraska finishes with Ohio State, another bye, a trip to Wisconsin and the finale against Iowa. The Badgers are off to a rough start, but they still pose one of the toughest visits in the Big Ten. The Buckeyes and Hawkeyes are sixth and second, respectively, in the latest AP poll.

If a handful of plays went Nebraska's way, they'd probably be a ranked team themselves, status that was once an automatic for a program that claims five national championships. One of those pivotal moments was a fumble lost by Martinez on a run midway through the fourth quarter that fueled Michigan's rally for a 32-29 victory.

“When we're playing with a lot of good teams, the margin of error in those things is small," Frost said. “We have to avoid those things, but the guys are playing well. We can still get a lot done.”

The Gophers (3-2, 1-1) rank ninth in the conference in points per game and 12th in yards per game and must clear another hurdle with the loss of tailback Trey Potts to a serious, undisclosed injury for the remainder of the year that occurred on Oct. 3 late in a victory at Purdue. Potts was second in line to Mo Ibrahim, who is also done for the season after hurting his lower leg in the opener.

Freshmen Mar'Keise Irving and Ky Thomas are next in line. Irving, whose nickname “Bucky” has morphed into “Bucko” to avoid association with rival Wisconsin's mascot, had 15 carries for 89 yards last month in a blowout win at Colorado. Thomas had seven rushes for 66 yards in that game.

“Everybody’s like, ‘Well, what are you going to do now?’ Well, that’s why Bucko is here, and that’s why Ky Thomas came here, to eventually be the guy.”

Martinez has lost 18 fumbles in 34 career starts, and many of them have occurred at the worst possible times. Even before the Michigan game, he lost one against Michigan State that killed a fourth-quarter drive. There was another right before halftime against Illinois that was returned for a touchdown to put the Huskers behind for good in that game.

The Huskers have lost six of the last seven games in which Martinez fumbled. He’s 4-11 as a starter when he has fumbled at least once and 10-9 when he doesn’t.

The special teams for Minnesota have been much improved this year, and punter Mark Crawford was the latest to stand out against Purdue by dropping four of his six kicks inside the 15-yard line including one at the 2. The native of Perth, Australia, had a pair of 60-yard punts, his career long.

“When you’re talking about how you go win football games, you better know — as a head coach and better know as a staff and as a team — how we’re going to continue to go do that even without your best players,” Fleck said.

Just as importantly, Crawford was the holder on four successful kicks in the heavy rain — two extra points and two field goals by Matthew Trickett that helped the Gophers to a 20-13 victory.

Two players on Nebraska's offense who grew up in Twin Cities suburbs could play significant roles, and both are highly motivated. Bryce Benhart will move back into the starting lineup at right tackle because of a season-ending injury to Teddy Prochazka, and Levi Falck is listed as a co-starter at one of the wide receiver spots.

Falck, who transferred from South Dakota last year and started four games, has nine catches for 119 yards and a touchdown. He said Minnesota showed interest in him for baseball but not football.

Apparently neither does Benhart, who got a scholarship offer from Minnesota but never visited.

“We always talk about how we don’t like Minnesota and we’ve got beat them this week,” Falck said. “He’s fired up just to be starting and even more fired up to get a chance to beat our hometown.”