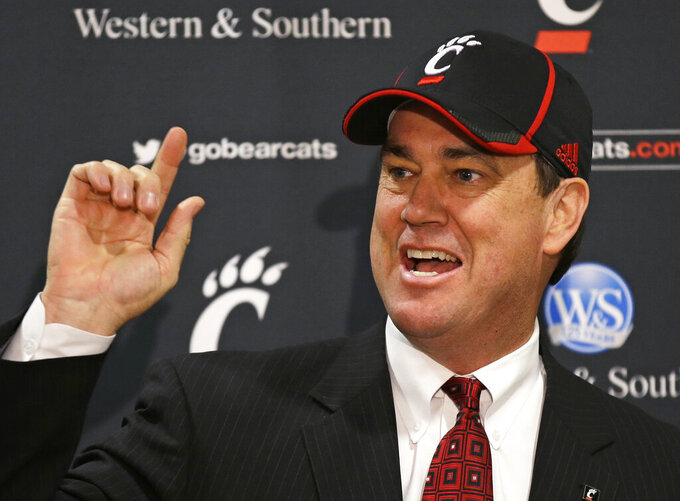 FILE - In this Feb. 6, 2014, file photo, Mike Bohn speaks at a news conference after he was named Cincinnati athletic director, in Cincinnati. Southern California has hired veteran collegiate sports administrator Mike Bohn as its new athletic director. USC announced the hiring Thursday, Nov. 7, 2019, nearly two months after Lynn Swann abruptly resigned. Bohn has spent the past five years as the athletic director at the University of Cincinnati. He also has been the AD at Colorado, San Diego State and Idaho. (AP Photo/Al Behrman, File)

LOS ANGELES (AP) — Southern California hired Mike Bohn as its new athletic director on Thursday, breaking from tradition to turn over the program to a veteran collegiate sports administrator with no ties to the school.

USC President Carol Folt announced the hiring nearly two months after Lynn Swann abruptly resigned. Folt took over in July, and Bohn is the latest change atop the structure of an insular program beset by scandal and underperformance in recent years.

"I will work tirelessly and relentlessly to make the Trojan Family proud," Bohn said during his introductory news conference. "We are going to build the championship program that you deserve."

The 58-year-old Bohn has spent the past five years as the athletic director at the University of Cincinnati. He also has been the AD at Colorado, San Diego State and Idaho during a 35-year career in administration that began at the Air Force Academy.

Bohn is USC's first AD since 1993 who was not a former USC football player with no prior experience working in athletic administration. The Trojans' past three athletic directors — Mike Garrett, Pat Haden and Swann — all left with the department in turmoil.

"I believe I bring in a new perspective," Bohn said. "Maybe something just a little bit different. But I want to make sure you understand I have tremendous respect for the traditions, the history, the success and what USC athletics stands for. As a competitor, that's why I want to be here."

USC was embroiled in the widespread college admissions scandal and the college basketball corruption scandal in recent years. The school's clubby atmosphere has been changed by the arrivals of Folt and Bohn, and more change could be on the way at the department's highest-profile program.

Bohn said he has not met embattled football coach Clay Helton, whose team is 5-4 in his fourth full season in charge. Helton has a contract through 2023, but is thought to be on a hot seat after his Trojans finished last season with their first losing record since 2000, followed by their mediocre current campaign.

Bohn declined to say whether a coaching change was part of his mandate in getting the job. Many USC alumni have been clamoring for the school to make a run at three-time national champion coach Urban Meyer, who left Ohio State in January after beginning last season on administrative leave for his handling of spousal abuse allegations against assistant coach Zach Smith.

"We all understand the importance of football," Bohn said. "It's very similar to every institution that I've been a part of. We expect all of our programs to compete, and that's one of the attractions of coming and working with Dr. Folt. It would be premature to be talking about coaches or any situation when I've just arrived and in the process of learning."

The USC football program has spent the past decade failing to recapture its 2000s success under Garrett and coach Pete Carroll. Former Carroll assistants Lane Kiffin and Steve Sarkisian were both fired, while Helton has hung on much longer than almost anyone expected when the career assistant coach was promoted by Haden to replace Sarkisian in 2015.

Helton has run a clean program and restored respectability to a school buffeted by NCAA sanctions and misbehavior under its previous coaches. He even won a Rose Bowl and a Pac-12 title during Jets quarterback Sam Darnold's two seasons as starter, but Helton is 17-17 without Darnold in his lineup.

When asked what he expected from the football team's final three games of the current regular season, Bohn said: "I mentioned Fight On, but it's also Fight On to Victory. I'm not trying to add any more pressure to (Helton) or our student-athletes, but we always want to finish strong."

Bohn has a mixed record of hiring football coaches. He made three hires at Colorado, but Dan Hawkins and Jon Embree both struggled, while Mike MacIntyre enjoyed minor success that came after Bohn was fired by the Buffaloes in 2013.

But Bohn's choice of Fickell at Cincinnati has been widely praised. Fickell's Bearcats went 11-2 last season, and they are 7-1 this year.

USC also is at the beginning of an important season for men's basketball coach Andy Enfield, who has won just one NCAA Tournament game in six seasons in charge. The Trojans didn't make the past two tournaments and have finished higher than fifth in the Pac-12 just once, but Enfield's current team is loaded with talent.

Dave Roberts had been USC's interim AD since Swann quit in September.

Bohn is a graduate of the University of Kansas, where he played baseball.