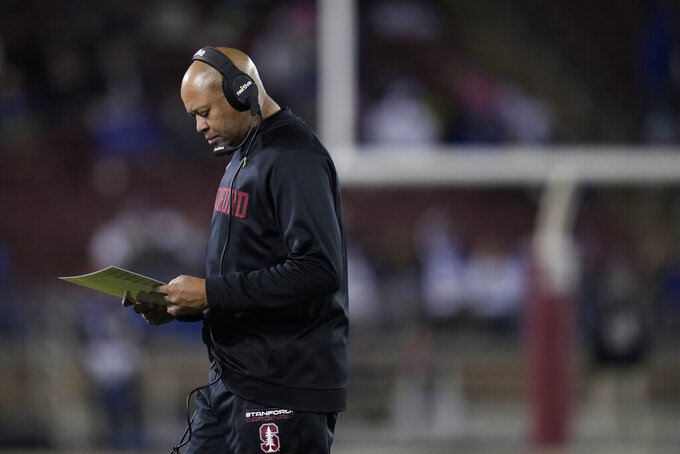 Stanford head coach David Shaw stands near the sideline during the second half of an NCAA college football game against BYU in Stanford, Calif., Saturday, Nov. 26, 2022. (AP Photo/Godofredo A. Vásquez)

STANFORD, Calif. (AP) — Stanford coach David Shaw resigned Saturday night after finishing his 12th season at his alma mater with a 36-25 loss to BYU that dropped the Cardinal to 3-9.

Shaw, 50, led Stanford to five double-digit win seasons, with three Pac-12 titles and Rose Bowl appearances in his first six years as head coach. He finished with more wins than any coach in program history with a 96-54 record, and was considered one of the most respected coaches in the country.

Shaw arrived unusually late to his postgame news conference and said his decision only came in the last few days.

“A week ago, 10 days ago, I was gung-ho to be the person to lead us there, and over the last few days I realized it was time,” Shaw said. “It was time for me to step aside, time for the next group to come in, and hopefully whoever they hire next wins more games than I do. That would be awesome."

The falloff in recent years has been drastic. The Cardinal are 14-28 over the last four seasons as the program has struggled to keep up in a rapidly changing college football landscape with players transferring more freely and earning money for name, image and likeness.

Stanford is 3-16 in Pac-12 play the past two seasons, including consecutive losses to rival California.

“There are a lot of people that think this program is down. That’s what our record says,” Shaw said. “But I look at the components. I look at the people here, the support that I’m hearing coming from our athletic director, from our university president, the people that are behind the scenes. We’re not that far away.”

Shaw, a California native who played receiver for Stanford in the early 1990s, replaced Jim Harbaugh as head coach in 2011. He had been offensive coordinator for Harbaugh from 2007-10.

Shaw spent nine seasons as an NFL assistant before joining Harbaugh's staff at the University of San Diego and then following him to Stanford.

“David has represented Stanford football, as both a player and a coach, with unwavering grace, humility and integrity,” athletic director Bernard Muir said. “He has cared tremendously for each and every student-athlete in his program, while helping them pursue their full academic and athletic potential. David will forever remain a valued member of the Stanford football family and an integral part of the storied history of the program.”

Shaw was part of a remarkable program turnaround under Harbaugh and then under his leadership Stanford became the premier program in the Pac-12 with a physical style dubbed Intellectual Brutality.

As the program declined, Shaw has remained steadfastly loyal to his assistant coaches. The staff has had few changes lately, with Shaw repeatedly saying he felt firing assistants was pushing the blame for the team's failures from himself to others.

Stanford is a private school that does not disclose contract terms with its coaches so it is unclear how many years Shaw had left on his deal.

He said he had no plans to pursue another job.

“I’m not burnt out by any stretch of the imagination,” he said. “I’m healthy and feel good. But at the same time, 16 years is a long time — 12 as a head coach, 16 here. I’m so proud of our accomplishments, so proud of our student-athletes, so proud of the guys that have gone on and done other things in the NFL and outside of the NFL in different walks of life. But like I said, the phrase just kept coming back to me that gave me peace, which was, ‘it’s time.’”