STAT WATCH: Air Force TD was longest run by a QB since 2003 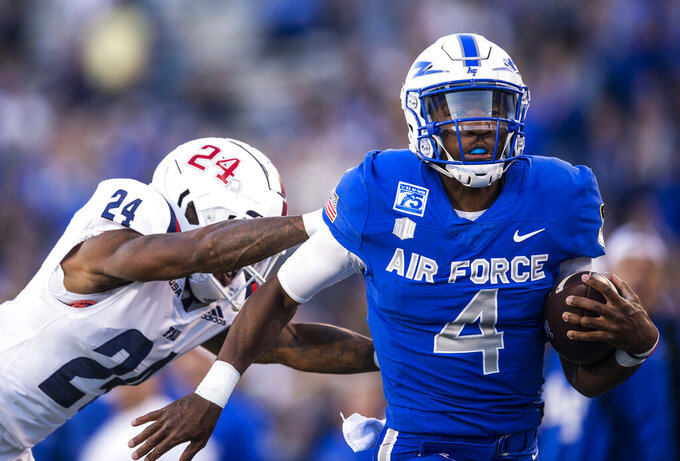 Air Force's Haaziq Daniels didn't just break the longest run of the weekend when he went 94 yards for a touchdown against Florida Atlantic.

It was the longest by a Football Bowl Subdivision quarterback in 18 years.

Daniels' big run was the second of his two touchdowns in a 31-7 win and the longest in program history, breaking the 50-year-old record of 88 yards by Joel Carlson against Army.

The last quarterback to run so far was Rice's Kyle Herm, who went 95 yards against Nevada in 2003.

Army quarterback Christian Anderson had the best rushing performance of the week, running for a career-high 236 yards on 15 carries against Miami (Ohio).

Northwestern’s Evan Hull had the only other 200-yard game, carrying 22 times for 216 against Ohio. Hull’s 90-yard TD run was Northwestern’s longest since Bill Swingle went 95 yards against Boston College in 1961.

He is among four players in program history to accomplish the feat, a list that includes Davante Adams, now with the Green Bay Packers.

Cropper has a TD in six straight games, the first Fresno State player to do it since Adams scored in nine games in a row over the 2012-13 seasons.

Delivering the ball to Cropper was Jake Haener, whose five TD passes against UNLV were most in a game by a Bulldogs player since Derek Carr did it in 2013.

Sincere McCormick's 42 carries for UTSA against Memphis were the most in five years by a player not in a triple-option offense.

McCormick ran for 184 yards and three touchdowns and caught three balls for 33 yards in the Roadrunners' 31-28 come-from-behind win. It was his third 100-yard game of the season and program-best 13th of his career.

Air Force's Isaiah Sanders and Georgia Tech's Taquon Marshall each carried 44 times in a game in 2017, but they played in option offenses in which passes were rare.

Take those two players out of the equation, and McCormick's number of carries was the highest since D’Onta Foreman of Texas ran 51 times against Kansas in 2016.

He ran back the opening kickoff against Southern Mississippi 100 yards, and he returned a fourth-quarter kick 83 yards. Williams also had an 81-yard touchdown reception and finished with 258 all-purpose yards.

Samford's Liam Welch threw for 582 yards and had 655 yards of total offense against East Tennessee State, the highest totals in the Championship Subdivision in eight years.

The last FCS player to put up those kinds of numbers was Stephen F. Austin's Brady Attaway, who threw for 662 yards and, with minus-7 yards rushing, had 655 in total offense against Prairie View in 2013.