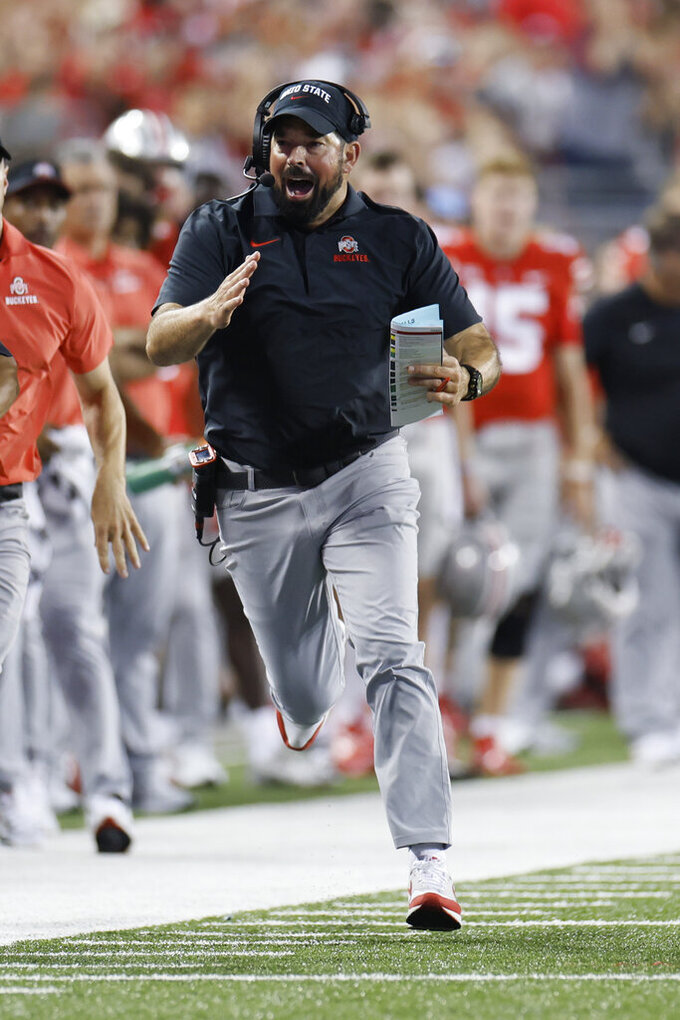 Ohio State coach Ryan Day runs toward an official to call a timeout during the second half of the team's NCAA college football game against Toledo on Saturday, Sept. 17, 2022, in Columbus, Ohio. (AP Photo/Jay LaPrete) 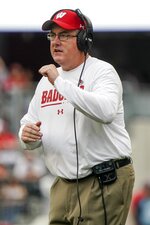 Line: Ohio State by 18 1/2, according to FanDuel Sportsbook.

Wisconsin dropped out of the AP Top 25 after being beaten in Week 2 by heavy underdog Washington State. The Badgers rebounded last week to crush New Mexico State. Ohio State's offense is hitting its stride, rolling up 763 yards — second most in school history — in a 77-21 rout of Toledo last week. Ohio State coach Ryan Day had talked to his team about the importance of a dominating performance before the Buckeyes head into the Big Ten schedule, and that's what happened.

Ohio State’s passing game against Wisconsin’s defense. The Buckeyes scored almost at will against Toledo. C.J. Stroud was very accurate in throwing for 367 yards and five touchdowns. Three players racked up over 100 receiving yards. That happened for only the second time in school history.

Wisconsin: Despite the Week 2 loss, quarterback Graham Mertz has looked good. He's completed 71% of his passes, throwing for nearly 700 yards with six touchdowns and two interceptions in the first three games.

Ohio State: WR Marvin Harrison Jr. is emerging as one of the team's best receivers. He had six catches for 102 yards and two touchdowns last week and has 342 yards and five TDs in three games.

Ohio State running back TreVeyon Henderson is expected to play after leaving last week’s game with an unspecified injury. ... Ohio State has won eight straight games over Wisconsin, including a 38-7 victory at Ohio Stadium in 2019 and a 34-21 win in the 2019 Big Ten championship game. ... Wisconsin's last win at Ohio Stadium was 2004 when the Badgers prevailed 24-13. ... Stroud is second in the nation in pass efficiency with a rating of 208.6. ... Mertz has played his best football as a Badger in the first three games, ranking fifth in the country in pass efficiency. ... The Buckeyes will wear all black uniforms — including helmets — for the game under the lights. ... Ohio State scored touchdowns on each of its first seven drives last week.