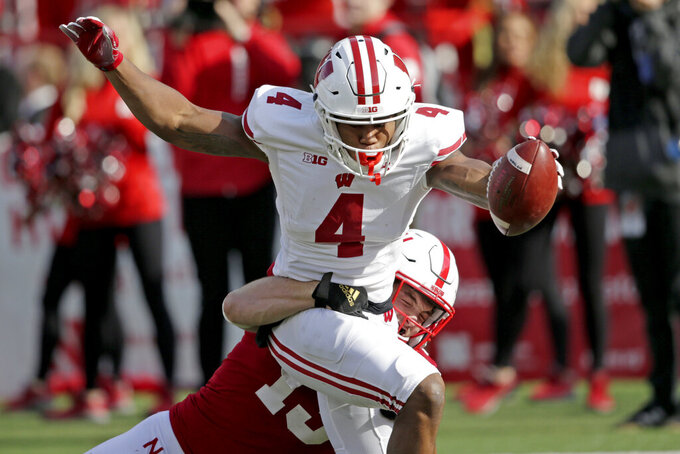 The Wisconsin star ran for 204 yards and two touchdowns in the No. 15 Badgers’ 37-21 win on Saturday in a performance that further etched his name into the record books.

Taylor became the first Football Bowl Subdivision player since at least 2000 to run for 200 yards three times against the same team, according to Sportradar. He recorded his 11th 200-yard game, moving into a four-way tie for most in a career by an FBS player. And now with 5,634 career yards, Taylor moved past Georgia’s Herschel Walker (1980-82) into first place for most yards rushing through a junior season.

“I’m a big fan of him, right?” Wisconsin coach Paul Chryst said with a smile. “Who he is and how he goes about this is the thing that you appreciate the most. It is hard to run the ball, and to do what he's been doing, and he'd be the first one to say, it takes everyone. I feel blessed, being able to be around him. And the best part is we’ve still got more games to play. He is truly special, and in so many ways.”

Taylor had 221 yards against the Cornhuskers last year and 249 in 2017. Taylor averaged 8.2 yards on his 25 carries, often dragging defenders for extra yards. He had his third 200-yard game of the season against a Nebraska defense that was missing starting linemen Darrion Daniels and Carlos Davis.

“You can't really come with the same scheme on offense each and every single year,” Taylor said, “so (coaches) always do a good job just putting little wrinkles in for this game in order to keep Nebraska on their toes and make it so they don't know really what's coming all the time.”

The Badgers (8-2, 5-2 Big Ten, No. 14 CFP) quickly erased a 14-10 deficit in the second quarter. Jack Coan threw over the middle to A.J. Taylor, who spun away from two defenders and ran the rest of the way untouched for a 55-yard touchdown. Wisconsin linebacker Jack Sanborn intercepted a tipped ball on the first play of Nebraska’s next series, and Jonathan Taylor ran in from the 1 to finish a short drive that put the Badgers ahead 24-14.

“I’m tired of looking for silver linings,” Nebraska coach Scott Frost said. “This team has to decide it’s going to do whatever it takes to change it, and we had opportunities today.”

Early on it looked like Jonathan Taylor might be outplayed by Nebraska’s Dedrick Mills. The junior college transfer who spent his freshman year at Georgia Tech ran for a career-high 188 yards and a touchdown.

“I thought the staff did a good job coming up with a plan to give us a chance with a limited number of snaps,” Frost said. “We put him in stuff he was a little more comfortable with, and he got more chances today.”

Before the game, Nebraska announced Frost was given a two-year contract extension through 2026. The Huskers are 8-14 under Frost since he left Central Florida to return to his alma mater. Frost said chancellor Ronnie Green suggested the extension.

“This is where I want to be,” Frost said. “People in Nebraska know me pretty well. I’m a fighter and I’m not going to quit until we get this right. We took the Nebraska job as a staff because we figured we would have the runway to build this and build this the right way. There was more work than we anticipated before we came to Lincoln, and there still are things we need to do. We’re going to get this done.”

Wisconsin’s workmanlike performance won’t hurt it, and the Badgers might move up depending on how teams ahead of them do.