Temple's goal-line stands clutch in win over No. 21 Maryland 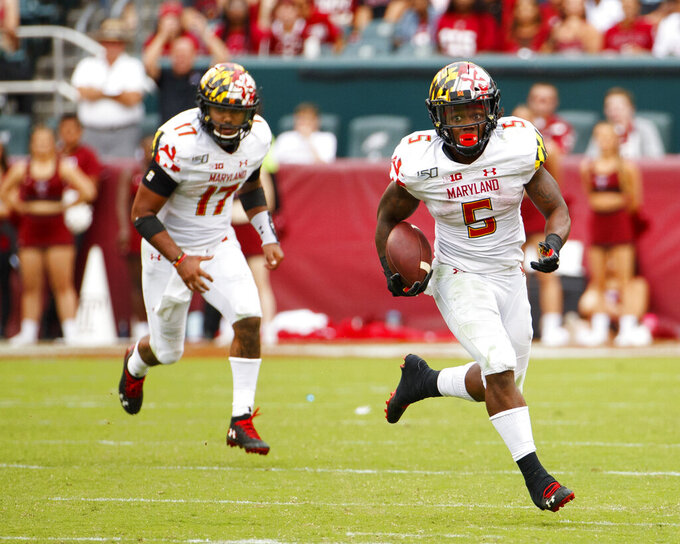 Maryland running back Anthony McFarland Jr. (5) runs with the ball during the second half of an NCAA college football against Temple, Saturday, Sept. 14, 2019, in Philadelphia. Temple won 20-17. (AP Photo/Chris Szagola) 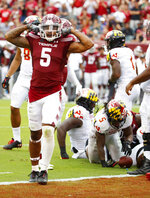 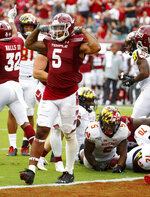 PHILADELPHIA (AP) — Anthony McFarland was already stuffed at the goal line once by Temple. With the Maryland running back needing inches again to put the Terps ahead, he should have known what was coming.

Shaun Bradley wrapped up McFarland in the backfield for one more clutch hit for Temple's defense. Bradley flexed his muscles, pounded his chest and let loose toward Temple fans howling in delight.

"It was the best feeling ever, man," Bradley said.

Kenny Yeboah had put Temple ahead on a one-handed touchdown catch late in the fourth quarter, and the Owls used two stops at the goal line — Bradley's was one of them — to hold off No. 21 Maryland 20-17 on Saturday.

The Owls (2-0) defeated an unbeaten Maryland team for the second straight season and got coach Rod Carey off to a nice start in his first season on Temple's sideline.

"Everything you're supposed to do to lose a game, we did," Carey said, "yet, we still executed well enough to overcome that."

Minus awful special teams, the Owls were nearly flawless in the fourth quarter.

Yeboah used his outstretched right hand to snag Anthony Russo's pass with 7:27 left in the game to put Temple ahead 20-15, but Maryland wasn't going down easy — and Temple's D pushed back.

The game program cover boy, Bradley stopped McFarland on fourth-and-goal with 3:27 left to seemingly seal the win. But Temple got the ball back and Adam Barry shanked a punt from the end zone to give Maryland first-and-goal at the 10.

Again, the Owls held the Terrapins, and a fourth-down pass was incomplete with 2:14 to go to complete the upset.

Russo's intentional safety finished off the scoring and completed the win for the seven-point underdogs.

Russo threw for 277 yards and three touchdowns for the Owls. McFarland ran for 132 yards and Josh Jackson threw for 183 yards and was sacked four times for the Terps.

"I'm disappointed in our ability to run the ball inside the goal line area," Maryland coach Michael Locksley said. "Any team that I coach, we're going to be a team that has to have the ability to punch it in."

The Terps (2-1), who had opened with two straight blowout wins, made a series of plays in the third quarter to shake out of a road malaise.

McFarland, who had four touchdowns rushing in his first two games, gave Maryland a 9-7 lead when he scored on a 4-yard run early in the third. That got a rise out of thousands of Maryland fans who had made the 130-mile trek north to watch the Terps try to stay unbeaten.

Then, Jackson hit Tyler Mabry with a 17-yard pass to put Maryland ahead 15-13 — the 2-point conversion was missed.

Temple had its supporters, too, at the home of the Philadelphia Eagles, and the announced crowd of 30,610 wasn't far off the actual mark. It was the biggest home game of the season and the parking lots were stuffed with tailgating fans hungry for a win.

Russo hit Jadan Blue in stride for a 79-yard touchdown in the third quarter for a 13-9 lead, and that gave those Temple fans hope another upset was on the horizon.

"There was a lot of hype around this game," Bradley said. "I don't talk too much on Twitter about it. But I see it. 'Maryland was going to do this. How's Temple going to stop this?'"

Bradley and the rest of Temple's defense had all the answers.

Maryland flashed one of the more dominant offenses in the nation in the first two games, rolling to a 79-0 win over Howard and 63-20 victory over then-No. 21 Syracuse. The Terps averaged 335.5 yards rushing, the fourth-best average in the country and were best among Big Ten teams.

The Terps' offense dragged in Philadelphia.

Maryland had just 79 yards rushing and two first downs in the first half, its lone score came on a safety. Jackson was sacked three times, McFarland was stuffed on fourth-and-goal and Joseph Petrino was wide left on a 42-yard attempt. Maryland even botched a fake field-goal attempt in the second quarter, and suddenly the Terps seemed to be spiraling toward another upset loss to the Owls.

Temple has been to four straight bowl games with three coaches and Carey could be the latest one to keep the run going.

Maryland has a week off before Penn State on Sept. 27. "The way we played, the bye couldn't come at a better time," Locksley said.