Texas Tech visits No. 25 K-State as both come off big wins 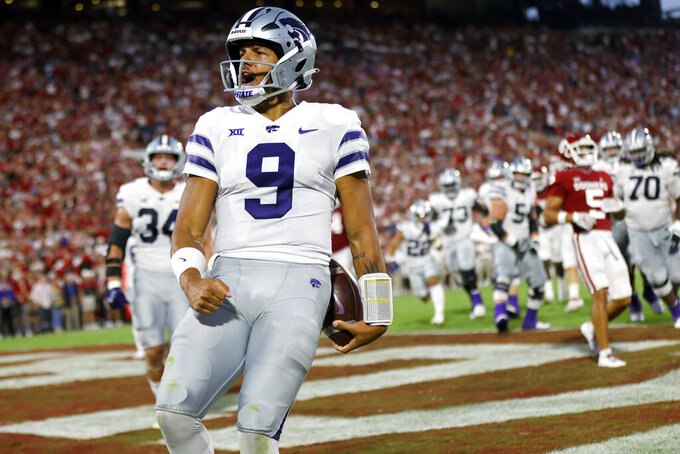 Kansas State quarterback Adrian Martinez celebrates after a touchdown against Oklahoma during the first half of an NCAA college football game Saturday, Sept. 24, 2022, in Norman, Okla. (AP Photo/Nate Billings) 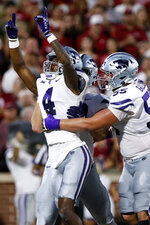 There was a common conversation this week within the walls of the Football Training Facility at Texas Tech and the Vanier Family Football Complex adjacent to Bill Snyder Family Stadium at Kansas State.

How to deal with success.

In a cheeky opening week of conference play in the Big 12, both schools dealt soon-to-be SEC defectors a loss. The Red Raiders rallied past then-No. 22 Texas in overtime during the afternoon slate of games, then the Wildcats sent a shock through college football when they walked into then-No. 6 Oklahoma and pranced out with a 41-34 victory.

“We met yesterday and that was the first thing we talked about,” said Red Raiders coach Joey McGuire, whose team visits No. 25 Kansas State on Saturday. "I was Googling all these sports quotes and guess what? They're all about failure. Anyone who said anything, from Michael Jordan to Kobe Bryant, it's all about how you handle failure. It's not success.

“So we talked about that,” McGuire continued, “and how everyone is patting you on the back and saying, ‘Great job.’ And then we talked about how you want to be remembered. It's not for beating Texas.”

Or in the Wildcats' case, it's not for beating Oklahoma.

That's because eitherTexas Tech (3-1) or Kansas State (3-1) will be 2-0 in league play after Saturday, and the winner will have a big step up in the race for a spot in the Big 12 championship game. And that's ultimately the goal for both programs, one from Lubbock that has never won the conference crown, and one from Manhattan that hasn't done it in a decade.

“You try to enjoy that win last week,” said Wildcats quarterback Adrian Martinez, the unquestioned star of their upset in Norman. “But playing in the Big 12, playing against a really good opponent this week, you have to reset. If we're not ready, they're going to beat us. Anybody can beat anybody on any given Saturday.”

The Wildcats know that perhaps better than anyone. They lost to Tulane the week before beating the Sooners.

“We definitely had a chip in our shoulder. Definitely had something to prove,” Kansas State fullback Ben Sinnott said. “I'm proud we took advantage of that opportunity. Now we have to do it again.”

Kansas State has won six straight and 10 of the last 11 against Texas Tech, including a razor-thin 25-24 victory last season in Lubbock. The Red Raiders haven't won in Manhattan since 2008, when Mike Leach was still on the sideline.

“It's my favorite place to play on the road,” said McGuire, who spent the past five years as an assistant at Baylor. “They have great fans, and it's a true college atmosphere you're going into. It's going to be a lot of fun.”

RUNNING AGAINST A WALL

Wildcats running back Deuce Vaughn got back on track against Oklahoma, running 25 times for 116 yards to maintain his Big 12 lead in rushing. As a whole, the Wildcats are rolling up 248.2 yards per game, the seventh-best run total in the nation. But they'll be tested by a tough Texas Tech defensive front that has surrendered just 399 yards rushing through its first four games, the second-lowest total by a Red Raiders defense since 2000.

Red Raiders quarterback Donovan Smith is the league's leading passer with 1,117 yards and nine touchdowns, and he's coming off a big game against Texas in which he threw for 331 yards and two scores. But he's not the prototypical Air Raid quarterback of yesteryear in Lubbock. Smith showed some running ability last week with 15 carries for 42 yards.

Kansas State is plus-6 in turnover margin through its first four games, picking off seven passes and recovering a fumble, and its ability to maintain possession was a big factor in the win over Oklahoma. Both teams were turnover-free, but the Wildcats did stop the Sooners on a fourth-down conversion attempt.

Along with beating Texas when it was ranked, the Red Raiders also beat then-No. 25 Houston and played No. 10 North Carolina State tough on the road in its only loss. This will be the first time they have started a season with four of the first five games against Top 25 teams, and the first four-game stretch against ranked opponents since 2012.

“That was a huge win for Joey (last week),” Kansas State coach Chris Klieman said. “Got a signature win right away.”