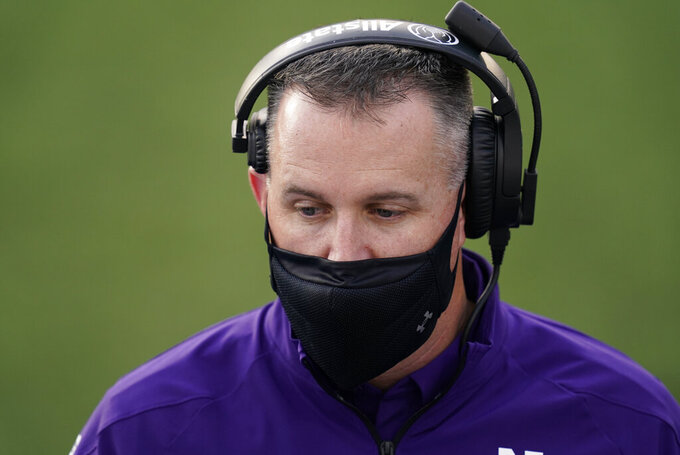 On the 25th anniversary of Northwestern's run to the Rose Bowl, Pat Fitzgerald is working on another remarkable story at his alma mater.

This one is still in progress, however.

“We’ve got a bunch of chapters left to write on this group before I’m ready to kind of look and give an overview of it," Fitzgerald said this week, demurring slightly before answering a question comparing his 2020 defense to Northwestern's 1995 group.

If the 11th-ranked Wildcats win this weekend at Michigan State, there may be no denying that something special is happening at Northwestern. Fitzgerald's team is undefeated and atop the Big Ten West. Second-place Wisconsin might not play enough games to be eligible for the conference title game, and one more Northwestern victory would eliminate everyone else in the division.

The Wildcats (5-0, 5-0) are No. 8 in the College Football Playoff rankings, and they've done plenty to earn that status so far. Northwestern is actually No. 1 in ESPN's Strength of Record metric, which compares teams to how an average top-25 team would be expected to perform against that particular schedule.

“I think we’re playing really confident, and I don’t think that’s been there necessarily in the past few years," receiver Kyric McGowan said. "The confidence and the trust that we have right now has us executing and playing very efficient.”

One area of strength for the Wildcats this season has been avoiding the coronavirus.

“As we started training camp to today, knock on wood, we have not had a positive COVID test in our entire football program," Fitzgerald said Monday. "I think that credit first and foremost starts with the players.”

Now in his 15th season as Northwestern's coach, Fitzgerald is familiar with the ups and downs of coaching this particular program. The Wildcats went 8-1 in conference play in 2018 and reached the Big Ten championship game, then they collapsed to 1-8 last season. They're known for playing tight games — since Fitzgerald took over, they've won 48 one-possession games, tied with Navy for the most in the FBS.

Three of Northwestern's victories this season have been by eight points or fewer, and the Wildcats have not allowed more than 20 points in any game. Only one opponent has scored on Northwestern in the second half.

That's what can lead to comparisons between this defense and the 1995 version — for which Fitzgerald played.

“There's similarities in the preparation,” he said. "This group really takes the time at all three levels to truly get themselves mentally, physically and emotionally prepared to go compete."

Michigan State (1-3, 1-3) is in a bit of a rebuilding mode this year, and the last two games on Northwestern's regular-season schedule — against Minnesota and Illinois — are against teams with losing records. There's no question the Wildcats are in a commanding position at the moment.

“I don't think that we've become complacent at all. I think we've acknowledged where we're at as a program and where we've come from and where we're heading,” linebacker Paddy Fisher said. "We've still got everything out in front of us, and it's there for us to take. If we want it, let's go do it and let's go get it."

Michigan State did not play last weekend because its game against Maryland was canceled. The Spartans' previous two games were lopsided losses to Iowa and Indiana.

Graduate transfer Peyton Ramsey came to Northwestern from Indiana and has completed 62% of his passes this season. He's thrown eight touchdown passes in five games.

Michigan State, on the other hand, has questions at quarterback. Rocky Lombardi has been the starter, but he was replaced by Payton Thorne during the team's most recent game.

This is Northwestern's highest AP ranking since 1996 and its first 5-0 start in Big Ten play since '96.

When Michigan State coach Mel Tucker looks at Northwestern, he sees a team loaded with experienced players in key spots.