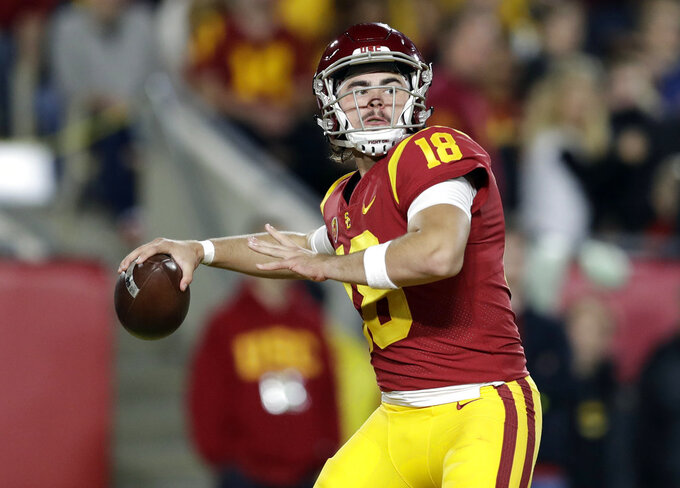 Southern California quarterback JT Daniels throws a pass during the first half of an NCAA college football game against Colorado on Saturday, Oct. 13, 2018, in Los Angeles. (AP Photo/Marcio Jose Sanchez)

But the Trojans need to do more than establish equilibrium between the run and pass, as inconsistency in generating scoring drives is also a problem headed into their crucial Pac-12 South showdown at Utah on Saturday night.

In a 31-20 win over Colorado, USC (4-2, 2-1 Pac-12) relied on a dominant passing attack in the second quarter, with freshman quarterback JT Daniels completing 10 of 16 passes for 212 yards and three touchdowns. USC gained 71 yards passing and 63 yards rushing during the other three quarters, averaging a meager 3.35 yards per play.

"On the touchdown-scoring drives we got out of our own way. Later on in the game, whether it was holding penalties, infractions, a negative play on first down in the run game, those were the plays that ended up making third downs really, really hard," offensive coordinator Tee Martin said. "We just got to get out of our own way and stop the drive-killing plays, whether it is on first or second down that gets us to where we're punting the ball instead of sustaining drives."

Those struggles are reflected in the distribution of when USC scores this season, as nine of 24 quarters have seen the defending Pac-12 champions produce two or more possessions that end in points. USC has also had nine scoreless quarters, with seven coming in road games at Stanford, No. 7 Texas and Arizona.

However, Daniels seemed comfortable with the idea of a one-dimensional offense and cited the second quarter as a template for what USC is capable of.

The freshman was effective in finding wide receivers Tyler Vaughns and Michael Pittman Jr. down the field, something they had struggled with earlier this season.

"We have the receivers for it and we have the scheme for it," Daniels said. "And a lot of completions that weren't deep balls were check downs on deep ball plays. Really, that's how it should work."

Martin was impressed with how Daniels was able to stay aggressive after throwing two interceptions in the first quarter, one on the first play of the game after failing to spot Buffaloes linebacker Drew Lewis in coverage. In spite of those turnovers, Martin did not feel the need to change the game plan or even call Daniels on the sideline from the press box to calm him down.

"I'll give him an A, though, for the way he responded to that," Martin said. "Sometimes when you're that young you can't overcome early mistakes. The part I commend him the most on was he went out and played like nothing had ever happened and started making huge plays later on that helped us win the game in the passing game."

It was needed to offset struggles running the ball, which came after USC rushed for 253 net yards at Arizona in their previous game. Helton wasn't unduly concerned, pointing to Colorado's focus on stopping the ground game, a lack of possessions for the offense in the second half, and a concerted effort to close out the game after building a three-touchdown lead.

Helton sees the flexibility to go from relying on the stable of running backs one week to Daniels' arm the next as a positive, but he is still looking for both aspects to deliver at the same time over the course of a game.

"Each game feels different, just being honest," Helton said. "We go into Arizona and we rush for 270 yards, and then we go into the next game and we're launching balls deep. The one thing I will credit to Tee for is he's really trying to take what the defense gives him."

NOTES: LB Cam Smith (hamstring) did not practice. Helton was upbeat about the senior's availability at Utah after Smith did not play against Colorado. "I think it was right on the cusp last week, and it was something that for the long run we wanted to give it another week," Helton said.