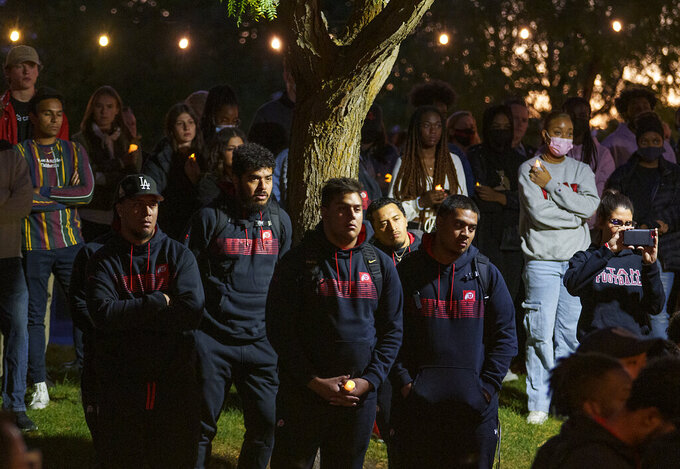 Members of the University of Utah football team mourn the loss of fellow student-athlete Aaron Lowe during a candlelight vigil on the southwest lawn of the university's student union, Wednesday, Sept. 29, 2021, in Salt Lake City. Lowe was fatally shot at a house party early Sunday, Sept. 26. (Leah Hogsten/The Salt Lake Tribune via AP)

SALT LAKE CITY (AP) — Utah players and coaches returned to practice Monday grieving one of their own who was killed in a shooting at a postgame party.

The team was on the field for the first time since sophomore defensive back Aaron Lowe was shot on Sept. 26, just nine months after Lowe’s friend and teammate, running back Ty Jordan, died in an accidental shooting. The team was on a previously scheduled bye last week.

“We miss Aaron,” said coach Kyle Whittingham, who was noticeably teary-eyed. “Senseless loss. For our team to experience the loss we have in less than a year’s time — with Ty and Aaron — has been a challenge.”

Salt Lake City police on Sunday arrested 22-year-old Buk M. Buk in the shooting and booked him on charges of aggravated murder, attempted murder and felony discharge of a firearm. Online jail records do not indicate if he has an attorney who can speak on his behalf.

Police Chief Mike Brown did not discuss a motive and declined to answer questions from reporters. But he did say the shooting was not a targeted attack on the university, its athletic department or Lowe, nor was it gang-related.

Whittingham said he learned about Lowe’s death hours after the shooting. The Utes held a pair of team meetings later that day. Team counselors and psychologists were made available to talk with shaken players.

“It’s tough,” Whittingham said. “There’s nothing that is anything but a huge challenge in a situation like this.”

He characterized this as the most challenging year of his coaching career, working to shepherd his players, fellow coaches, and himself through the tragic events.

“When you’re a head coach, you got 120 players and you treat them all and feel about them all like you do your own children,” Whittingham said. “So, it’s like losing one of your own.”

A small memorial to Lowe has been set up outside the main doors of the Spence and Cleone Eccles Football Center. Signs with messages like “Forever 22” and “Rest in Love, A Lowe” were propped up near one door, surrounded by bouquets of flowers and candles.

The team plans to officially memorialize Lowe in other ways. His locker will continue to bear his name and jersey, as the Utes did with Jordan earlier this year. Whittingham said he also wants to work with the school to permanently retire No. 22 in honor of the two players.

Jordan wore No. 22 during his freshman season with the Utes. Lowe switched to the same number before the 2021 season to honor his friend. Lowe had also become the first-ever recipient of the Ty Jordan Memorial Scholarship in August.

“You won’t see anyone wearing No. 22 in this program again, at least as long as I’m the head coach,” Whittingham said. “We’d like to see that retired permanently. That’s our wish and I think you’ll see that happen.”

The Utes are scheduled to play their first game since Lowe’s death at Southern California on Saturday. Whittingham said none of the players have opted out.