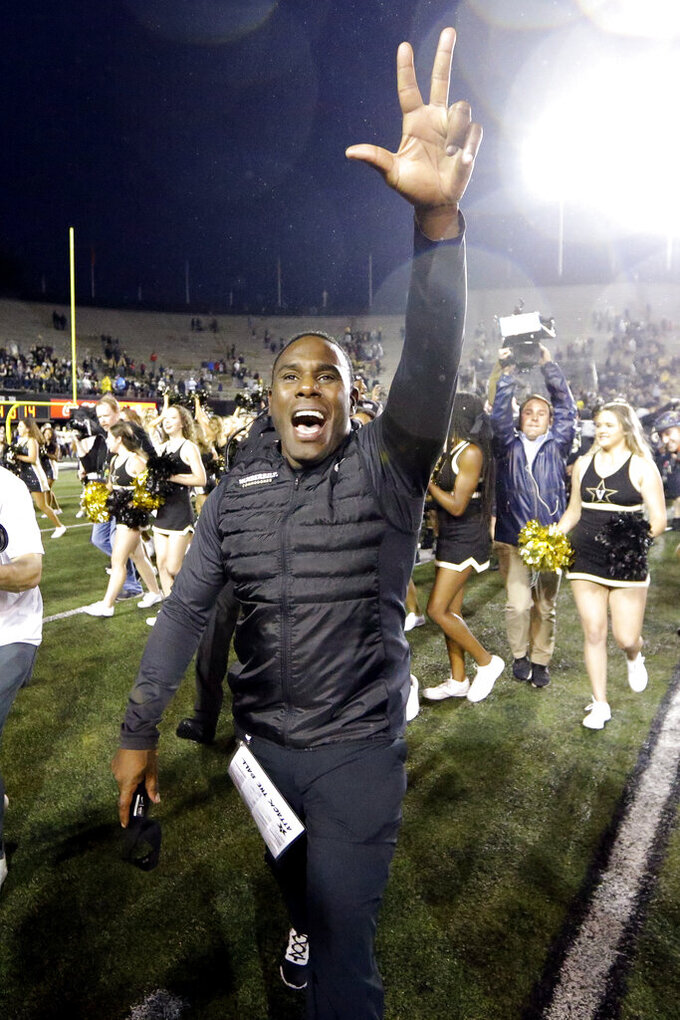 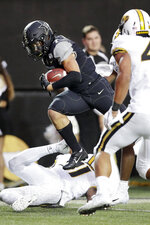 Riley Neal came off the bench and threw a 21-yard touchdown to Cam Johnson with 8:57 left, and Vanderbilt upset No. 22 Missouri 21-14 on Saturday with a stifling defensive performance.

Ke'Shawn Vaughn ran for a touchdown and also took a screen 61 yards for another score as Vanderbilt (2-5, 1-3 Southeastern Conference) snapped a three-game skid to Missouri after losing five of the previous seven in the series. It was a big win with Mason's job status in his sixth season questioned loudly after a blowout loss to UNLV a week ago.

Feeling under the gun all week, Mason and his Commodores responded with the program's first win over a Top 25 team since beating No. 18 Kansas state in 2017 and first over a ranked SEC team since downing No. 24 Tennessee in 2016.

"It's been a rough patch, but man I told my team this and I want everybody to understand this ok?" Mason said after the game. "A lot of people want this job, so they think. But I'm the man that's built for this job. Every day man we grind. We grind. Don't question us. Don't question us. Who we are, what we do or how we play. We're Vanderbilt men."

Missouri (5-2, 2-1) came in leading the SEC East waiting for the Tigers' appeal of NCAA sanctions to be heard. The Tigers also played their first game since moving into the Top 25 with a five-game winning streak — all at home. The crowd was announced at 23,900.

"When you come in an environment like this, you're on the road you got to bring your energy and I feel like we just (didn't) come ready to play," Missouri quarterback Kelly Bryant said.

Vanderbilt held Missouri to a season-low in points with the Tigers 17th nationally averaging 38.8 points a game. The Commodores sacked Bryant three times, and Allan George intercepted Bryant's pass in the end zone with 6:44 left in the third quarter.

Missouri had a chance to tie except Vanderbilt sacked Bryant for the third time, and Tucker McCann pulled a 48-yarder wide left for his second missed field goal. Neal and Vanderbilt ran out the final 6 minutes for the win.

"We got out-coached, and I think we got out-executed the entire four quarters," Missouri coach Barry Odom said.

Neal started the first six games of the season only to be benched for Mo Hasan against Missouri. The walk-on junior college transfer who had thrown only six passes last season as a backup became the third quarterback this season to jump-start an offense that has been one of the nation's worst.

Missouri safety Tyree Gillespie knocked Hasan out of the game late in the third quarter, going low and leading with his helmet as the Vanderbilt quarterback slid at the end of a run. Hasan was visibly woozy as he stood up, and Gillespie was ejected for targeting after review.

Neal came in, and Missouri linebacker Cameron Wilkins intercepted his first pass and went 42 yards to the Vandy 6. Larry Rountree ran 6 yards for the tying TD on the next play as Missouri tied it at 14 with 1:37 left in the third.

But Neal drove the Commodores 65 yards and capped the drive with the toss that Johnson took to the end zone for the lead.

Missouri: The Tigers came in having scored 31 or more points in 11 straight games, the second-longest streak nationally behind only Oklahoma (16). That ended against a Vanderbilt defense that came in ranked 124th out of 130 FBS teams allowing 482.7 yards a game. The Tigers also hurt themselves season-high 12 penalties for 120 yards.

"We won't beat anybody when we do that," Odom said.

Vanderbilt: Mason said he decided last weekend that Hasan would start, a decision announced at the end of pregame warmups. He also said the quarterback wanted to return, but Mason wanted to be cautious with an open date up next. Hasan was 7 of 11 for 120 yards and a TD, and he ran nine times for 34 yards before taking the hit to the helmet.

The Tigers' stay in the Top 25 likely ends at one week when the poll comes out Sunday.

The Commodores' biggest defensive move came with coordinator Jason Tarver moving from the sideline to the coaches' box. They responded by giving up a season-low in points and fewest by an SEC opponent since a 38-13 win over Tennessee last season. They also held Missouri to 3-of-15 on third downs while notching a season-high eight tackles for loss. The Tigers managed 293 yards of total offense.